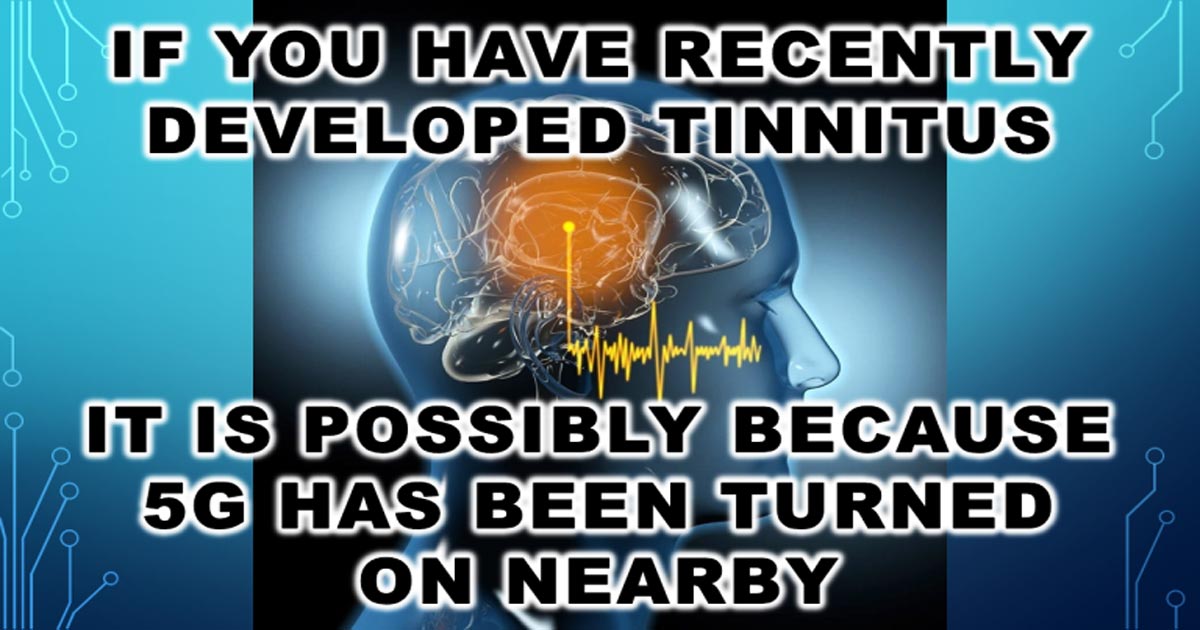 I’m sharing my personal story and a little bit of research.  It’s uncharacteristic of me to share my personal views but I’m doing this so, together, we can try to work out what could be happening.  In return, I’d be interested to hear your thoughts and your experiences.

I live in the UK.  I haven’t had a PCR test, any Covid injections, any Flu vaccines, nor – excepting the odd occasion in a shop in the first few months of the “pandemic” in 2020 – worn a face covering, a cloth version.  I do not have “long Covid” or any symptoms the official narrative could remotely describe as such.  I am not on any medication – I’m not an advocate of taking even pain relievers or headache tablets unless absolutely necessary – and I have no “underlying health conditions.”  In fact, I am generally asymptomatic, what we call – generally healthy.

About two-and-half -months ago I developed what I can only describe as something, I can only imagine being, like tinnitus.  During the day the hubbub of life drowns the buzzing out and it is in the still of the night it’s unavoidably noticeable.  There hasn’t been a single night since two or three months ago that I haven’t been annoyed by it.

I wouldn’t describe it as a sound in my ears but rather a high pitch buzzing emanating from my entire skull.  Starting about a month ago, most nights, the higher pitch buzzing is joined by a second lower continuous humming.  The lower hum changes pitch – I’ve “heard” it changing – from one pitch to another, usually only once in any particular night.

After some weeks, I started suspecting this wasn’t a symptom of an ailment and began wondering if it could be something to do with Wi-Fi frequencies. So, I checked:

“5G frequencies are what mobile networks use to send data between masts and mobile devices, such as smartphones. The same technology is used for 4G and 3G, but the frequencies differ. At mid-August, the 3.4GHz band, the 3.6-4GHz band, and the 700MHz band were being used for 5G in the UK. Ofcom is known to be freeing up spectrum in the 8GHz and 26GHz bands, as well as the 1492-1517MHz band, the latter of which should be available by December 2022.” – 5G News

For many weeks I’ve been checking and my smartphone shows it is receiving 4G from the mobile network and 5GHz from my domestic Wi-Fi hub – I have the insufficient technical knowledge to know what that could mean but it seems, using the bands 5G News mentions, 5G has not been “turned on” within my vicinity.  Anyhow, I’ve tried turning off my phone at night and the buzzing from my skull continues.  I’ve considered turning off the Wi-Fi hub at night but reasoned, rightly or wrongly, if that’s what is causing it, where ever the hub receives its signals from will still be transmitting whether my domestic hub is powered up or down.

I haven’t visited, or otherwise, my GP to ask what may be causing my tinnitus if that’s what it is.  I’m speculating it’s a 50/50 chance whether an “official narrative diagnosis” will be pulled out of the hat, “long Covid” for example; or, a genuine evidence-based medical diagnosis will be reached but to find out – I’ve felt the risk of running the “PCR test / Covid injection gauntlet” the doctor may promote or insist on – isn’t a price I am willing to pay.  As if that wasn’t enough to dissuade me, the mental energy required to endure any likely lectures on why I’m not wearing a face mask in the doctors’ surgery, etc are best kept in reserve for more important visits.

Up until now, it hadn’t occurred to me that there may be others out there going through something similar.  On independent media, I had only seen information regarding tinnitus being an effect of the Covid injections, which I haven’t had.  Then I saw the video below by La Quinta Columna.

Some people living near 5G antennas have been complaining about hearing buzzing and annoying noises since they have been activated and raised it with La Quinta Columna:

This seems to confirm what I have been experiencing and suspecting and it inspired me to do some quick research which I’m sharing below.

Havana Syndrome, which reportedly causes symptoms like dizziness and tinnitus, first emerged in 2016 when various United States embassy staffers complained of feeling sick in Cuba and other parts of the world. A National Academies of Sciences (“NAS”) panel concluded in 2020 that microwaves were the “most plausible” cause of the symptoms.  This contradicts an earlier report, the 2018 JASON report, claiming Havana syndrome incidents were “most likely” caused by insects.  The comparison of conclusions from the NAS report versus the JASON report as to the causes of Havana Syndrome seems to indicate the type of suppression of information Claire Edwards mentioned.

Corporate media is reporting that an increase in tinnitus cases is due to Covid or Covid injections.

In July the Mirror reported, “Long haulers from around the world have reported hundreds of suspected signs and symptoms of Long Covid, ranging from tinnitus to brittle nails, a study from University College London’s Sainsbury Wellcome Centre has found.”  However, the Wellcome Trust has a vested interest in Oxford/AstraZeneca’s Covid injection.

In April, The Sun reported, “Hundreds of people have complained of tinnitus after receiving a Covid vaccine.”  The Daily Mail reported, “At least 1,500 people complain that they developed ringing in the ears after their vaccine.”

A vaccine reaction survey confirms these reports. The survey, as updated to 17 July 2021, showed 19% of respondents experienced tinnitus.  And individuals are confirming it as well.  A registered nurse in Australia, who is currently a clinical call handler, has blown the whistle as to what she is witnessing: “adverse events that have been reported to me are extremely concerning in both the types of reactions and the frequency of them.  Apart from the usually expected side effects of over, pain, etc for 1 to 2 days, some of the reactions that have been reported to me multiple times include: … Severe vertigo and tinnitus (Pfizer).”

For the full list of adverse reactions to Covid injections the Australian nurse/call handler has witnessed see her statement, as copied from the Telegram Channel: Frontline Workers Speak Out, attached below.

The British Tinnitus Association says “it’s hard to pinpoint the exact cause of tinnitus, but it’s generally agreed that it results from some type of change, either mental or physical, but not necessarily related to the ear. Indeed, tinnitus is not a disease or illness in itself, but rather a symptom of an underlying condition.”

There could be numerous medical reasons, including Covid injections, for tinnitus such as that given by the Austrian health minister, Rudolf Anschober, who resigned stating he was “powered out” after being diagnosed with high blood pressure, high blood sugar, and tinnitus – which he described as the “logical consequences” of overworking during the pandemic.  But I know that mine, if it is tinnitus that I have recently developed, has not been caused by high blood pressure, high blood sugar, sickness, overworking, or stress during the “pandemic.”

How do I know?  Because I don’t have high blood pressure, I don’t have high blood sugar, and having previously lived under a socialist dictatorship I have lived through far worse periods of overworking and stressful situations – some life-threatening – and I don’t have “long Covid” nor have I had a Covid injection.  I am unaware of any mental or physical changes in recent months nevertheless, I have developed tinnitus-like symptoms.  I would like to understand why.