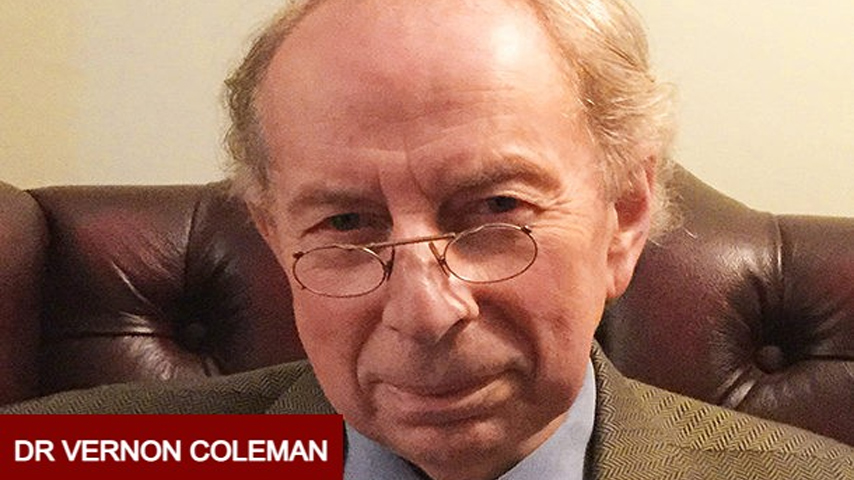 YouTube was doubtless a good idea when it started. I expect the originators may have had good intentions – they, perhaps, hoped to provide members of the public with a place for new ideas and for discussion. But I fear that the platform has allowed itself to become a tool of the devil-worshipping oppressors who are working hard to destroy mankind.

If you do stupid things on roller skates or leap out of a tree into a vat of blancmange then your videos will be safe. YouTube doesn’t censor the puerile or the pathetic.

But the platform’s censors do not approve of facts, free speech, original thought or any sort of public debate.

The blancmange and the roller skating gerbils are fine. But anything which includes facts and opinions is likely to find itself on the equivalent of the cutting room floor.

The pathetic lies and abuse from corrupt doctors and fraud-happy drug companies are never touched. The feeble-minded trolls are easily ignored – the trolls who so eagerly spread libels are clearly a bunch of ignorant half-wits. Their lies and deceptions are blatant and laughable. Talking of abuse, I have a fine collection of screenshots of libelous remarks made on the pages behind my Wikipedia entry. Excellent and useful evidence.

But in theory, the censorship of free speech is threatening the last remaining vestiges of our freedom. And in practice too.

The internet is important because as we have seen, the mainstream media have been bought. The BBC was always going to defend the indefensible – it has, after all, taken money from the European Union and Bill Gates – but I am shocked and saddened at the way that other television stations and national newspapers have managed to bend their knees and, at the same time, bend over to facilitate the desires of the remorselessly wicked cabal so clearly determined to rule the world.

We have built this society. It is our responsibility. If we stay silent then the evil will be done with our blessing.

It has always been up to us to shout ‘stop’ when we have had enough of the wickedness around us. We all have a voice we can use and we all have a duty to make sure that our voice is heard. If we remain silent then we are just a part of the evil that is corrupting and destroying our world.

We have to ignore the sad individuals who scoff or mock – either because they have been bought with a purse of silver or because they are too unintelligent to understand the nature of the war we are fighting. We must not allow ourselves to be put off by scorn, derision, undisguised contempt or a lack of support or encouragement from others.

Look through history and we can all see that imaginative, thoughtful and creative individuals have always had a hard time. Look back and you will find countless examples of citizens who were harassed or persecuted simply because they dared to think for themselves – and tried to share their thoughts with others.

The sad fact is that our world has never welcomed the original, the challenging, the inspirational or the passionate and has always preferred the characterless to the thought provoking.

Those who dare to speak out against the establishment have always been regarded as dangerous heretics. The iconoclast has never been a welcome figure in any age.

Confucius, the Chinese philosopher, was dismissed by his political masters and his books were burned. Those who didn’t burn his books within 30 days were branded and condemned to forced labor. Two and a half thousand years later Confucius’s influence was still considered so dangerous that Chairman Mao banned his works.

Described by the Delphic Oracle as the wisest man in the world, Greek teacher Socrates was accused of corrupting the youth of Athens, arrested for being an evildoer and ‘a person showing curiosity, searching into things under the earth and above the heaven and teaching all this to others’. Socrates was condemned to death.

Dante, the Italian poet, was banished from Florence and condemned to be burnt at the stake if ever captured.

After they had failed to silence him with threats and bribes the Jewish authorities excommunicated Spinoza in Amsterdam because he refused to toe the party line, refused to think what other people told him he must think and insisted on maintaining his intellectual independence. He and his work were denounced as ‘forged in Hell by a renegade Jew and the devil’.

Galileo, the seventeenth-century Italian mathematician, astrologer and scientist got into terrible trouble with the all-powerful Church for daring to support Copernicus, who had the temerity to claim that the planets revolved around the sun.

Aureolus Philippus Theophrastus Bombastus von Hohenheim (known to his chums as Paracelsus) made himself enemies all over Europe because he tried to revolutionize medicine in the sixteenth century. Paracelsus was the greatest influence on medical thinking since Hippocrates but the establishment regarded him as a troublemaker.

Ignaz Semmelweiss, the Austrian obstetrician who recognised that puerperal fever was caused by doctors’ dirty habits was ostracised by the medical profession for daring to criticize practical procedures.

Dr. John Snow fought two huge battles. He introduced anesthesia for women in confinement and by removing the handle from the Broad Street pump in Soho he helped prevent the spread of cholera in London. Both battles brought him enemies.

Henry David Thoreau, surely the kindest, wisest philosopher who has ever lived, was imprisoned for sticking to his ideals.

These are all my personal heroes. They show that original thinkers and people who do not fit neatly into the scheme of things have never gone down well. You and I are in good company

And nothing has changed over history.

The unusual or the eccentric attract scorn and ridicule. Politicians are frightened of anything new or challenging. They reject the innovative, the creative and the imaginative in favour of the accustomed, the comfortable and the ordinary. It is hardly surprising that the sensitive, the thoughtful, the imaginative and the caring find twenty first century life almost too painful to bear.

But this isn’t simply a battle for the right to say new or unthinkable things.

Whenever we feel that something is wrong it is our duty as human beings to stand up for our principles, to shout and make our voices heard.

There is a chance that some people will regard us as lunatics.

Many small-minded people will sneer and tell you that in trying to change the world and root out dishonesty, corruption and injustice we are tilting at windmills. But there is also a chance that our voice will be heard; that others will respond and that we will win our battle.

But we really don’t have a choice.

If we fail to fight then we will lose the world we know.

On this occasion, the benefits of victory far outweigh the insults of the insignificant. And, after all, only when you’ve found something you are prepared to die for will you really know what life is all about.

The battle you and I are fighting is the most important battle any of us will fight. It’s crucial to our lives, our world, our beliefs, our humanity, our mental and physical health, our spirituality and our future. It’s crucial too to future generations and to the planet God gave us.

Doctors and nurses have been forbidden to question the official line – even when it is patently wrong. They have been banned from speaking to the media.

You and I prefer to think for ourselves, and to do the right thing whatever the cost, and we cannot be bought or pressured to do the wrong thing.

The War On Germany Just Entered Its Hot Phase