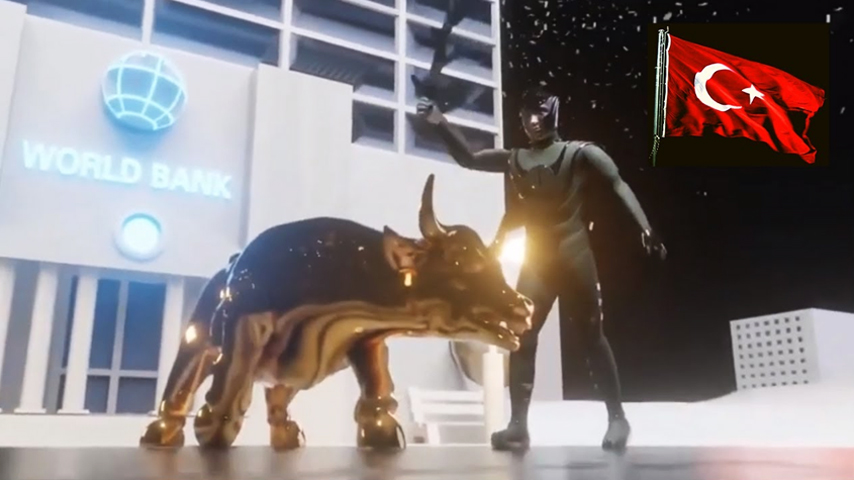 “I Pet Goat 3”  prophesize an Islamic New World Order. Watch the video below

I Pet Goat 3 opens with a virtual reality version of Trump and Joe Biden fighting on the roof of a traditional China home known as a Siheyuan. A historical type of residence that was commonly found in China’s capital Beijing. Trump and Biden are fighting it out to see who will serve the dictates of communist China for the next four years.

As the camera pans back an oversized pyramid with the all-seeing eye comes into view. A  reminder to all the national leaders, who actually rule the world.  Quickly flashing across the screen are two images of the coronavirus and its original connection back to China, the source of the purposeful outbreak.

For a moment we are shown the anti-christ seated on his throne inside the pyramid with a crown engraved with the all-seeing eye. Aligned on either side of his throne are the military leaders of the world standing at attention, waiting to follow his orders with unquestionable allegiance.

In the following scene, a Trans-human hybrid is dancing, while a UFO or military V shape aircraft destroys the Eifel Tower. Could the hybrid be the result of the DNA-changing vaccine? At the same time, an oversized hypodermic needle is injected into a body lying on the ground. It appears there is a connection between the destruction of the Eifel Tower and the multiple deaths due to the vaccine.

Given the large population of Muslims in the city of Paris, the military could knock down the iconic structure, only to put the blame on radical Islam as the justification to start a Middle Eastern war. Of course, a strategy that has never been used before…

Starting a war could also be a distraction from the many deaths resulting from the DNA morphing injection.  As the world begins to slowly wake up from the vaccine deception, war and rumors of war supplant any further discussion about the vaccines.

Immediately, we see a lighted Phoenix, a symbol of resurrection, performing the task of a stork, by delivering a baby, who is the Twelfth Mahdi. Shia Muslims believe the twelfth and final Imam is Muhammad al-Mahdi, who is hidden and will return to bring justice to the world during a time of great tribulation.  His followers, known as Twelvers, believe he is alive. Although the Mahdi isn’t mentioned in the Koran, his exploits are foretold in the Hadith. Shai believes Jesus Christ or Isa will arrive with the Mahdi to defeat the antichrist or false messiah.

The baby delivered by the stork is now a full-grown man and revealed as the Twelfth Iman He begins to lead his followers in worship to Allah. We are then taken back to an overview of the pyramid as an alien UFO docks its craft inside the pyramid. The antichrist, who is seated in the pyramid, aligned with the military leaders of the world, emerges from the pyramid, With the assistance of the interdimensional UFOs the antichrist locates the Ark of The Covenant buried under the stone floor of the Third Temple. Removing the cover reveals Aaron’s rod and the original Torah.

We then see the Ark of The Covenant sitting center stage during a world press conference, when is it revealed the original Torah, found in the Ark of The Covenant, states Mohammed is the messenger of God. The true gospel was written by Ahmad Mohammed. As further proof, it is pointed out the Gospel of Barnabas contains the same verse as the Koran.

Next, an American eagle, symbolizing the United States is shot down by Islam who view the United States as the great whore of Babylon. The eagle crashes in front of a strip club to symbolize its debauchery as a nation and the sign in front of the club changes from democracy to demo freedom.  America’s demonstration of freedom has ended.

An image of the Koran page 64 appears, written in Arabic. Translated in English it states “Ye are the best of peoples, evolved for mankind, enjoining what is right, forbidding what is wrong, and believing in Allah. If only the People of the Book had faith, it were best for them: among them are some who have faith, but most of them are perverted transgressors.” The people of the book are the Jews and Christians. This passage is condemnation for them not following the commandments of their book.

In the following scene, we are taken to New York City and the head of the bull, symbolizing the bull market of the US stock market is decapitated. Hyperinflation follows as dollars bills rain down from the sky.

We then see the flag of Israel, the star of David becomes a hybrid star of David with an Islamic inscription in the middle of the star. Because there is now no difference between Islam and Judaism the two religions merge as one, leading to a One World Religion. And it is this hybrid flag that is flown above the newly constructed Third Temple which was built adjacent to the Dome of the Rock. For the first time in history, the Jews and Muslims are living in peace, each free to worship at their temple and shrine on the Temple Mount in the Old City of Jerusalem.

Coming into view is the Islamic flag with the word “HUDHUD” inscribed on a monolith, which deals with the wisdom of the 12th Iman.  Humans are not able to understand the languages of the birds. But the 12th Iman has the abilities to know what animals like the HUDHUD bird, see, hears, understands and thinks, as the bird was trained by the Prophet to collect information like humans.

With this intuitive knowledge, the 12th Iman approaches the all-seeing eye on the pyramid and stabs it with his sword. We are then taken to Mecca where multiple peace doves fly in concentric circles around the Kabba with Muslim worshippers

The video then pulls back from Mecca to show the entire earth. Finally, a banner comes into view with the word “Peace.”