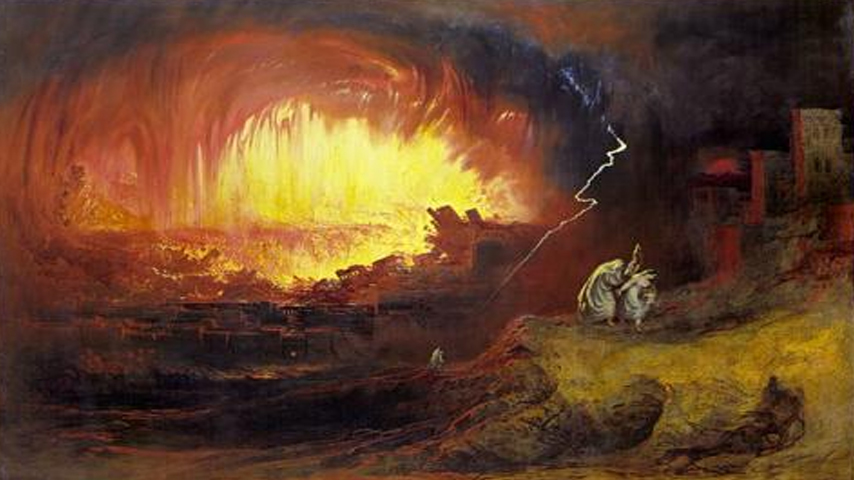 The Left is the embodiment of perversion and evil. Whether it is men going into girls restrooms, men competing as women in sports or just the 97 genders are elementary school children are being forced to choose from when they are 5 years old, we are living in the times of Sodom and Gomorrah.

In Genesis 19, the Bible speaks to God’s judgment of the unholy, the perverts and the evil.

I believe that history is a great teacher and we can all benefit greatly from learning the lessons of history and the Bible is the greatest History book ever written.

The story of Sodom and Gomorrah has special relevance to the time and place that we live in today. The bankers, which have hijacked our government through legalized bribery (i.e. the PACs), consist of people from such organizations like Goldman Sachs, Wells Fargo Wachovia and HSBC banks. Goldman Sachs has collectively been convicted for things like child trafficking, running drugs, laundering drug money, stealing investors’ money, having foreknowledge and moving money as proof of foreknowledge to events like 9/11, the housing bubble, and the Gulf Oil Explosion, etc.  Nobody ever goes to jail, they just pay a small fine, as part of the cost of doing business, and they continue spreading their poison among humanity.

The aforementioned organizations are run by individuals who are pure evil. They use graft, corruption and murder to obtain their goals. They answer to no authority and their values represent the worst of what the Bible refers to as Satanic.

If Jesus were to walk the sidewalks of Wall Street, he would chase these Satanic money changers from their money temples as he did over 2,000 years ago.

Abraham asked if the Lord would spare the two decadent cities if fifty righteous people lived there. The Lord said yes. Boldly, Abraham kept bargaining down, until God agreed not to destroy Sodom and Gomorrah if even ten righteous people lived there. Then the Lord departed. Unable to find even 10 righteous men, the Lord subsequently rained down burning sulfur on Sodom and Gomorrah, destroying the buildings, the people, and all the vegetation on the plain. This is our future if we do not repent and rediscover our true Christian heritage. The wages of sin are death and destruction. Apparently, we have learned very little from the lessons of history.

If the Lord were to visit Washington DC, he would find that there were not 50 righteous men, there were not 40 righteous men, not 30, not 20, not even 10 righteous men and just like Sodom and Gomorrah, we will surely be destroyed. Our government is the source of nearly every war on this planet which kills and maims untold numbers of innocent people including the very old and the very young. Our government is controlled by the minions of the NWO, many of which are empowered to serve Lucifer. Our government and our military no longer serve the people of this country. Prior to the 2008 first round of bailouts, a former Goldman Sachs executive and the Secretary of the Treasury stated that if we did not bail out Wall Street, we would see tanks and troops in our streets in one of the most treasonous statements ever uttered by a government official. And before the Libyan invasion, the Congress was told that our military was now under the control of NATO and the UN and that they had no say in whether we go to war, or not. Our country and government have been totally hijacked and it is not just the bankster thugs who have stolen our most precious resources. The minions of the NWO are controlled by Satan. This is not hyperbole, please consider the following quote from a United Nations official:

IF YOU WONDERED WHERE THIS WAS GOING, I THINK YOUR QUESTION WAS JUST ANSWERED!

JESUS IS IN THE ONLY ESCAPE!