An investment firm directed by President Joe Biden’s son Hunter Biden was a leading financial backer of a pandemic tracking and response firm that collaborated on identifying and isolating deadly pathogens in Ukrainian laboratories, receiving funds from the Obama administration’s Department of Defense in the process, The National Pulse can exclusively reveal.

Rosemont Seneca Technology Partners (RSTP) – a subsidiary of the Hunter Biden and Christopher Heinz-founded Rosemont Capital – counted both Biden and Heinz as managing directors. Heinz is the stepson of former U.S. Secretary of State and current Climate czar John Kerry.

Amongst the companies listed on archived versions of the RSTP’s portfolio is Metabiota – an ostensibly San Francisco-based company that purports to detect, track, and analyze emerging infectious diseases.

Financial reports reveal that RSTP led the company’s first round of funding in 2015, which amounted to $30 million. Former managing director and co-founder of RSTP Neil Callahan – a name that also appears many times on Hunter Biden’s hard drive – sits on Metabiota’s Board of Advisors alongside former Clinton official Rob Walker who discussed, in another unearthed Hunter Biden hard drive e-mail, reaching out to the Obama Department of Defense with regard to Metabiota.

In July 2021, The National Pulse exclusively revealed the connection between Metabiota, Hunter Biden, and the pandemic-linked EcoHealth Alliance which worked closely with Anthony Fauci’s National Institute for Allergy and Infectious Disease (NIAID) and the notorious Wuhan laboratory.

Today, we can exclusively reveal an official connection between the Biden-linked pandemic firm and biological laboratories based in Ukraine. In early March we revealed how these labs were handling “especially dangerous pathogens” through programs funded by the U.S. government. The potential for such entities to fall into the hands of invading Russian forces has come under hotly disputed scrutiny in recent weeks.

A feature in the Science and Technology Center in Ukraine’s (STCU) 2016 Annual Report recounts a “Trilateral Meeting with Ukraine, Poland, and the United States Regional Collaboration on Biological Security, Safety, and Surveillance.”

The article describes, in particular, an October 2016 meeting involving U.S. military officials and their Ukrainian counterparts discussing “cooperation in surveillance and prevention of especially dangerous infectious diseases, including zoonotic diseases in Ukraine and neighboring countries.”

In attendance were representatives from the Biden-linked Metabiota, roughly one year after Hunter’s investment funds put cash into the company. Attendees also included:

“The meeting focused on existing frameworks, regulatory coordination, and ongoing cooperative projects in research, surveillance and diagnostics of a number of dangerous zoonotic diseases, such as avian influenza, leptospirosis, Crimea Congo hemorrhagic fever, and brucellosis,” explains the summary:

“In the framework of the workshop, special breakout meetings of Ukrainian scientists with their European and American counterparts were jointly organized by the STCU, DTRA and Metabiota Inc… During those breakout meetings, specialists from each country worked to establish effective contacts in order to encourage future cooperation, as well as to identify future scientific projects with Ukrainian and western veterinary institutions in the area of ASF control and investigation.”

Government contracts also corroborate the working relationship between Metabiota, Ukrainian laboratories, and the U.S. Defense Department, with the firm receiving an $18.4 million grant from the U.S. agency in 2014. A total of $307,091, allocated to Metabiota on September 25th, was itemized for “Ukraine research projects.”

Several scientific papers – including those isolating strains of deadly pathogens like “virulent African Swine Fever Virus” – appear to have been published following the grant.

A 2019 paper titled “Complete Genome Sequence of a Virulent African Swine Fever Virus from a Domestic Pig in Ukraine” was authored by researchers from Metabiota and three Ukraine-based institutes.

The researchers, whose work is described as being “funded by the U.S. Defense Threat Reduction Agency (DTRA) through the Biological Threat Reduction Program in Ukraine,” isolated the strain of the deadly virus using a pig from Ukraine:

“Tissue samples were collected from a domestic pig from ASF outbreak number 131 in Kyiv Oblast, Ukraine, in 2016. The samples were frozen, and total DNA was extracted in duplicate from spleen tissue using the PowerMicrobiome RNA isolation kit (Mo Bio) following the manufacturer’s protocol.” 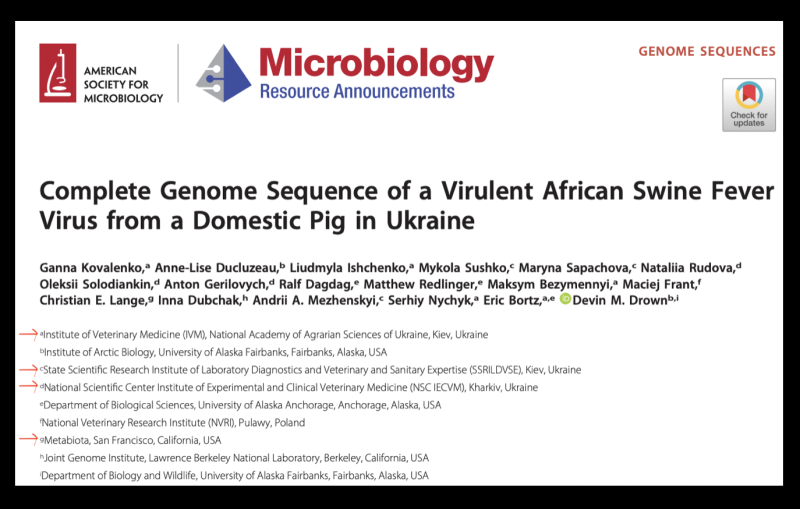 Furthermore, a 2014 paper “Spatio-Temporal Patterns of Livestock Anthrax in Ukraine During the Past Century (1913-2012)” lists an author, Artem Skrypnyk, then affiliated with a Ukraine-based branch of the pandemic firm.

“Our primary objective was to examine the spatiotemporal dynamics of the disease and identify areas where anthrax may persist in the present day,” posits the paper.

“Examining the historical epizootiology of a disease can identify the geographic extent of environmental foci, define areas prone to repeat outbreaks, and lead to a better understanding of natural disease cycles.”

Skrypnyk is also listed as a Metabiota scientist in other papers including “Dynamics of anthrax cases in Ukraine during 1970-2013,” “Anthrax in Dogs,” and “Serological Anthrax Surveillance in Wild Boar (Sus scrofa) in Ukraine.”

“We tested wild boar serum samples collected across Ukraine for antibodies to B. anthracis and determined whether exposed boars were associated with livestock anthrax hotspots,” explains the paper.

Skrypnyk, the Metabiota-affiliated researcher, worked as Veterinary Project Coordinator for the Biden-linked firm before moving on to serve in his current role of Technical Officer for Laboratories for the World Health Organization (WHO).

Additionally, two researchers – Nataliya Mykhaylovska and Bradford Raymond Brooks – are listed as Ukraine-based Metabiota researchers in a paper titled “Implementation of a Regional Training Program on African Swine Fever As Part of the Cooperative Biological Engagement Program across the Caucasus Region.”

The aforementioned paper even references a Metabiota office in Ukraine’s capital city of Kyiv, whose existence appears to be corroborated by a summary of the company’s operational structure. 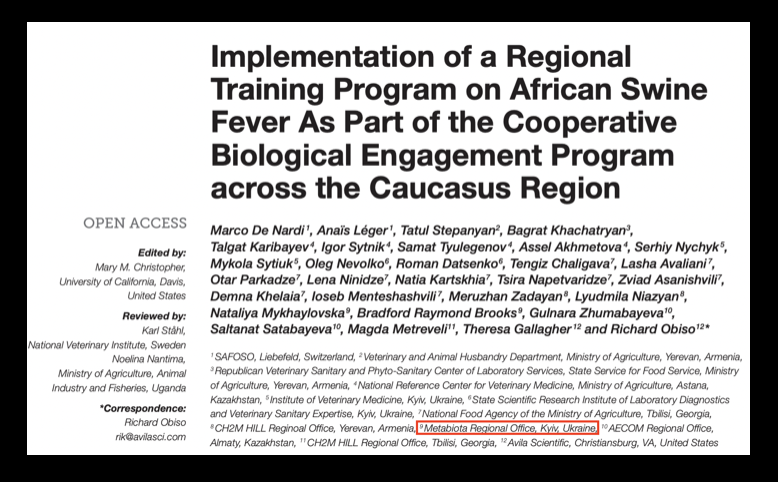 He also explains how the company liaised with “Government of Ukraine officials” from agencies including the Ministry of Defense.

Another Metabiota employee – Dr. Petro Mutovkin – who served as a Human Biosurveillance Specialist and Project Manager from 2015 to 2016 reveals his role in “facilitating activities within US Department of Defence Cooperative Biological Engagement Program (CBEP) in Ukraine” on his LinkedIn profile.

“Laboratory facility assessment, laboratory diagnostic and BS&S training, [and] biological risk assessment and mitigation” are among the other tasks he engaged in.