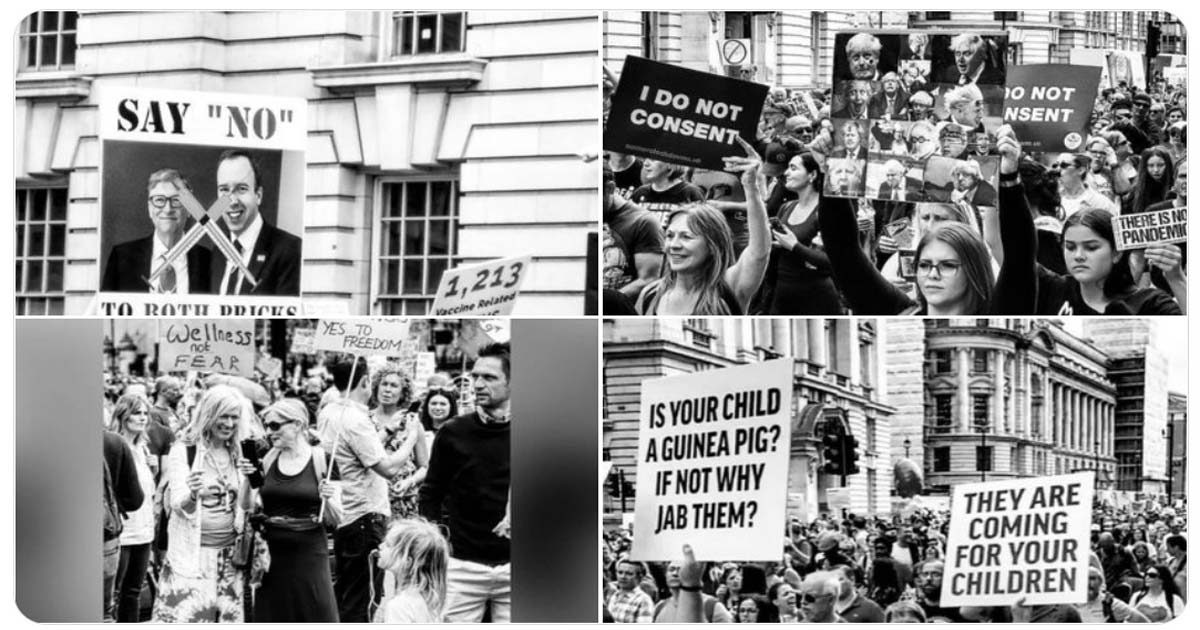 Massive crowds took to the streets of London today to protest against COVID tyranny.

Video footage from the air and on the ground shows massive crowds.

#londonprotest What an amazing day today in London. It felt like the biggest march yet, an amazing atmosphere with so many brilliant and lovely people. Well done everyone. Picadilly Circus rammed…. pic.twitter.com/KEjOkvCirG

Right now in London – people from across Britain are making themselves heard.

I like the sign this woman is holding in the first frame of the video clip below:

We’re Not From the Left or Right We’re From the Bottom and We’re Coming for Those on TOP!

It appears that race and political affiliation were put aside in this protest, which is what is needed if the masses are going to have any effect against the Globalists.

#londonprotest well today’s protest even got coverage on BBC, ITV and Sky. What are they up to? They ignored the protests on 15/5/21 and 29/5/21. Possibly this was the biggest one yet? #freedom #TakeOffYourMask pic.twitter.com/b5NwZmrobV

Saving the children from the bioweapon shots seemed to be a common theme.

We won't be just another brick in the wall nor our children. Ever. To the last "bullet" if necessary✊#londonprotest pic.twitter.com/kI2xkMGcGu

And where are similar protests in the USA?

Oh, that’s right. You have to go to a public school board meeting to see parents up in arms about COVID measures because they want to keep using the Nanny State’s school system to babysit their children so they don’t have to.

And if we do see protests, they will probably be much smaller than this one in London today, with BLMers on one side and Trump supporters on the other, and they won’t be protesting against the Globalists, but fighting each other instead.

If the masses do rise up together to overthrow tyranny, I’d bet on the UK over the US any day. It looks like they are fairly unified in taking down Boris Johnson and the rest of the hoodlums in Parliament.