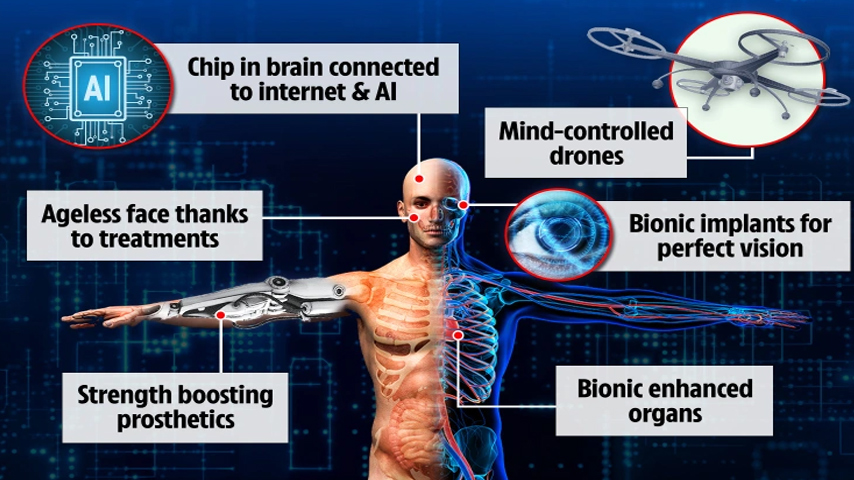 HUMANS in the next 100 years could be part-machine, part-flesh creatures with brain chips and bionic limbs and organs in a vision of “cyborgs” once described by Elon Musk.

Men and women born around 2100 could live in a world very different to ours as humans may be totally connected to the internet and meshed together with artificial intelligence.

Mobile phones would no longer be needed – as everything you now do with your smartphone will now be done with a chip in your brain.

With just a thought you could bring up an answer on Google, send a message via WhatsApp, or even control your personal drone to do errands for you.

Scientists and futurists have predicted that aging could be nearly totally eliminated through a mixture of treatments and bionics.

And some humans may choose to have their limbs amputated and replaced with more powerful robotic prosthetics.

Futurist and transhumanist Zoltan Istvan, who has twice run to be US President, described his vision of the future to The Sun Online – saying its imperative humans must merge with AI.

And he said that humans are already on the way to soon heading down to “body shops or supermarkets” to upgrade themselves.

Twitter boss Musk has previously described a world where humanity must become more integrated with technology to compete with AI.

And when speaking to The Sun Online Istvan said he agreed with the billionaire about the dangers we face.

“Musk is absolutely right,” he said.

Istvan also said “gene editing” – such as designer babies or splicing your genes to improve your health – is one of the most interesting developments on the horizon.

He called on the government to ease the red tape of regulation to allow for more innovation that could “save and improve millions of lives”.

“People may say there will never put something in their body, but just wait until their neighbor does it, and that neighbor then becomes a more sought-after employee,” Istvan told The Sun Online.

“We live in a competitive world, and transhuman technology makes us more competitive, so we will accept the upgrades to succeed.”

We have a right and a moral obligation to use science and technology to eliminate suffering and the biological functions that cause us to die.

But while we may become tech-based superhumans, the big threat hanging over us is AI.

Istvan told The Sun Online: “I think an AI that’s as smart as humans will be the biggest advance, and that will probably happen in 25 years or less.”

“But the bigger issue is then how much smarter that AI becomes than us.

“I suspect within a few years of its inception, it will already be thousands of times smarter than us, then eventually millions of times more intelligent by 2100.

“We must attempt to merge with this AI before it becomes too smart, or humans will be totally left behind, and the planet will belong to AI, not to us.”

He warned one of the biggest dangers of this technological advancement is creating a two-tier society – where the rich become “transhuman gods” and the poor are left behind.

“This is the biggest danger of transhumanism, that we create a dystopia,” he told The Sun Online.

“For this reason, I advocate governments taking a close look at how to make sure transhuman technology can be available to all.”

Istvan called for more discussions of the merging of tech and mankind as it will be a “one-time transformative experience” for the human race.

“Great care must be taken, but don’t be fearful. Human beings suffer much and then they die,” he told The Sun Online.

“We have a right and a moral obligation to use science and technology to eliminate suffering and the biological functions that cause us to die.”

He added: “We just must do so in a way that doesn’t alienate humans from each other. I think everyone will eventually agree that humans using technology to live far better, more healthy lives is a good thing.”

Tech mogul Musk announced earlier this month that his brain chip Neuralink will soon be ready for human trials.

He hopes the brain chip will allow the blind to see and the paralysed to walk.

He dreams that one day people will be able to control computer functions just by using their minds via Neuralink.

Musk previously described that humans are “already cyborgs” due to how closely linked we are with our tech.

“The phone is almost like an extension of yourself. If you forget your phone, it’s like a missing limb,” said Elon.

The billionaire warned if we do not catch up that “we will be far, far surpassed in every single way”.

Other technology being developed includes a plan originally funded by Facebook for a brain interface.

It would also allow you to control devices with your mind – being able to simply “think” your text messages.

The company was being developed at the mysterious Building 8, but the company discontinued the project in 2021.

Facebook instead is focusing on an experimental wrist device to control computers with your brain.

Biological aging expert Aubrey de Grey meanwhile previously predicted mankind within the next 100 years could have nearly wiped out the aging process.

“I’d say there is a 50/50 chance we will have brought aging under decisive control within 20 years,” he told The Guardian.

Get ready for Google ‘SKINMARKS’, a Smart Tattoo that will turn your Skin into a DIGITAL TOUCHPAD to control your devices via Embedded Sensors

Elon Musk: Neuralink Will Do Human Brain Implant in “Less Than a Year”