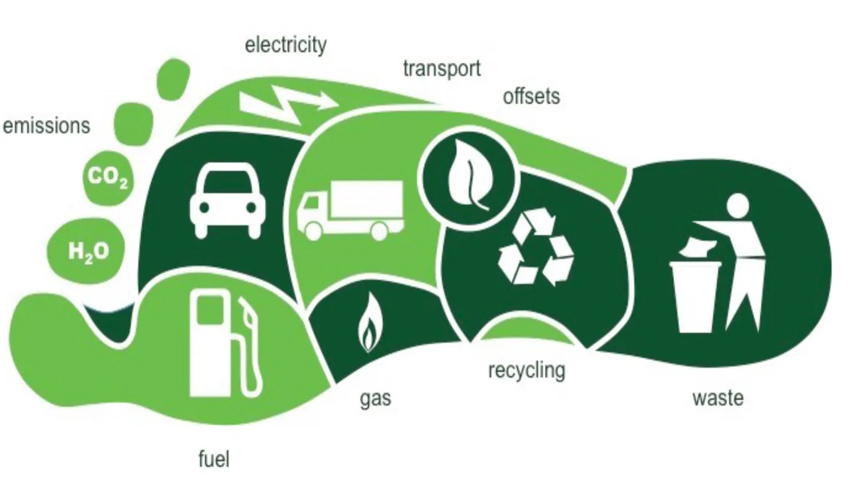 Let me introduce you to Barbara Baarsma. Barbara is the CEO of Rabo Carbon Bank. Yes, you read that right. Not Rabo Bank but Rabo Carbon Bank. In this 53-second video interview below she is advocating for a “Personal Carbon Wallet”. That may not seem like a big deal but when you hear what she has to say you should be concerned, very concerned in fact.

I’ve transcribed the interview as it is in Dutch. It contains critical information. If you prefer to watch the video with subtitles by all means please do so.

Or if someone lives in a small house, he can sell his emission rights to someone who lives in a big house, this way poor people can benefit from the green economy”

Wow. Quite something isn’t it? Let’s pick it apart and then look at how they are probably going to implement it.

You could argue that it’s just another level of taxation that the globalists will take. I think it runs far deeper. When Bankers start using expressions like rights, poor people and a green economy you can be sure that they are envisaging a world for the elite. They don’t give a fig about anyone else.

So in its most basic form, you’ll have no fun and won’t be allowed to travel anywhere. But don’t worry the elites will have the fun for you.

This is nothing more than Totalitarianism.

Did I forget to mention that Rabobank and Baarsma are both in the World Economic Forum.

When most people think of carbon emissions and carbon footprints they think it only refers to travel, fuel, gas and electricity all under the guise of emissions. I hate to break it to you but it runs far deeper than that.

Let me now introduce you to Doc Ono, a company you may never have heard of.

In May 2019 an article appeared on the WEF site called

“This credit card has a carbon-emission spending limit”

In the article it says

Yikes, cuts off their spending.

“The DO card tracks the CO2 emissions linked to purchases to calculate the carbon impact of every transaction. The aim is to encourage people to actively reduce their carbon footprint and demonstrate the impact that small changes can have on the environment.

Now we are getting closer to the truth of how this is going to operate. It isn’t just traveling, it will be for everything.

Mastercard and Doconomy Launch the Future of Sustainable Payments

“Doconomy and Mastercard announce their joint effort to combat climate change by enabling DO – a free and easy-to-use mobile banking service that lets users track, understand and reduce their CO2 footprints through carbon offsetting”

Isn’t it fascinating that they emphasize it will allow the users to track everything? It would never be used for nefarious purposes such as banks and governments tracking everything. Of course not 🙄

Mastercard is also a WEF partner.

The United Nations also got on board in May 2019. They published an article called

And yes, you guessed it, Espinosa and UN are also WEF partners. We are beginning to see a trend here yet again, aren’t we?

The big banks also see this as a massive opportunity. In 2021 Barclays hopped into bed with MasterCard and Doconomy.

We’re teaming up with partners Barclays @ThinkRiseNY + @Doconomy to launch the #ClimateFintech Cards & Payments Challenge – for fintech startups who want to co-create the future of digital payments with us and help tackle climate change. Join us: https://t.co/Z8nXszXtLz pic.twitter.com/D59ll6QyGJ

Seems like full-on surveillance and socialism to me. And you probably don’t need me to tell you by this stage that Barclays is also a WEF member.

But that’s not even close to what the WEF, Mastercard, UN and all these globalist bodies have planned. You are only being told a fraction of the story.

Let me paint you a picture of how this might play out. In Ireland, back in March of this year, Marc Ó Cathasaigh who is a Green Party TD (MP) paid a visit to a pub called Brew Dog in Dublin. He showed an image of the menu which had CO2 (carbon dioxide) labeling beside every food item on the menu and asked the question

Would this influence what you would order?

Ignore for a moment the eye-watering Dublin prices – look at the CO2 labelling…..

Would this influence what you would order? pic.twitter.com/KJajjRy4p7

On the left side of the menu is your standard chicken, beef, lamb, etc whilst on the right is your ‘plant-based’ food including the lab-processed ‘Beyond Meat’. Bill Gates is also an investor in ‘Beyond Meat’

The other point which is important to mention is that a seed is being planted in people’s minds about the different CO2 levels. They are trying to influence people into the hands of plant-based foods and Beyond Meats. There is no doubt about it that there is an agenda at play.

I have no idea what the criteria was that they used for measuring the CO2 levels but the point is restaurants are beginning to trial this. I read all the comments below the thread with some saying it was a good idea and some said it wasn’t. The problem though was that everyone responding totally missed the point.

Here is what is probably going to happen. When you go out to a restaurant depending on what your “carbon footprint” has been, will determine what you can and cannot order off the menu.

Sounds ridiculous, doesn’t it? Depending on how many points you have left for that month will determine whether you are allowed to eat “proper food” or “lab food”.

If you’ve been a bold boy or girl you’ll only be allowed to eat lab-grown plant-based food so you don’t surpass your carbon quota. If you try to order beef that apparently has high CO2 levels you won’t be allowed to.

This will also be the case when you go to supermarkets to do your weekly shopping. Every item you buy will be assigned a CO2 number.

It gets even more ridiculous though. Within the last month, Eamonn Ryan who is a WEF member and leader of the Green Party in Ireland has advocated for the reduction in the numbers of Irish cattle. Instead, we will import cattle from Brazil. I like to call this the work of the “Ruminati” 😉 If you know, you know.

There are 6million cattle in Ireland.

Brazil plans to increase its national herd by 24million cattle by 2030.

Every cow we cull will be replaced by 4 in Brazil, and we'll end up importing that meat.

This is all, every last bit of it, nonsense.https://t.co/ZEMyrZVM0u

How do you think the carbon footprint of importing beef from Brazil would look like on a menu now? It would be off the charts. Do you see what they are trying to achieve and where this is going?

The whole thing sounds ridiculously Dystopian, doesn’t it? That would never happen. It’s so 1984, I hear you shout. If you have been paying attention to the last 2.5 years then you will realize it’s not remotely far-fetched at all.

We are being told how this is going to pan out. All you have to do is watch an episode of Black Mirror called Nosedive where the topic is social credit scores. Just substitute social credit score with carbon footprints and you will understand. Digital IDs and Currency, Social Credit Scores and Carbon Footprints will all work in tandem in the future.

I mentioned earlier Doc Ono. On their own site, they give another example of how this would work for clothing. Let’s say you wanted to buy a pair of jeans 👖

Imagine going shopping and having to whip out your “carbon calculator” and realize you only have 10 points to play with. You won’t be able to buy the 21.45 CO2 jeans, you’ll have to plump for the 8.98 CO2 jeans. After all, you won’t be allowed to go over your quota or your card will stop working and your digital payment will be declined.

I just mentioned a “carbon calculator”. It just so happens that Mastercard has already developed it.

In a 2021 press release on their site they say

Guess who they have collaborated with. Doconomy. Go Figure.

This will be rolled out in the shape of an app so you can check your carbon footprint which will determine what you can and can’t buy.

But it isn’t just any old “carbon calculator” it’s a 2030 carbon calculator, as in Agenda 2030. If you look closely enough at the top left-hand corner of the image you can see the transition from 2020 to 2030.

It will eventually take the shape of an app that covers all the bases of Digital ID, Digital currency, social credit score, etc. Basically a total control and surveillance grid which there will be no escape from. Welcome to Aldous Huxley’s “Brave New World” and George Orwell’s “1984” rolled into one.

Now whether this happens in reality or not is another story entirely. These are not the rantings of some mad, conspiracy theorist. I’ve tried to provide proof of what is going on in the real world. It’s up to you whether you want to believe it or not and whether we let it happen….

The Covid Orchestra, Board of Trustees “The Names of the People Killing Humanity”

World Bank consultant: “Digital identity is not enough,” suggests a need for access to data