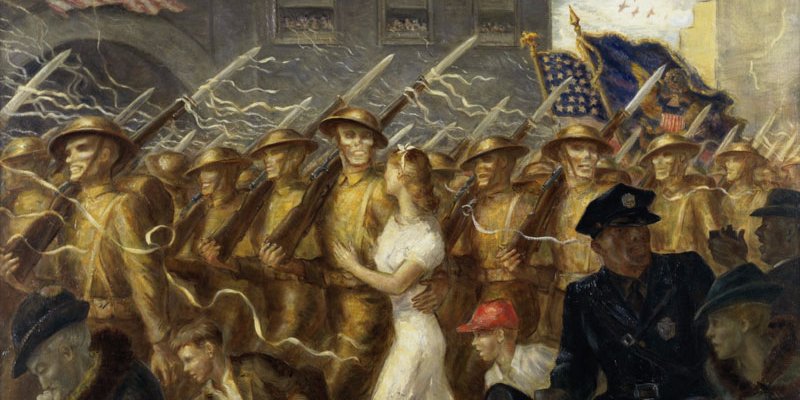 You may think “fake news” is a fairly recent development made possible by the internet and social media. But a little over 100 years ago President Woodrow Wilson created an official fake news agency to persuade the American people to support the United States entry into WWI.

But first a little perspective on what drove Wilson’s unorthodox methods.

Woodrow Wilson was elected President of the United States in 1912. Politically, he was a novice having only served two years as governor of New Jersey prior to his elevation to the Presidency. Wilson’s lack of political experience made him easy to manipulate by the seasoned political pros who surrounded him.

“Colonel” Edward M. House, a well-connected associate of the Rothschild international banking dynasty was handpicked as an informal advisor to President Wilson. The Rothschilds were working hard behind the scenes to foment a global war so their banks could fund the massive costs of military conflict. Colonel House was their man in the White House to “nudge” the new President in the right direction. In the fall of 1914 WWI erupted with the assignation of Archduke Franz Ferdinand and his wife in Sarajevo, Bosnia.

France, Britain and Russia faced off against Germany and her allies Austria-Hungary, the Ottoman Empire (modern day Turkey), and Bulgaria.

But the United States had no compelling reason to join the fray and the vast majority of the nation wanted nothing to do with the war.

Indeed, Wilson ran for his second Presidential term in 1916 under the slogan, “He kept us out of war!” Colonel House used Wilson’s grandiose ego by persuading him that he could go down in history as the man who ended world wars forever with a League of Nations, today’s modern day United Nations.

There was only one major problem. Wilson would have no credibility with the combatants to pitch his League of Nation’s idea unless America shared in the bloody conflict. And to accomplish that trick House hatched a plan to turn the hearts and minds of ordinary US citizens into clamoring for war!

This was accomplished with a brazen propaganda campaign of “fake news” that painted Germany and her allies as heartless monsters that threatened the globe.

Great Britain used a naval blockade in an attempt to starve the German people into submission. Germany responded with unrestricted submarine warfare sinking any ship the German Navy suspected of aiding the British.

Several US ships (suspected of secretly transporting war materials to Great Britain) were torpedoed by German U Boats. On April 2nd, 1917 President Wilson asked Congress to declare war on Germany and her allies and four days later Congress did so.

On April 13th, 1917 President Wilson created the Committee on Public Information (CPI) an independent government agency through Executive Order #2594. Wilson appointed George Creel, a journalist, to head up the agency.

They recruited approximately 75,000 volunteers to spread carefully crafted messages deemed crucial to molding the hearts and minds of American citizens to support the war.

The committee used newsprint, posters, radio, telegraph and movies to broadcast its message. The volunteer speakers were dubbed “Four Minute Men” because that’s how long it took to change a reel of film at a movie theatre.

In between reels they would jump up and recite their carefully rehearsed propaganda to sway the crowd for war. They spoke in Churches, arena’s, concert halls and even on street corners in cities and towns large and small.

According to historians the CPI’s grip on war news was ironclad as they recounted the average citizen’s experience.

“Every item of war news they saw — in the country weekly, in magazines, or in the city daily picked up occasionally in the general store — was not merely officially approved information but precisely the same kind that millions of their fellow citizens were getting at the same moment.

“Every war story had been censored somewhere along the line — at the source, in transit, or in the newspaper offices in accordance with ‘voluntary’ rules established by the CPI.”

And while the CPI was officially disbanded on August 21st, 1919 their influence is still felt today. Overall the CPI was considered a glorious success and paved the way for today’s 24/7 news cycles that promote endless wars.

A report published in 1940 by the Council on Foreign Relations credits the Committee with creating:

“… the most efficient engine of war propaganda which the world had ever seen, producing a ‘revolutionary change’ in public attitude toward US participation in WWI.”

Fake news is nothing new, but its bloody legacy continues to mold the hearts and minds of unsuspecting, unthinking US citizens today.