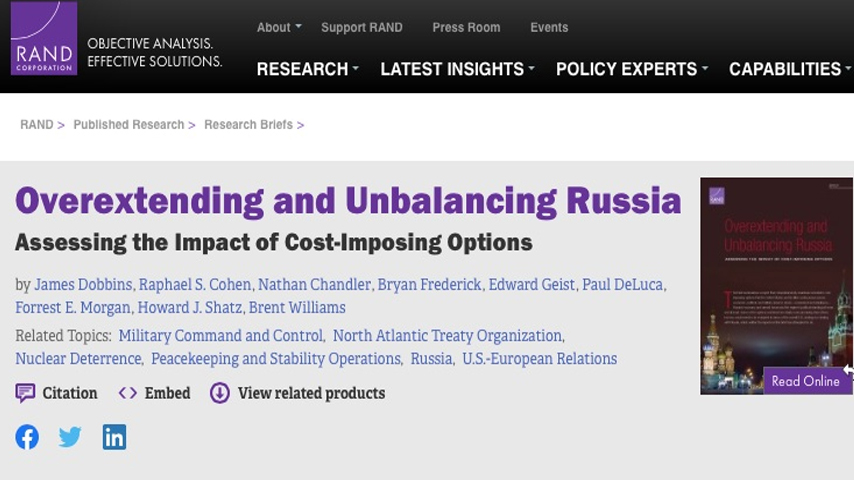 Force the adversary to expand recklessly in order to unbalance him, and then destroy him. This is not the description of a judo hold, but a plan against Russia elaborated by the Rand Corporation, the most influential think tank in the USA. With a staff of thousands of experts, Rand presents itself as the world’s most reliable source for Intelligence and political analysis for the leaders of the United States and their allies.

The Rand Corp prides itself on having contributed to the elaboration of the long-term strategy which enabled the United States to win the Cold War, by forcing the Soviet Union to consume its own economic resources in the strategic confrontation.

It is this model which was the inspiration for the new plan, Overextending and Unbalancing Russia, published by Rand [1].

According to their analysts, Russia remains a powerful adversary for the United States in certain fundamental sectors. To handle this opposition, the USA and their allies will have to pursue a joint long-term strategy that exploits Russia’s vulnerabilities. So Rand analyses the various means with which to unbalance Russia, indicating for each the probabilities of success, the benefits, the cost, and the risks for the USA.

Rand analysts estimate that Russia’s greatest vulnerability is that of its economy, due to its heavy dependency on oil and gas exports. The income from these exports can be reduced by strengthening sanctions and increasing the energy exports of the United States. The goal is to oblige Europe to diminish its importation of Russian natural gas and replace it with liquefied natural gas transported by sea from other countries.

Another way of destabilizing the Russian economy, in the long run, is to encourage the emigration of qualified personnel, particularly young Russians with a high level of education.

In the ideological and information sectors, it would be necessary to encourage internal contestation and at the same time, to undermine Russia’s image on the exterior, by excluding it from international forums and boycotting the international sporting events that it organizes.

In the geopolitical sector, arming Ukraine would enable the USA to exploit the central point of Russia’s exterior vulnerability, but this would have to be carefully calculated in order to hold Russia under pressure without slipping into a major conflict, which it would win.

In the military sector, the USA could enjoy high benefits, with low costs and risks, by increasing the number of land-based troops from the NATO countries working in an anti-Russian function.

The USA can enjoy high probabilities of success and high benefits, with moderate risks, especially by investing mainly in strategic bombers and long-range attack missiles directed against Russia.

Leaving the INF Treaty and deploying in Europe new intermediate-range nuclear missiles pointed at Russia would lead to high probabilities of success, but would also present high risks.

By calibrating each option to gain the desired effect – conclude the Rand analysts – Russia would end up paying the hardest price in a confrontation, but the USA would also have to invest huge resources, which would therefore no longer be available for other objectives. This is also a prior warning of a coming major increase in USA/NATO military spending, to the disadvantage of social budgets.

This is the future that is planned out for us by the Rand Corporation, the most influential think tank of the Deep State – in other words, the underground center of real power gripped by the economic, financial, and military oligarchies – which determines the strategic choices not only of the USA but all of the Western world.

The “options” set out by the plan are in reality no more than variants of the same war strategy, of which the price in sacrifices and risks is paid by us all.

This article was originally published on Il Manifesto. Translated by Pete Kimberley.

Manlio Dinucci is a Research Associate of the Centre for Research on Globalization.

How Many More Red Lines Can Be Crossed Before Armageddon Arrives?