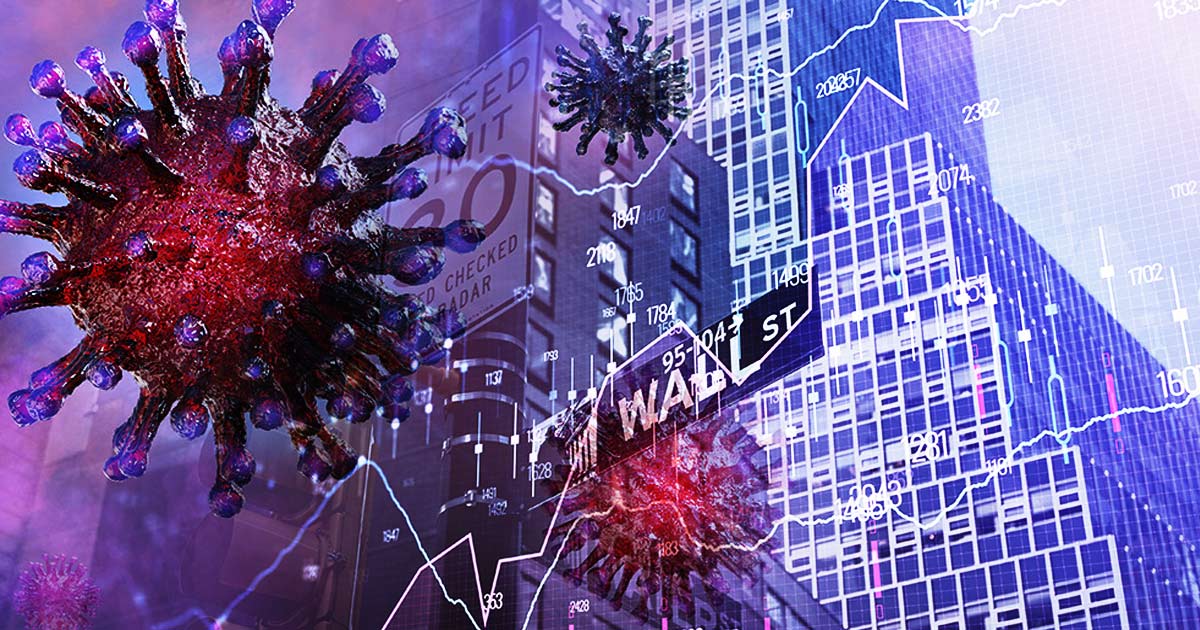 What follows is one of the best-written descriptions of where this coronavirus pandemic will likely take us in the USA. Hint: It’s worse than anything I’ve reported.

For a while now I have been hearing it said that Americans are “in a panic” over the coronavirus outbreak in the US, and that mainstream media outlets are “feeding the fear”.  This is an odd conclusion to come to and something worth noting, because the truth is mostly the opposite.  For the past couple of months the WHO, the CDC and even Donald Trump have been dismissing Covid 19 as nothing much to worry about.  The WHO actually still refuses to call it a pandemic even though the virus meets all of their own criteria.

Until recently the mainstream media was also been pumping out article after article on why Covid 19 is “no more dangerous than the flu”.  With the official death rate at 2.3% to 3% (changing by the week), the virus already has higher mortality than the average flu.  If we take into account the fact that multiple medical professionals within China have revealed (despite threats of punishment) that the Chinese government is hiding the true (and much higher) death and infection statistics, then the official data goes out the window.  We can’t even trust the infection numbers from the CDC in the US, because they been refusing to test most people unless they have recently traveled to China.

Because of government lies we have to assume that the crisis is more pervasive than we know.  And so far the average American is oblivious to it.

While we do see a handful of videos of crowds stockpiling supplies at Costco or Walmart, there simply is not enough of them.  Frankly, I would prefer to see a nationwide rush to stock up on necessities; at least then we would know that a large number of people will not starve immediately following a supply chain disruption.  The more people that have supplies, the less desperation and potential crime there will be.

Only in the past week have the media and certain government representatives suddenly decided to take the pandemic issue seriously.  Why wait until there are large community outbreaks in South Korea, Iran and Italy before instituting some travel guidelines?   Why are flights still moving back and forth from these places to the US?  Why is Trump’s economic adviser Larry Kudlow telling the country that the pandemic “is contained” and there’s no threat to the economy?  Why is the Surgeon General of the US telling people to ‘Stop buying N95 masks’ because they will not work for you; they only work for medical and CDC professionals?  This is warped fuzzy logic, and it’s bizarre.

I believe this behavior is quite deliberate, and that for the past two months there has been a conspiracy to downplay the danger and keep as many people as possible passive and unprepared.  Governments and the media have changed their tune in the past week because the threat can no longer be hidden.  The outbreak is here, as we have seen in Washington State where nine people have died already.

So, now that there is no longer any question that the US will experience outbreak conditions, we have to ask how this will play out over the coming months because this will determine how we prepare and what problems we will face.  This is how I see the pandemic escalating in 2020…

Multiple Community Outbreaks In The US

Get ready for Washington State to become a large community infection event involving thousands of people.  The virus’ incubation period of up to 24 days while a person is still contagious makes isolation and quarantine impossible.  What is happening in Washington State will happen in other states.

Going by the speed of the outbreaks in Italy and South Korea, it is likely that two weeks from now the American public will finally realize how bad the situation actually is.  The government at this stage will demand “voluntary quarantine” of individuals who think they might have the virus.  Testing will finally increase, though hospitals will have to test each person 2-3 times to get accurate results.  Expect a lot of false negatives that end up ultimately as positives for the infection.

The government, while admitting that the virus is spreading, will continue to downplay the threat to keep people as apathetic as they can.  The authorities will clam that this was done “for the greater good” in order to avoid mass panic, but they don’t care about preventing “panic”, they care about control.  The more desperate people are in the aftermath of a crisis the more likely they are to trade their freedoms for some semblance of security.

Within the next two months we will probably see at least a handful of government enforced quarantines.  Watch for checkpoints going up on main roads and highways testing for fever and symptoms, and if you live in a high population area it may be time to get out.  The biggest threat may not be the virus but the subsequent economic crash as supply lines are cut off.  I find most people are more driven by conscience than we often see displayed in movies and TV shows, but without organization and a move to become self sustainable, some people will inevitably turn to violence to get what they need.

In the span of perhaps three months, the majority of airline flights out of the US will stop.  All interstate travel will be restricted.  If you need to go somewhere other than where you currently live, now would be the opportunity to do it.

There will be hundreds of announcements by government officials and the media hinting that a vaccine is “right around the corner”.  Don’t believe it.  On average a vaccine takes 1 year to develop at minimum.  That is the fastest it could be accomplished an this is under the best possible circumstances.  Also, keep in mind that Covid-19 has many similarities to SARS, and the last time they tried to develop a vaccine for SARS it caused an “immunopathologic lung reaction” in test animals, meaning a negative reaction that can cause death.  They also found the vaccine caused liver damage through hepatitis.  I would not trust any vaccine or drug cocktail coming from the CDC and FEMA, especially if it is fast-tracked into existence.

The only purpose to constantly injecting vaccine promises into the public consciousness would be to give people false hope and to make them docile as they sit inactive waiting for the authorities to save the day; as well as to keep stock markets from plunging too fast.  The bottom line is, a vaccine can take up to ten years to produce, one year if there is a massive effort and mountains of money invested.  There will be no legitimate vaccine in 2020.

Donald Trump’s behavior surrounding this event might seem strange to many people as he continues to dismiss virus concerns, shows more interest in the stock market than the health crisis and talks about a vaccine that will not be coming anytime soon.

As I have noted in numerous articles, Trump is a puppet of the globalists and has been for decades.  His relationship with the Rothschild banking family goes back to the 1990’s when he was bailed out of his debts in numerous properties in Atlantic City.  Rothschild banker Wilber Ross arranged the deal and now Ross is Trump’s Commerce Secretary.  The number of CFR members and elites within Trump’s cabinet indicates he is at the very least an unwilling participant, if not completely complicit in the agenda.

Trump’s behavior makes sense when this fact is taken into account.  Trump’s role is to become a pied piper for conservatives, and as he leads the US into disaster his job is to act as a bumbling villain.  As Trump’s image goes down he is meant to drag all conservatives and conservative principles of sovereignty and limited government down with him.

As part of this narrative I do see a chance that Trump will announce “delays” on the 2020 election in November.  Do not be surprised if the election is canceled entirely.  This would enrage leftists and accusations of dictatorship would be made against Trump.  The question is, will a large number of conservatives support the action?  Remember, elections are irrelevant; both sides are controlled, but why not use them instigate a civil war within the US on top of the pandemic crisis?

Liberty websites like mine and many others will eventually be shut down or blocked from public view by the government.  They will claim that we are “spreading panic” or “fake news” and “putting the public at risk”.  This is what is happening in China and it could just as easily happen here.  They will assert that the ONLY authority on the pandemic is the government, and alternative sources cannot be allowed to exist.  Anyone that questions the narrative that centralization is the solution will be targeted.

I expect this kind of lockdown of the web closer to election season and the end of the year if the current virus trend continues.  Mainstream media and spin control websites will remain intact.  Their job will be to flood the public with false news stories and maintain government dominance of the narrative.

At this point the only way to get legitimate information to the average person would be Ham radio networks, which the FCC will attempt to interfere with also (though this would be very difficult).

The Extent Of The Crash

An economic crash is built into this event.  There is no way around it, and I am not simply talking about stock markets, which are a meaningless trailing indicator.  With supply chain and labor disruptions central banks can do nothing to intervene, and stimulus measures would be pointless except as a placebo for the masses.  But how bad will it actually get?

I am doubtful of total breakdown of government unless there is a larger scale rebellion against martial law measures.  The system will remain somewhat functional, but constantly inadequate to help the public.  The system’s only purpose will be to keep people inactive and in check as their prospects turn worse and worse.  Agencies like FEMA and the CDC will attempt to herd the public into “treatment centers” and camps in the worst hit areas.  Gun confiscation on the grounds of “national emergency” provisions will eventually be suggested as some people will resist.  If you and your community have had success in self quarantine do not expect to be left alone.  In fact, expect interference that will put you and your community at risk.

Finally, a “solution” will be presented to the world by global institutions like the WHO and the IMF.  As the globalists suggested in their “Event 201” pandemic exercise which simulated a coronavirus outbreak killing 65 million people and was staged TWO MONTHS before the real pandemic started, the great fix will be to form a global financial authority to manage the response.  And thus we see the beginning of global governance…

The Danger We Face – An Extreme View

Why The Public Should Rebel Against Forced Vaccinations