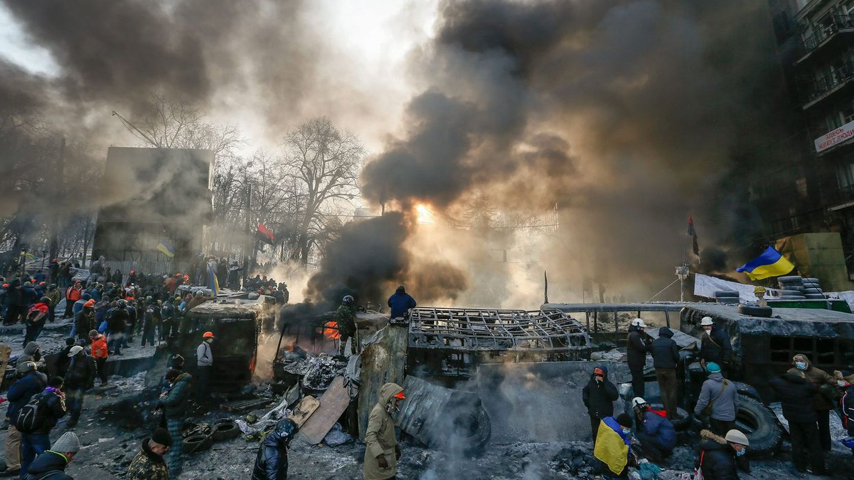 The Organization for Security and Co-operation in Europe published on April 15, 2016, more than six years ago, a report on the torture of Donbass Russians by the Ukrainian military and police forces.  The report documents horrendous torture and it was done out of racial hatred of Russians. You can read the report here:  https://www.osce.org/files/f/documents/e/7/233896.pdf

Few Westerners, being so poorly educated, are aware that Western Ukraine fought for Nazi Germany during World War II.  When Washington overthrew the Ukrainian government in 2014, Washington installed a Nazi government. The Nazi government in Ukraine shelled the Russian residents of the two break-away Donbass republics for 8 years while Washington and NATO trained and equipped a Ukrainian army to retake the breakaway republics.

The Donbass region, always a part of Russia, was put into the Ukrainian province of the Soviet Union by the Soviet government for administrative or other reasons, as was Crimea by Khrushchev in the 1950s.  When the US overthrew the Ukrainian government and installed an anti-Russian government, the residents of Crimea and Donbass, being Russians, broke away and voted overwhelmingly to be reunited with Russia.  The Kremlin accepted Crimea but made the strategic blunder of rejecting Donbass, thus resulting in the extreme murder and torture of Donbass Russians for 8 years before the Kremlin was forced to intervene by Russian public opinion and by the appearance of a 150,000 American-trained Ukrainian army and Nazi militias on the Donbass border.  It is this army and Nazi militias that the Russian army has been exterminating in Donbass during the last several months.  The Western media reports of Ukrainian victories show the total absence of integrity and respect for truth that damns Western journalism.

The extreme torture of the Russian residents of Donbass has been supported by three US presidents, all European states, and the entirety of the whore Western media, a collection of despicable scum.

Instead of reporting the truth, the scum Western media reported fake news of rapes and looting by Russian soldiers, the most disciplined army in the world.  The Ukrainians, or perhaps the CIA, have been exposed filming fake battle scenes in which allegedly Russian troops are shown fleeing from combat.  The filming is so sloppy that the director’s instructions for the staged act are included and the film crew is itself filmed, indicating that it is a film production and that there is no danger in the situation.

As horrendous as it is that the “free West” underwrites and diplomatically supports the torture of Russians by Ukrainians while the despicable Western media covers it up, this horror pales in significance compared to the extraordinary decision of the White House Idiot to place in Ukraine’s hands missiles capable of hitting targets in Crimea, the traditional home of Russia’s Black Sea naval base.

Washington has said that Washington won’t be operating the missiles and is relying on Ukraine’s assurance that they won’t be used to attack Russian territory.  But Ukraine doesn’t regard Crimea as Russian territory. Neither does Washington’s “world community.” The “world community” doesn’t acknowledge the Crimean vote for reunification with Russia.  Officially for the West, Crimea is part of Ukraine.  So Ukraine can use Biden’s missiles to attack the Russian naval base in Crimea.

As Eric Zuesse, an unusual leftwinger who generally respects the truth as far as he can see it, something the left seldom does, notes, the Biden Idiot and his neoconservative controllers have turned over to Zelensky, a Jew allied with Nazis, the decision whether there will be Armageddon.

Here is Zuesse, speaking for himself:

Ukraine Says It Might Use U.S. Weapons to Invade Russia

In order to understand this matter, some fundamental background must first be briefly presented; and it is this (the remainder of this paragraph): Ukraine’s Government has consistently promised that it will retake Crimea, which had been part of Russia during 1783-1954 when the Soviet leader Khrushchev then transferred it to Ukraine, and which subsequently broke away from Ukraine in 2014 to rejoin Russia. Russia has re-established its sovereignty there, after a 2014 referendum in Crimea showed over 90% support by voters for Russia to do so. That’s the background.

On June 1st, when the White House announced that it would be sending to Ukraine weapons that might be used for invading Russia, Jonathan Finer, deputy White House national security adviser, said Washington had asked Ukraine for assurances the missiles would not strike inside Russia. On June 3rd, Ukraine’s Government rejected that request.

At the time when Biden made that announcement on June 1st, Reuters noted that “Biden announced the plan to give Ukraine precision HIMARS rocket systems after receiving assurances from Kyiv that it would not use them to hit targets inside Russian territory.”

If Ukraine did not give Biden such “assurances,” then Biden was lying.

If Ukraine was lying on June 3rd to say that it won’t comply with Biden’s request, then that was a lie from Ukraine.

Here is the way Russia’s RT News reported, on June 3rd, Ukraine’s rejection of Biden’s request (assuming that Biden did make such a request; wasn’t lying about that):

“Ukraine dismisses its promise to the US”

Kiev may strike Crimea, a Ukrainian presidential aide says, despite assurances US weapons won’t be used to hit Russian territory.

Ukraine will use US-supplied rocket systems to strike into Russian territory should it deem such attacks necessary, Ukrainian Presidential Adviser Alexey Arestovich said on Thursday. …

“Crimea is ours. It belongs to Ukraine. And they [Russia] know it.” …

Arestovich’s comment comes despite US Secretary of State Antony Blinken saying on Wednesday that Kiev has given Washington “assurances” that it won’t use American rockets to attack targets in Russia. …

Arestovich’s statement echoes the claim made by another Ukrainian politician. Egor Chernev, a Ukrainian MP, said on Wednesday that Russian aircraft and military stationed on Russia’s territory are “legitimate targets.”

If Ukraine uses U.S. weapons to invade Russia, then under existing international law, the U.S. will be a participant in that invasion. Russia would have a good case that (given the facts which have just been documented here), that participation would be either intentional or else negligent. It would not have been unintentional on America’s part. Russia would, at the very least, then ask America whether that participation was intentional, or instead negligent. If America says “negligent,” then Russia would ask what America will do to rectify that matter. If America instead says “intentional,” then there will exist, from that moment on, a hot war between Russia and America. The loser in any hot war between Russia and America will escalate the conflict to a nuclear war in order to avoid becoming conquered by the other side. That would be not only WW III but a nuclear WW III, and would destroy all of the allies of each side, and would severely contaminate even neutral countries, and end globally in a nuclear winter, which would possibly end all life as it has existed on this planet.

I have said from the beginning that the Kremlin is reactive, not proactive, and only slowly reactive.  The consequence is that the Kremlin’s red lines mean nothing to the West.  Even when under extreme duress, the Kremlin only allowed itself a limited military intervention in eastern Ukraine where residents are ethnic Russian.  To the neoconservatives controlling Western foreign policy,  this appears as irresolution, so the West presses on.  Red line after Red line is crossed, and the Kremlin does nothing.  It took EIGHT YEARS for the Kremlin to react to the slaughter of Donbass Russians, and only did so after the West laughed at the Kremlin’s security concerns and dismissed them out of hand.   Russia’s conduct of its foreign policy shows irresolution, and this invites more provocations. The Kremlin shows an inability to comprehend the dilemma it creates for itself.

Do we assume that years of Kremlin subservience to the West under Yeltsin and years of Kremlin hesitation under Putin have convinced the West that there is no strength in Russia and that Washington can press on with the Wolfowitz Doctrine of Washington’s hegemony?  Perhaps this is a safe assumption.  After all, Washington had three decades of Kremlin toleration of Washington-financed NGOs, media and subversive organizations operating inside Russia corrupting the youth and the disaffected.  Elements of this ilk are even present in the Russian government.

In the West, the Russian military is a laughing stock.  The media reports that Russian forces are about to be rolled up by democratic Ukrainians using American weapons. The unreality of this fantasy means more red lines will be crossed.

Are the Atlanticist Integrationists going to depose Putin?  Is Russia going to have a new leader installed who will apologize to Ukraine and pay reparations?

If not, what’s going to happen when those US missiles given to Ukraine hit targets in Crimea?

Putin’s humanity, his toleration of provocations, his reluctance to use force have encouraged the West to press harder. Sooner or later a red line is going to be crossed from which there is no recovery.

These statements from Russian leaders indicate that the Idiot West has pushed beyond the fatal Red Line:

In a TV interview with Al Jazeera Television, Dmitry Medvedev, deputy chairman of the Security Council of Russia, said “This is not a forecast, but what’s already in play.  The Horsemen of the Apocalypse are galloping ahead, and we can only look towards God.”

On Russian television, there is constant discussion about how the conflict in Ukraine is really a proxy war between the United States and Russia.

On the state TV show 60 Minutes, host Olga Skabeeva announced: “I have some unpleasant news… Even though we are methodically destroying the weapons that are being delivered [to Ukraine], but the quantities in which the United States are sending them to force us to come up with some global conclusions. Perhaps it’s time to acknowledge that maybe Russia’s special operation in Ukraine has come to an end, in a sense that a real war has started: WWIII. We’re forced to conduct the demilitarization not only of Ukraine but of the entire NATO alliance.”

Vladimir Avatkov, from the Diplomatic Academy of the Ministry of Foreign Affairs, said: “You mentioned WWIII and the way Americans and Poles are acting on the territory of Ukraine—indeed, we need to remember the words of Vladimir Vladimirovich Putin, who said that anyone who tries to interfere in the special military operation will pay a heavy price.” Skabeeva interrupted: “We never forget about these words of Vladimir Vladimirovich Putin, but a great number of people are already standing in line, trying to interfere in Russia’s special operation on the territory of Ukraine. Turns out, we have to act—but we’re yet to figure out how we can act without conducting a nuclear strike.”

Just the other day, one prominent Russian politician openly talked about destroying both coasts of the United States with Sarmat intercontinental ballistic missiles…

The politician, Alexie Zhuravlev, was joined on the talk show by fellow MP and Russian-state mouthpiece Yevgeny Popov, the host of the Rossiya 1 channel show.

The lawmaker claimed that two of Russia’s Sarmat missiles would destroy the entirety of America’s east coast – before adding it would take just “two missiles for the west coast” as well.

“Four missiles and there’ll be nothing left.”

The Final Countdown To The Psalm 83 War, Jeremiah 49 And Isaiah 17 The Destruction Of Damascus!