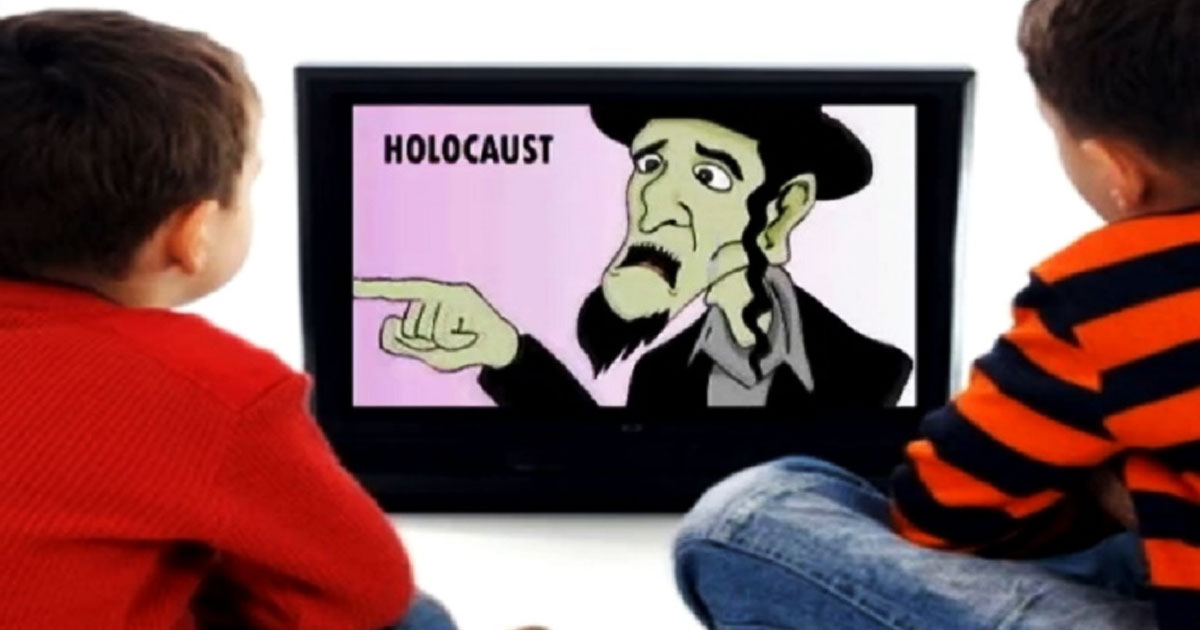 Back in 2016, I was sitting in a Toronto coffee shop frequented by Jews and overheard a woman lecturing a toddler on the subject of Clinton- Good; Trump- bad.”  I don’t know of another people sobrainwashed as my own.

Cabalist Judaism is a satanic cult like its spawn Freemasonry. Only the initiated know the real agenda. The rank and file is deceived.

Antisemitism would end if more Jews acknowledged that many Jews (and Freemasons) are pawns used to install the hellish NWO. Pawns get sacrificed.

The covid hoax is perpetrated by the Cabalist (Masonic) Jewish-controlled banking system, mass media and politicians. They are the real virus.

The Power of Deception is being applied to humanity.  In this sense, we’re all becoming Jews, inductees into the Cabalist cult as cannon fodder.

Jewish children are taught that Jews are hated for no reason, due to no wrong-doing or fault.

They are taught that antisemitism is an irrational gentile trait. Explanations for this bizarre gentile behavior include envy, scapegoating, or the Crucifixion of Christ.

The Jewish child naturally grows up feeling that he is an outsider and society is flawed. An idealist, he wants to “change the world” so this type of injustice cannot occur. Thus unwittingly he becomes a pliant instrument of the Jewish power elite’s “revolutionary” or globalist agenda.

Apologists serving this elite continue to mislead Jews. Take this recent article by Dennis Prager for example. Entitled “Blame the Jews?” it begins “No group in the world has been the target of nearly as many twisted and ludicrous accusations.”

A Jewish reader sent it to me. See, we really are persecuted, she wanted to say.

Prager, co-author of Why the Jews? The Reason for Anti Semitism (2003) addresses the notion, advanced by Pat Buchanan and others, that Jews were responsible for the Iraq War. He compares this to other fantastic libels like the Jews started the Great Plague or made blood sacrifices of gentile children.

“Many groups have been hated in history, but their haters never made up as many lies, let alone such grandiose lies, as have Jews’ enemies,” Prager writes.

“It is worth analyzing this latest libel, if only to understand anti-Semitism and the enormous role it plays in the world.”

Prager points to the fact that there is “not a single Jew” in the Bush cabinet. He asks why do “some people see Jews behind a war initiated by non-Jews?”

Wolfowitz was featured Dec. 21 in TIME magazine in a story entitled “Godfather of the Iraq War.” 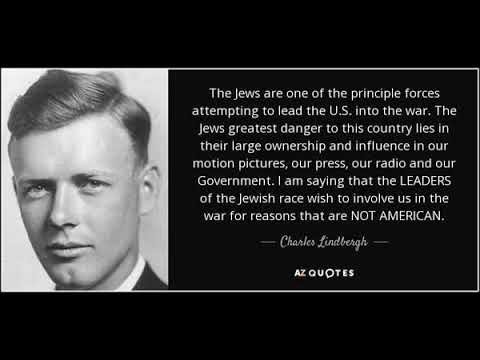 “In the course of the past year, a new belief has emerged in [Washington]: the belief in war against Iraq. That ardent faith was disseminated by a small group of 25 or 30 neoconservatives, almost all of them Jewish, almost all of them intellectuals (a partial list: Richard Perle, Paul Wolfowitz, Douglas Feith, William Kristol, Eliot Abrams, Charles Krauthammer), people who are mutual friends and cultivate one another and are convinced that political ideas are a major driving force of history.”

William Kristol has said this group is largely responsible for the war.

My point here is that Jewish propagandists like Dennis Prager mislead Jews. As long as they think they’re disliked for no reason, Jews can be manipulated. Their actions create more anti-Semitism, and the vicious cycle continues.

Some “anti-Semitic” accusations indeed reflect the secret activities of Jewish power brokers. A glaring example came to my attention this week.

I used to be a Zionist. (I still believe Israel should keep its 1967 boundaries and the Palestinians compensated generously.)

I always believed the Jewish version of events in 1948. The story goes like this. After the UN partitioned the Holy Land, Arabs nations ganged up to drive the Jews into the sea. In advance of this murderous assault, the Arabs asked their compatriots to leave for their safety. Seven hundred thousand Palestinians left of their own free will. Yes there was an isolated massacre, Dier Yassin but this was the rogue action of the Irgun terrorists.

I considered immigrating to Israel in 1971 and it never occurred to me to question the ownership of this land. I would sit in former Arab homes and think, “Gee, this is so quaint.”

Now after 56 years the truth emerges. The Israelis were waiting for an opportunity to expand beyond the partition borders. The Palestinians did not flee but were driven out. There was not one but 24 massacres. “Transfer” or “Ethnic Cleansing” was (Israeli PM) David Ben Gurion’s unwritten policy.

An Israeli historian Benny Morris has access to IDF archives and the integrity to speak. In a January 8 interview in Haaretz, Morris says:

“Twenty-four [massacres]. In some cases four or five people were executed, in others the numbers were 70, 80, 100. There was also a great deal of arbitrary killing. Two old men are spotted walking in a field – they are shot. A woman is found in an abandoned village – she is shot. There are cases such as the village of Dawayima [in the Hebron region], in which a column entered the village with all guns blazing and killed anything that moved. 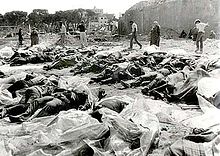 “The worst cases were Saliha (70-80 killed), Deir Yassin (100-110), Lod (250), Dawayima (hundreds) and perhaps Abu Shusha (70). There is no unequivocal proof of a large-scale massacre at Tantura, but war crimes were perpetrated there. At Jaffa there was a massacre about which nothing had been known until now. The same at Arab al Muwassi, in the north. About half of the acts of massacre were part of Operation Hiram [in the north, in October 1948]: at Safsaf, Saliha, Jish, Eilaboun, Arab al Muwasi, Deir al Asad, Majdal Krum, Sasa. In Operation Hiram there was a unusually high concentration of executions of people against a wall or next to a well in an orderly fashion.

“That can’t be chance. It’s a pattern. Apparently, various officers who took part in the operation understood that the expulsion order they received permitted them to do these deeds in order to encourage the population to take to the roads. The fact is that no one was punished for these acts of murder. Ben-Gurion silenced the matter. He covered up for the officers who did the massacres.”

As with the treatment of American Indians, Israel’s foundation involved inexcusable acts. My point is that most Jews believe the lies they are told. The Arabs’ accusations were dismissed as “anti-Semitism.”

I am not an expert on anti-Semitism but I suspect many accusations have a sound basis. They reflect the fact that the Jewish Illuminati, specifically the international bankers and their many non-Jewish allies are imposing their control over the world, using the United Nations as a front.

Called globalism, this long-term agenda involves an assault on God, nation, democracy, race and family, the effect of which should be obvious. The aim is to replace the Christian foundations of Western civilization with a bizarre and dysfunctional Luciferian dogma. The human race has been hijacked with the goal of enslaving it.

The Illuminati operate under many guises including “world revolution” (Communism, feminism, liberalism, socialism), Zionism, neo conservatism, and secret societies like Freemasonry and George W. Bush’s “Skull and Bones.” The CIA, Mossad, foundations, think tanks, the Council on Foreign Relations, and the mass media are among its instruments.

Jews play a disproportionate role in advancing the Illuminati agenda. Many think they are creating a secular humanist utopia where “anti- Semitism” cannot exist. Others just want to get ahead. The Illuminati hides behind them, and disarms opposition by calling it “anti-Semitism.”

The Iraq War and the “War on terror” are part of this plan. The Illuminati is responsible for Sept. 11, which Bush refuses to investigate. They manipulate everybody with lies, not only Jews.

Everyone is used. The Holocaust may have been the best “use” of millions of Jews like my grandparents who perished. I fear they may have been sacrificed for the creation of Israel and the New World Order. I don’t want that to happen to anyone again.

The Great Reset Will Render All Products As Services, To Implement ‘You Will Own Nothing’ By 2030