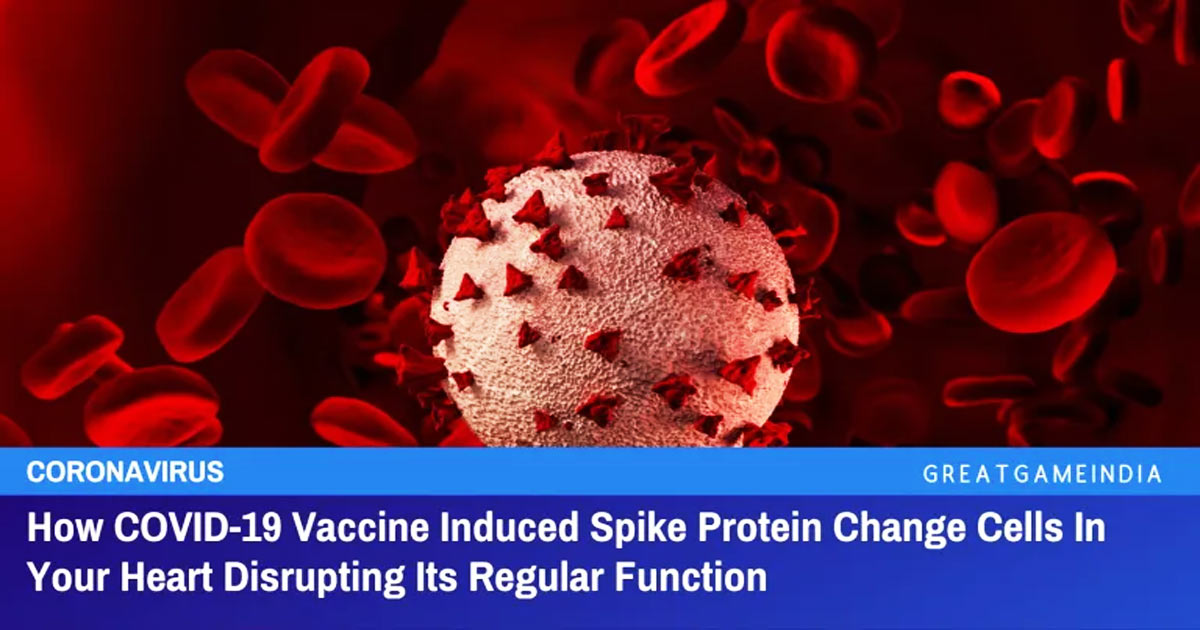 According to a new study, the COVID-19 vaccine-induced spike protein could change cells in your heart disrupting its regular function.

Researchers have found a concerning link between certain heart cells and the spike protein of SARS-CoV-2, the virus that causes COVID-19. The mRNA vaccines tell our cells to create similar spike proteins found on the surface of the SARS-COV-2 virus.

This spike protein appears to change cells in the small blood vessels around the heart, disrupting their regular function.

The pre-print study(read below), was presented at the European Society of Cardiology Congress and shows that the spike protein binds to cells called pericytes.

These cells line the small vessels of the heart as well as other places around the human body. When the binding occurs, the pericytes begin to release chemicals that cause inflammation to the organ.

In the study, the team took small vessel cells from the heart and exposed them to the spike protein. The protein is used by the virus to attach itself to the cells.

Once the virus’s position is secured, the virus merges with the cell membrane, releasing its genetic material. This highjacks the cellular machinery, which begins replicating the virus, which then bursts out and spreads to other cells.

“This mechanism has the potential to spread cellular and organ injury beyond the infection sites and may have important clinical implications.

For instance, in patients with disrupted endothelial barrier and increased vascular permeability due to underlying diseases, such as hypertension, diabetes, and severe obesity, S protein molecules could easily spread to the PC compartment and cause, or exacerbate, microvascular injury,” the authors wrote in the paper.

“Blocking the CD147 receptor may help protect the vasculature of the most vulnerable patients from infection and the collateral damage caused by the S protein.”

If the spike protein alone is capable of affecting cells’ behavior, it’s concerning. It suggests that even cells that are not being infected can be harmed by the vaccine-induced spike proteins.

The team found that by blocking the CD147 receptor on those cells, they reduce the effect of the spike protein on the pericytes, although there was still inflammation.

Pericytes are found all over the body, including the brain and central nervous system. If the mechanism can be stopped in patients it might reduce the complication and further investigations might produce better ways to stop the spike protein.

The spike protein outer shell of the coronavirus contains “prion-like regions” that give the virus very high adhesion to ACE2 receptors in the human body.

This special relationship between the S protein and ACE2 receptor is the key to cross-species infection which made it possible for the coronavirus to make a jump from animals to humans.

However, this cross-species jump was not natural and was achieved by the team lead by the Batwoman of China, Shi Zhengli. You can read more about it in detail in COVID19 Files – Scientific Investigation On Mysterious Origin Of Coronavirus.

It was funded under gain-of-function experiments through Peter Daszak, the President of EcoHealth Alliance by the US Government.

Recently, more than 900 pages of newly released top secret documents on the pandemic were exposed for the first time through official materials on how the US-funded deadly coronavirus research at the Wuhan lab through EcoHealth Alliance.