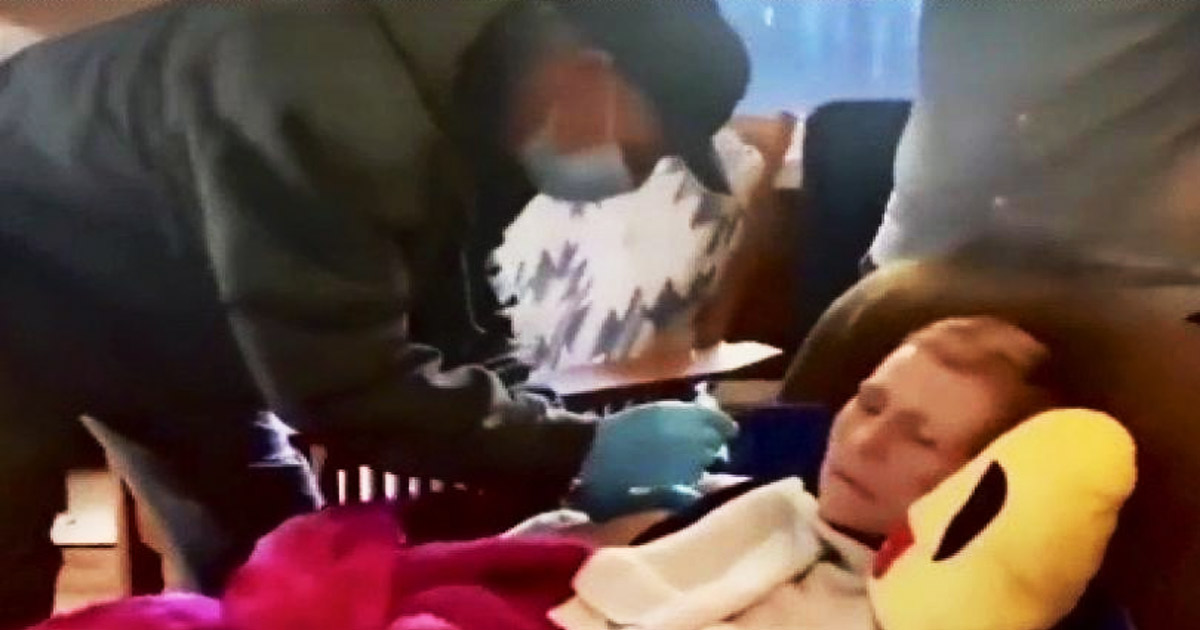 The LASD launched “Operation Homebound” – “a program to vaccinate the most underrepresented, homebound, and underserved disabled residents in our communities, including those experiencing homelessness” – in January, according to the department website.

Another clip shows a woman who is barely able to move and unable to speak being vaccinated. “It’s OK, hon. It’s OK. We just gave you a vaccination,” an officer says to the woman, who appeared to be asleep and awoke when the injection went in her arm.

“The video is horrific,” psychiatrist Peter Breggin, a champion of the right to informed consent who successfully campaigned in the 1970s against the psychiatric practice of surgical lobotomy for mental illness, told LifeSiteNews.

“It represents the worst of psychiatry, public health, and progressive politics coming all together in the service of globalism,” he said.

No one who is incapable of giving consent – which includes children, those with severe illnesses, and those in institutions including prisons, hospitals, and nursing homes – should be given a vaccine that is experimental and still undergoing clinical trials, said Breggin.

All of the vaccines in circulation to date are not approved or licensed by the Food and Drug Administration but have only been granted Emergency Use Authorization because they are experimental.

“It is a well-established constitutional right that prohibits experimentation on the mentally ill,” said Breggin, who is the author of the forthcoming book COVID-19 and the Global Predators.

Under the Sherriff’s program, approximately 500 LA residents have been vaccinated to date using the Johnson & Johnson one-shot COVID vaccine that U.S. health officials said Monday should not be used until investigations into six reported cases of severe brain blood clots after receipt of the injection are completed.

To date, 2,342 deaths have been reported to the Centers for Disease Control and Prevention’s Vaccine Adverse Event Reporting System (VAERS) in association with COVID-19 vaccines as well as 4,972 reports of hospitalizations.

Vaccinating officers who are certified paramedics and emergency medical technicians were sent out in response to requests from people with legal authority over disabled and homebound people, many of whom are unable to attend special education classes or access other community programs and services if they are not vaccinated, she added.

“We’re not running around LA county tackling people and vaccinating them. These have all been requested,” Schrader claimed.
Withholding services to the disabled is a form of coercion itself, said Breggin, who called the acts of forced vaccination “utterly humiliating” with the additional effect of “forcing everybody watching into fear and docility.”

“No one living in America today, whether in an institution or at home, is sufficiently free of coercion to voluntarily accept COVID-19 vaccines,” he added.

Schrader said that homeless people had not been vaccinated in the program, although a March 25 letter from Sherriff Alex Villanueva to the County of Los Angeles Board of Supervisors said, “We also have a plan in place to vaccinate our homeless population.”

“They give it to them because they can,” Breggin said, citing the program as a clear violation of the Nuremberg Code, a set of ethics that arose after the prosecution of Nazi criminals following the Second World War and begins with the principle of “voluntary consent” of patients being “absolutely essential.”

American history is littered with precedents of experimentation masked as “medical treatment” for the mentally ill and disabled, however. From the 1950s to 1972, disabled children at the Willowbrook State School in Staten Island, New York were subjected to vaccine experiments, for example. New York University pediatrician Saul Krugman was one of the researchers involved who deliberately infected children with viral hepatitis by feeding them an extract made from the feces of patients infected with the disease.

In another example, the government forced sterilization of those deemed mentally ill and “undesirables” continued in some states until the 1980s.

A paper on prioritization of mentally ill people for COVID-19 vaccination published in The Lancet in February said that “compulsory medical interventions” can be “traumatic” and so “should only be considered as a last resort.”

The paper said that people with severe mental illnesses such as psychosis can have underlying conditions such as obesity and Type 2 diabetes that raise their risk of mortality from COVID-19.

Breggin said such patients are doubly victimized by the system, however, because their susceptible underlying conditions are almost always caused by the psychiatric drugs they are given.

“What we do in psychiatry is we poison the patient and then we accuse them of having shortened lifespans and excessive illnesses when we’ve given them to them,” he said.