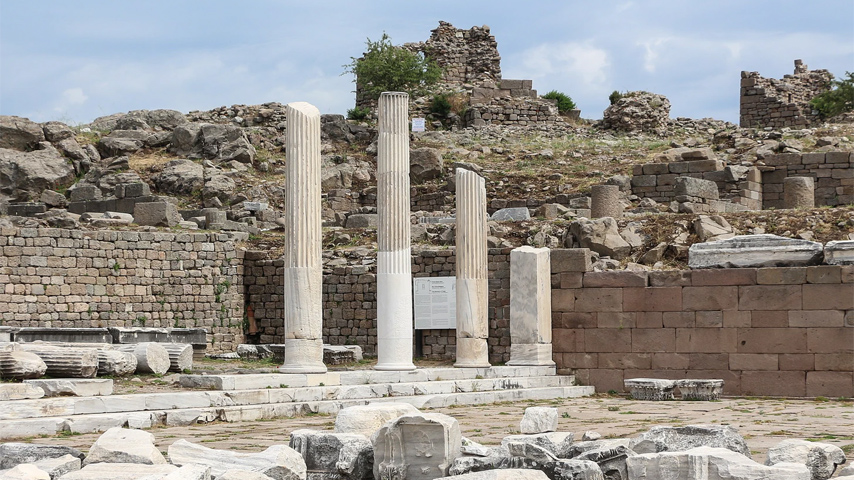 God knows where you dwell, and He is there with you

On the desolate island called Patmos, the now-elderly apostle John had just been flattened by the appearance of the Lord Jesus Christ in all His dazzling glory.

After Jesus had helped John to his feet, He gave His old disciple an assignment to write to seven churches that were active on that day. In fact, He dictated them to John right on the spot. And as we see in the second and third chapters of the book of Revelation, those letters still have a direct and powerful impact on churches and believers in 2022.

Again, these were all actual, functioning, local congregations in Ephesus, Smyrna, Thyatira, Pergamos, Sardis, Laodicea, and Philadelphia. In fact, a postal route of that day would have stopped at all seven locations. These were real churches filled with real believers facing real and daunting challenges.

In the first letter, Jesus wrote to a church that had gradually lost the fire and joy of its first love for the Lord. In the second letter, He wrote to a church battered by hammer blows of intense persecution, urging them to hang in there and remain faithful. In the third letter, He spoke to a church trying to remain loyal to Jesus in a dangerous and conflicted place. It was also a group of believers who were in great peril of infiltration by the enemy.

Here is how the Lord Jesus began that third letter, to the church of Pergamum.

“These things says He who has the sharp two-edged sword: I know your works, and where you dwell, where Satan’s throne is. And you hold fast to My name, and did not deny My faith even in the days in which Antipas was My faithful martyr, who was killed among you, where Satan dwells.”—Revelation 2:12-13

Pergamum at that time was the capital and cultural center of Asia. The city was built on a rocky hill with a view of the Mediterranean. It was renowned for its magnificent library, housing 200,000 rolls of parchment.

Many cities have iconic structure or building that immediately identifies them to the world. In San Francisco, it’s the Golden Gate Bridge. In Seattle, it’s the Space Needle. St. Louis has its giant arch, and New York City has the Statue of Liberty and the Empire State Building. In Pergamum, the image the city would have put on its website was a colossal, throne-shaped altar dedicated to Zeus. It was regarded as one of the seven wonders of the ancient world.

Other gods were worshiped in the city as well, including Dionysus and the snake-god Asclepius, also known as “the savior god.” People would come to the snake shrine from around the world to worship this god and seek healing from their illnesses. In the temple itself, non-venomous snakes would slither around the floor, and crawl over the supplicants who were lying there. If you were touched by a snake, it was believed, you might be healed from what it was that troubled you.

What a creepy place that would have been! It reminds me of something out of the old Indiana Jones movies.

Besides these, there was also a great temple erected for the worship of Caesar Augustus. Augustus means “of the gods,” and by this time the Caesars were not only accepting worship, but they also mandated it.

Light in the Darkness

Pergamum, then, was a very dark place. If you walked those streets back then, even in broad daylight, I imagine you would have felt that evil, that heavy sense of oppression. And right in the middle of it all, there was a church of Jesus Christ! A tiny island of light. A gathering place for believers of the one true God.

In Revelation 2:13, Jesus spoke of it as the place “where Satan has his throne.” In other words, the city was so much to Satan’s liking that he hung his hat there—if the devil has a hat. Another translation says it like this: “I am fully aware that you live in the city where Satan’s throne is, at the center of satanic worship.”

God is omnipresent, which means He is always everywhere at the same time. Satan, however, can only be in one place at one time. And in this particular era of history, he felt right at home in Pergamum.

Have you ever noticed how some cities seem more wicked than other cities? Have you ever been in a city or a section of a city where the spiritual “atmosphere” felt heavy or oppressive? Sadly, there are places like that in once-beautiful American cities, like Chicago, Portland, and Los Angeles.

A friend of mine told me about visiting Bucharest, Romania, shortly after the revolution that overthrew the communist dictator, Nicolae Ceaușescu. At the time of my friend’s visit, the tyrant had been executed and buried. But bullet holes still scarred many public buildings. Dread still lurked in the shadows, and fear still stalked the streets. Lying in his bed in a dark, Soviet-style apartment one night, he felt evil close in on him like a choking fog. It was all he could do to croak the name of Jesus for deliverance.

Maybe you have had the experience of driving through a certain city, and when you were finally through it, out on the open road, you breathed a sigh of relief and felt that sense of oppression slip away. Some cities have even tried to capitalize on being on the edge—or over the edge—of that kind of wickedness. Las Vegas likes to call itself “Sin City” and projects that image to the world. They spend millions promoting the slogan, “What happens in Vegas stays in Vegas.”

In other words, “Come here and do whatever evil you like, and no one will ever know.”

I’m aware that there are some vital, vibrant churches in Las Vegas, filled with Christians who love the Lord and want nothing more than to shine their light for Jesus in a dark place. It was the same in Pergamum. There were strong believers there who were clinging to the Lord and trying to serve Him in spite of all kinds of opposition. Jesus acknowledged those dedicated followers, and commended the ones who “hold fast to My name.”

“I Know Where You Live”

Are you in a spiritually dark place right now? Maybe you recently came to Christ, and you’re the only Christian in your family. Whenever the family gets together, you’re the one who catches all the flak, and it seems like everyone is against you. They may even be angry with you for going against the family identity and becoming a follower of Jesus.

Maybe you’re in a neighborhood or apartment complex surrounded by godless people. Or you might be on a “woke” high school or university campus, where you could be canceled—or worse—for taking a stand for Jesus or biblical values. Perhaps you are working in a place where your supervisors or fellow employees constantly harass you for your faith.

Know this: Jesus is fully aware of the challenges, pressures, and temptations you face at this very moment. He understands (more completely than you ever could) the “atmosphere” where you live, work, or go to school.

He knew these believers were living in a demonic hellhole, and trying to hold onto their faith. Jesus says, in effect, “Guys, I know that your city is messed up. You live under the shadow of giant idols and pagan altars. You have people worshiping snakes and rolling around on the floor with them. You’ve got people bowing down to worship Caesar, a mere man. You have temple prostitutes walking the streets, trying to entice people into their temples to do horrible things. And yet you are serving Me right in the midst of it all, in Satan’s hometown. I am aware of that. I know.”

David, the psalmist had to live in some pretty dark places when he was on the run from a bloodthirsty king. At one point, he had to set up housekeeping in the black depths of a cave. Even so, he was incredibly encouraged to remember that God knew exactly where he was—and how to care for him in that dark, lonely place. He never stopped leaning on the Lord’s presence.

I can never be lost to Your Spirit!
I can never get away from my God!

…If I try to hide in the darkness,
The night becomes light around me.

For even darkness cannot hide from God;
To you, the night shines as bright as day.

How to Live in Perilous Days