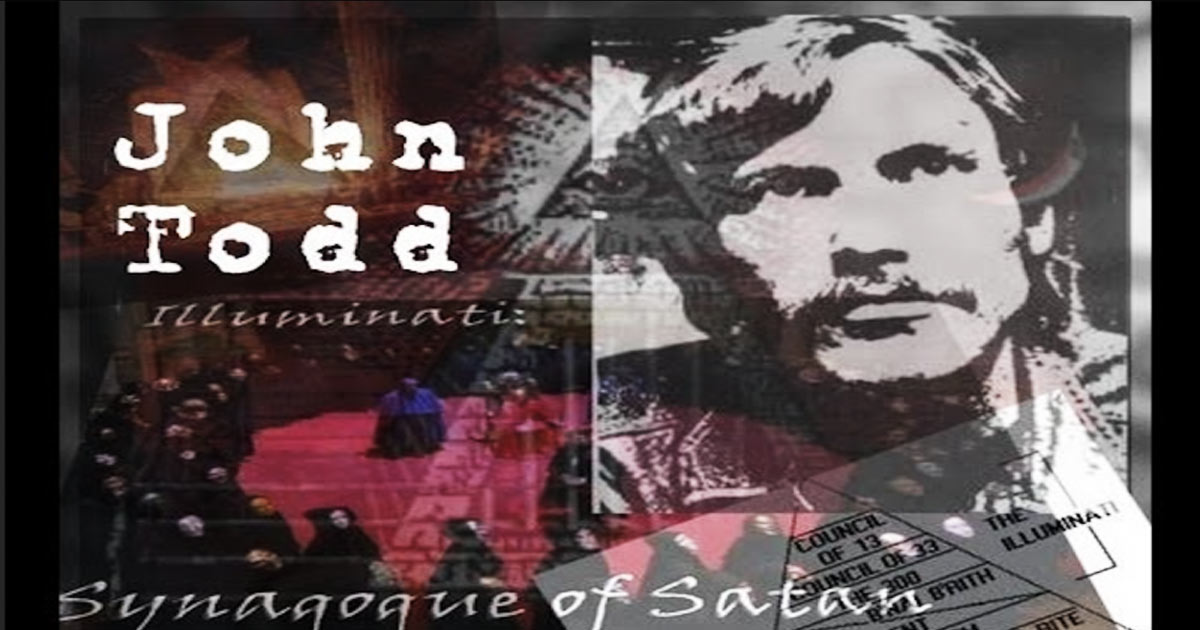 My source is John Todd (Collins), the highest Illuminati defector in history, a Witch High Priest, a member of the Council of Thirteen, and part of the Collins Illuminati bloodline that brought Witchcraft to the US in the 17th Century. [His lectures date back decades, but today’s current events unfold exactly as John said they will].

He casts the Illuminati as a vast, highly-organized and powerful occult conspiracy that holds mankind in a satanic vice.

The Illuminati are “thousands of different conspiracies operating in parallel,” he says. For example, the vows and initiation rites of witchcraft closely mirror Freemasonry.

In 1972, when Todd was “saved” [converted to Christianity] and exposed the Illuminati.

Before that, he ruled a 13-state US region consisting of 5000 covens, i.e. totaling 65,000 priests and priestesses. That’s just the ministers, not the congregation.

Amazingly, I stumbled upon Todd just last week. This champion of humanity would be unknown today if it wasn’t for a website maintained by “James”, an American living in Japan, and another belonging to the redoubtable WesPenre.

Skeptics say that if the Illuminati were real, there would be defectors. There ARE plenty of defectors; entire clinics that deal with victims of CIA mind control and satanic ritual abuse are full of them.

But the vocal ones get put away. In 1987 Todd was framed “for rape” and sentenced to 30 years. According to Fritz Springmeier, when Todd was freed in 1994, he was “picked up by a helicopter” and murdered. (“Bloodlines of the Illuminati” p.93)

But James’ website has a record of Todd being released from prison in South Carolina in April 2004 and then being re-incarcerated in the “Behavioral Disorder Treatment Unit” of the South Carolina Dept. of Mental Health. Calls to the Director Chad Lominick were not returned.

(Could someone find out if Todd is there and still alive? We owe him that at the very least.)

Todd has provided many shocking revelations, which Fritz Springmeier confirms could only come from a man who was in fact a member of the Council of Thirteen. Fritz Springmeier says the 13 Illuminati families consist of “generational Satanists.”

The Illuminati use Jews

Speaking in about 1978, Todd said the Illuminati use the Jews as a front.

“The Illuminati knows the people are going to find out about them … the best thing they can do is call your attention towards something else and say that’s that. So they have reflected the attention on Zionism …

“The only problem is that most of the people in the Illuminati aren’t Jews. Their founders were Jews by birth, but not by religion. But most of its leaders, except for the Rothschilds, are Gaelic: Scotch or French Gaelic. It’s got nothing to do with Jews.

“My family & most of the people serving on the Grand Druid, their family trees go back to the pagan temples in Rome & Greece & England, to the original priesthood. Some go back as far as Egypt & Babylon. It’s got nothing to do with the Jews.”

[David Livingstone writes: “Elizabeth Hirschmann and Donald Yates in their study, “When Scotland was Jewish”, documents the Jewish origin of many of Scotland’s leading families, beginning with the Sinclairs and Stuarts, but also the families of Forbes, Bruce, Campbell, Gordon, Caldwell, Fraser, Leslie, Christie, Kennedy, ad Cowan (Cohen).]

Todd makes clear the Rothschilds, a family of Sabbatean Jewish Cabalists [a.k.a. Sabbatean-Frankism], are at the very top the Illuminati hierarchy:

“On the top of each pyramid you will see a capstone with an eye in it. The capstone is the Rothschild Family or Tribunal that rules the Illuminati; they were the creators of it. The eye is Lucifer, their god and their voice. The first 3 top blocks are on every pyramid. The top block is what I was initiated into, the council of 13 called the Grand Druid Council.

“They only take orders from the Rothschilds and nobody else. They’re their private priesthood. The Council of 33 is directly under them, that is the 33 highest Masons in the World. The Council of 500, some of the richest people and conglomerates in the World-[including the Bilderbergs and the families like the Duponts and Kennedys.]

“The Golden Dawn is the organization of witchcraft, the 4th block up there, and it’s the Rothschild’s private coven. They choose every member personally.”

He says C.S. Lewis and J.R.R. Tolkein were both members of Golden Dawn. Grand Druid Isaac Bonewitz and the ACLU started an organization to sue Christians who defame the Occult. Todd includes Sc#entology and The National Council of Churches in the Illuminati structure.

If you want to learn what the Illuminati are trying to achieve, then you must read THIS ARTICLE.

Todd traces his defection to a meeting that took place around Labor Day 1972. They had received eight letters by diplomatic pouch from London.

“Dr. [Raymond] Buckland cut the seal on it and took out six letters that were sealed with this Illuminati crest. The first four were just business, money that we were to pay here and there and so on.

“Actually, the Grand Druid Council is nothing but glorified bankers, they write millions of dollars worth of checks to people in political and religious fields every month. But the last two letters led me to want to get out.

“Now even though I was a part of setting up a world government, I always kind of snickered that [this] was ever going to happen, that we were serious, that it was kind of a little game we were playing.

“As long as the Rothschilds had all of the money to spend on our plans, we went ahead and spent the money. So I never took it seriously until we opened the last two letters.

“Now in the first letter that we opened of those last two, was a chart, and in that chart it listed an eight-year plan for world take-over ending in the December month of 1980. …

“Next, the last letter we opened contained – now I’ll have to quote it and then I’ll have to explain, it, since witches say English but they say words that may not mean anything to you – it said:

“We have found a man whom we believe to be the son of Lucifer. We believe that through his works and our backing he can become ruler of this world, stop all wars, and bring peace, finally, to this war-stricken World.”

[As you will read the following paragraphs, please keep in mind that John Todd Collins exposed them back in the 1970s]:

Todd said the take-over plan involved economic breakdown where even Illuminati companies went broke. They have the means to survive such a catastrophe.

He says Phillip de Rothschild gave the plan to his mistress Ayn Rand for her novel “Atlas Shrugged.”

Todd also stated that in the face of economic breakdown, the Illuminati have trained a military force (including prison inmates) to take over the US.

This echoes Svali, another Illuminati defector, who has disappeared.

He says that, as in the Bolshevik and French Revolutions, millions will be killed in a “helter skelter” reign of terror. According to Todd, the only thing deterring this plan is widespread gun ownership among the US population.

In the 1980s, he spoke of a plan to reduce the world to rubble in World War Three, to spare only Jerusalem, and rule from there.

As suggested above, Todd says the Illuminati spend a lot of money bribing people, especially Christian evangelists and preachers.

“Much that you see in churches that you just think is liberalism is pay-offism. … It’s kind of hard for a minister … to turn down half-a-million dollars if it’s laid down as a bribe, and they can get even higher.

Todd says rock and roll music is designed to cast a demonic spell on the listener. I know this sounds farfetched but I urge you to listen to Todd’s presentation “Witchcraft of Rock and Roll” .

He says the Illuminati started Jesus Rock to control the message. The group, “KISS” stands for “Kings in Satanic Service.”

Anyone reading Todd’s lectures can see he was raised in Satanism as he claimed, and had a profound understanding. Fritz Springmeier, who is also imprisoned, said Todd knew things that had taken him (Springmeier) years to grasp.

Todd’s message seems too bizarre to be believed. But in the context of the phony 9-11 attacks, the phony war on terror, the suspension of Constitutional protections, the erection of a police state, the failure of Congress and the media, the dumbing down and homosexualization of society, the sexualization of children, the explicit Satanism, depravity and pornography in the “entertainment” industry, Todd’s explanation emerges as the most plausible of all.

Humanity is the victim of a monstrous conspiracy of unspeakable proportions. Our leaders, whom we pay to defend us from just this sort of thing, are either dupes or traitors.

Mankind has the intelligence and the means to evolve as intended, but we are being dragged back into an abyss by Evil incarnate.

What can we do? You tell me. They need to deceive the masses. Help spread the truth while we still can.

“Taking a Knee” is a Masonic Gesture of Deference