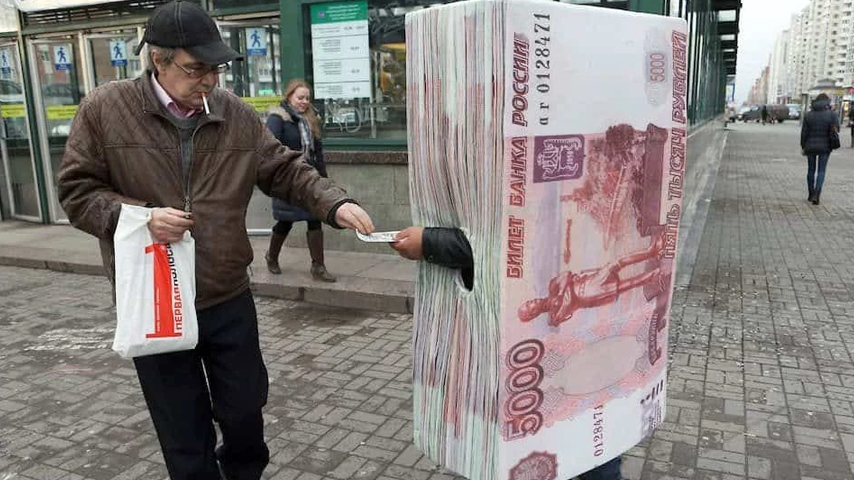 A strong, confident ruble handing out coupons for 2-for-1 taco specials. Source: Bank of Russia

Economic observations from a Moscow suburb

By now you are probably familiar with the hottest new TikTok trend, “destroy your economy to show solidarity with Ukraine.” Why are western nations doing this? They must be very bored.

But it would be unwise to underestimate the consequences of Washington’s economic seppuku (“Putin is rubber, you’re glue, whatever sanctions you impose bounce off Russia and stick to you”). Everyone is going to feel the pain. Yes, including Russia.

Russia was already facing formidable economic problems before being bombarded with 10 gazillion sanctions. So these sanctions are slightly annoying.

There are a number of “issues” that need to be addressed, ideally as soon as humanly possible, before Moscow can take a sanctions war victory lap.

Allow us to explain.

The ruble is so hot right now. But also a bit misunderstood

The ruble has returned to its pre-special-operation value (in USD), causing much rejoicing and gloating. The rebound has been cited as proof that western sanctions are weak and pathetic, but this is maybe not a super good way to gauge Russia’s economic vitality.

Here’s the thing: If I walked into a Russian bank and asked to exchange 80 rubles for one United States dollar, I’d get turned away. This raises an interesting philosophical question… is it really an “exchange rate” if you can’t use it to exchange stuff?

Russia has adopted extreme currency controls that have made it unprofitable—and in some cases, impossible—to purchase foreign currency. As one Russian outlet observed:

The measures of the Central Bank and the government “removed” the demand for foreign currency from the market. Almost no one can or wants to buy it, because there is no reason to. You can’t make money on speculation, you can’t buy imports, you can’t export them abroad, etc.

Authorities are so worried about Russians acquiring dirty US dollars that they are cracking down on illicit currency trading on social media. (On April 8, the Bank of Russia announced a “softening” of the currency control rules. Banks will be permitted to sell cash to customers starting on April 18.)

It’s possible that with the lifting of restrictions, the value of the dollar may rise to 90-100 rubles. This isn’t necessarily a bad thing, though. It’s a trade-off: a stronger ruble could help slow down inflation, while a weakened ruble would increase revenue and bolster the state budget.

The ruble may be rebounding against the US dollar, but it’s sinking against canned beans. Yes, just like everywhere else in the world, Russia is suffering from unpleasant amounts of inflation. Annual inflation is currently at nearly 17%, and analysts are warning things could get even more inflation-y.

Your humble Moscow correspondent is unaware of the widespread “empty shelf syndrome” that has reportedly popped up in Europe. However, in some parts of Russia, panic buying has led to severe sugar shortages. (The Federal Anti-monopoly Service determined that several retailers conspired to withhold sugar supplies, causing prices to skyrocket.)

On the plus side, Russia’s sugar mayhem has spawned many legendary news reports:

If people chill out with the panic buying and speculation, it’s predicted that food prices could decrease. Obviously, a stronger ruble has helped to reduce prices for imported consumer goods. We’ll see what happens. It’s a precarious situation.

It’s worth pointing out that in November, the Bank of Russia predicted a sharp rise in food prices. At the same time, the central bank said inflation would drop to 4% by the end of 2022. That’s… unlikely.

Russia began accelerating efforts to reduce its reliance on foreign imports after the “original” Ukraine crisis triggered sanctions (and counter-sanctions).

Import substitution has been a mixed bag. The policy has given a huge boost to Russian agriculture, but there’s a catch: Russian farmers are still heavily reliant on imports. Including things like… seeds:

Feed for animal husbandry, chemicals for the production of plant protection products, machinery and components, seeds, starters, meat processing equipment, hop harvesters—we are very dependent on imports on all these points, today these are pain points, the industry faces a serious issue of import substitution in a short time. The task is to try to prevent the price of food products from rising. The number of enterprises that could produce components and equipment is so small that in the short term it seems unthinkable that they will fully replace foreign firms, which occupied 70% of the market.

Russia’s public ombudsman for small and medium-sized businesses recently lashed out at authorities for “distorting” economic realities in the country:

Only now the people who were supposed to be responsible for the development of the economy found out that we don’t even produce nails ourselves… [P]roduction in [our] sector is 99% dependent on imports: raw materials, equipment, components.

Last week, Chairman of the State Duma Committee on Budget and Taxes, Andrey Makarov, called for a parliamentary inquiry to hunt down those responsible for import substitution’s failures.

“For many years we were told that all the problems of import substitution have been resolved… it suddenly became clear that so many problems need to be solved today,” he said.

On April 7, Prime Minister Mikhail Mishustin told the State Duma it would take six months to “reorganize” the economy.

For weeks there has been chatter about nationalizing foreign enterprises that left Russia, but this plan has apparently been put on hold. Russian media, citing government sources, said that a nationalization bill was shelved because negotiations between Moscow and foreign firms were ongoing and there was still hope some businesses would restore operations in the country.

Russia may lose 2 million jobs this year, bringing unemployment from the current 4.4% to 7.8%. This is still a very low unemployment rate compared to most countries but remember: all unemployment figures, all over the world, are extremely fake.

There’s no way to know what lies ahead, but there are signs that the Kremlin could be preparing for long-term economic uncertainty: a recent report published by Kommersant claimed the federal government may cancel direct elections of governors in September due to “the current economic situation.”

Apparently, there are concerns that soon “difficult socio-economic decisions” will need to be made at the regional level.

40 Million in US West Without Water in 2023 – Dane Wigington