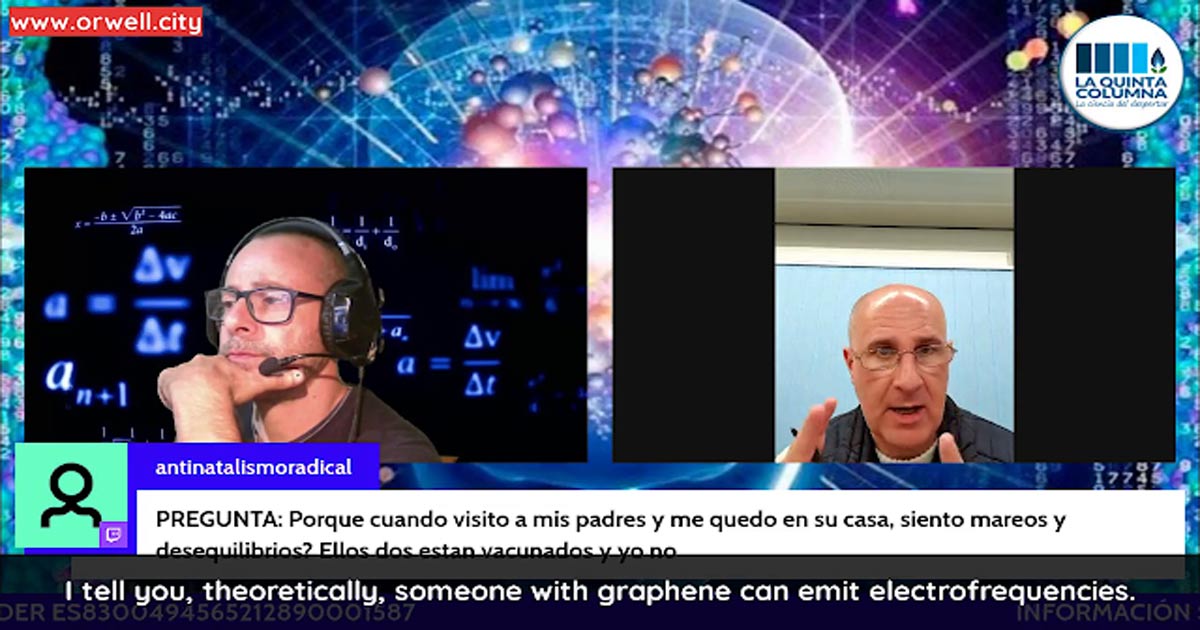 However, La Quinta Columna has offered a different explanation for several months now: the graphene oxide present in the body of the inoculated emits multiplied frequencies that end up affecting those who aren’t, making them feel sick.

Ricardo Delgado: This question says, ‘Why is it that when I visit my parents and stay at their house I feel dizzy and unbalanced? They are both vaccinated and I’m not.’

We were talking about contamination previously.

Dr. Sevillano: Yes, yes. I hear that very often. Many people tell me that. My sister herself has told me that. She lives with vaccinated people, and she told me that lately, she has palpitations and everything. And, the other day, I was arguing with her. She said to me: ‘Could it be that so-and-so…’. I don’t know what to tell her.

I tell you, theoretically, someone with graphene can emit electrofrequencies. Theoretically, they can do it. The articles exist.

Ricardo has detected these waves in his parents.

So, we know that vaccinated people emit. It could be that they emit frequencies to the point that they cause dizziness or palpitations, like my sister. That depends on the signal they have received, on their body temperature, physical activity that increases it… That’s to say, it depends on factors. But it’s possible. It’s possible that, if they are in a place where there are many waves, the graphene they carry in their body multiplies them. Maybe, they can cause dizziness to others.

And from that, you get these stories of people telling you that they slept with I don’t know who, and then, they feel sick. I mean, Astrid Stuckelberger herself is telling you that. She’s researching how graphene is contagious. But no, ma’am. This is not contagious. It isn’t. Graphene is simply emitting signals. That’s why people feel sick. They feel sick because they’re being irradiated. I mean, that’s something we have to establish at some point. But I hope we don’t have to do the studies, but hopefully, we’ll get it over with sooner, as I always say.