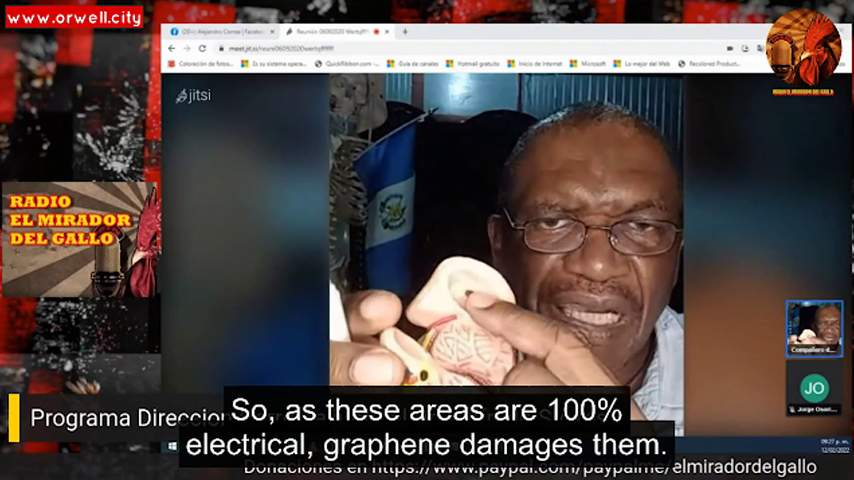 In a new interview for El Mirador del Gallo radio station, Dr. Wilfredo Stokes explained in a didactic way how graphene oxide settles in the heart and causes arrhythmias.

A heart arrhythmia is an irregular heartbeat. Heart rhythm problems (heart arrhythmias) occur when the electrical signals that coordinate the heart’s beats don’t work properly. The faulty signaling causes the heart to beat too fast (tachycardia), too slow (bradycardia) or irregularly.

While these side effects have been seen around the world and especially in athletes since last year, not all those affected nor those who’re seeing this type of heart problem in other people understand how it’s triggered, so Dr. Stokes decided to give a simple and accurate explanation.

Dr. Wilfredo Stokes: And the heart, on the inside, is divided into four. The two lower parts are called ventricles. And the two parts at the top are called the atria. Here are the left and right atria. When we open it up… This is an anatomical model of the heart, but it’s quite useful. It’s very handy. It turns out that the dividing parts of the heart are what make the heartbeat in rhythm.

And why does it do that? Well, because here in the right atrium… Let’s remember that the heart is like this. The right side and left side. So, I’m going to open it. I drew this little dot here in the right atrium. That little dot is called the sinus node. Sinus node. It’s the body’s natural pacemaker. And it has… And it’s the one that passes the electric current to the heart so that it beats in rhythm. It happens that inside, in the center of the cardiac muscle, a nerve passes. Here it’s painted black. Then, this nerve goes to the right and also the left side. These black lines are the Purkinje system, and this is where the current passes through so that the heart beats with the appropriate rhythm.

So, as these areas are 100% electrical, graphene damages them. Graphene also radiates, obviously, to this Purkinje system. The left and right branches of the His bundle. That’s what this structure is called.

What can this (graphene) generate besides cardiac arrhythmias? Well, what we have seen in some vaccinated patients. For example, here. This is called a complete bundle branch block. The structure is broken, the impulse becomes a little slower and in the electrocardiogram, the heart is seen to be wider. But we already know that this is because there is a complete or incomplete right or left bundle branch block of the heart.

And this would be an interesting thing to look for in vaccinated patients who don’t have cardiac complaints because it could be used, in a way, as a predictor. Especially if there’s a cardiac history before the cardiac checkup.

If the patient has a blockage, they should immediately stop exercising.