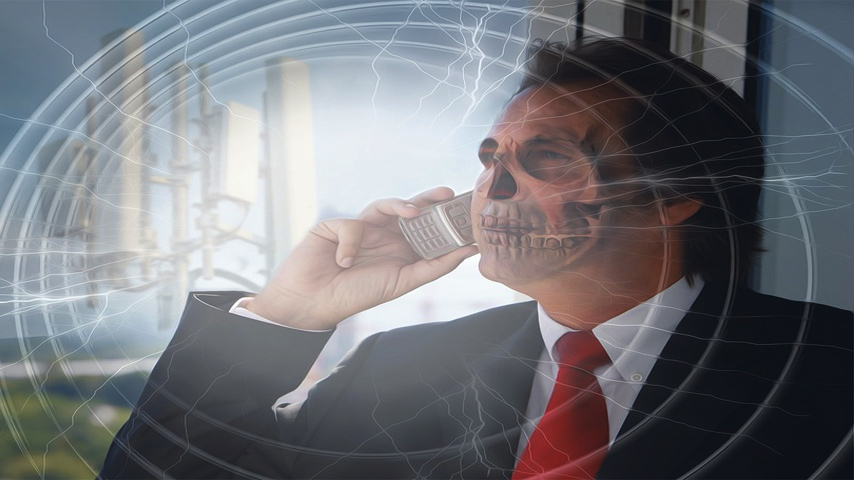 The wireless future is here. The model ostensibly turns human beings, via nano-implants, into antennas that can transmit information. They’re turning human beings into quasi-machines. Under this transhumanist agenda, the idea is to place nanotech inside our bodies we can communicate in real-time with the Smart Grid powered by way of 5G.

It’s called the ‘internet of bodies’ (IoB) or the ‘nanotech of things,’ (NToT), and it connects with the Internet of Things (IoT). One way this is accomplished is to embed graphene-made sensors into fabrics. Another is to implant or ingest the nanotech matter into the body, creating an internal technology platform.

For instance, Pfizer CEO Albert Bourla described the first-ever FDA-approved ‘electronic pill,’ which will invite ‘compliance,’ by sending a signal to your ‘doctor’ that you have indeed swallowed your ‘medication.’

“What we will see is a kind of fusion of the physical, digital, and biological world,” says Klaus Schwab of the World Economic Forum.

In order for all this connectivity to occur, these particles must contain GRAPHENE, a superconductive material that integrates with neurons in the body and brain. Nanotech, pioneered by Nanotech King Charles Lieber, is completely unregulated. Arguably, it already exists in food, drugs, vaccines, water., and the air we breathe. While there is no shortage of studies devoted to graphene-based nanomaterials (GBNs), systematic research on human health or environmental effects is severely lacking.

And yet integrating humans with hardware is supposedly being sold to us for our safety and health. In fact, on a site called Nano Robot Inventor, a 2008 paper titled Nanorobots to improve health care states:

“Recent developments in the field of nanoelectronics, with transducers progressively shrinking down to smaller sizes through nanotechnology and carbon nanotubes, are expected to result in innovative biomedical instrumentation possibilities, with new therapies and efficient diagnosis methodologies.”

“A transistor also allows the application of a voltage pulse, such devices might one day provide hybrid biological-digital computation, or deep-brain stimulation for Parkinson’s patients, or serve as an interface for a prosthetic that requires information processing at the point where it attaches to its owner.”

By the way, Lieber worked for communist China. Lieber has also worked on highly sensitive research projects for the US government Department of Defense (DOD).

Back in the 1930s, the CCP invented what is now known as “brainwashing.” The term is a literal translation of the Chinese term, Xi Nau, or “wash brain.” Arguably, Lieber has helped China and others upgrade to a modern version of mind control.

“ I was one of the first people — in 1998 — to figure out how to grow these nanoscale wires,” Lieber has stated.

If you do not believe me, just do a search for his brain-controlled mouse. And yet, Lieber went from supposed spy to a convicted tax evader. Who has explored the ethics of his inventions? It has already been proven that Lieber’s “injectable electronics” can be integrated within the brain with ‘minimal invasions,’ and can continue to function for at least a year. Who knows what happens after that?

The Purpose of AI: Brain-Computer Interface

At Code Conference 2016, Elon Musk stated publicly that given the current rate of artificial intelligence (AI) advancement, humans could ultimately expect to be left behind cognitively, intellectually “by a lot.” His solution to this unappealing fate is a novel brain-computer interface.

The internet of bodies (IoB) will tell us a lot, too. The sensors placed inside each person’s body will collect data…and that data has been determined to be more precious than oil.

To put things in perspective, ‘Big Pharma’, with the help of Big Tech, began usurping the medical data of millions of Americans as early as 2019. You can read my article titled Dr. Google Will See You Now. Alphabet, Google’s parent company, acquired FitBit for a cool $2.1 billion. Now, in Year Three of the Rona Regime, they are coming after us.

Imagine how much information they can technically collect by giving us a ‘viability score.’ In the Netherlands, their biometric mass surveillance practices are increasingly being used to control people’s access to healthcare, sports venues, travel, shopping, and other everyday activities. Activists actually have a campaign called ‘reclaim your face.’

While globalists aim to vaccinate the world and watch as our fellow man turns into ‘Magneto Man’, evidence indicates that Big Pharma, aided and abetted by VERY sick Rockefeller hospitals, are injecting us with nanoparticles meant to respond to signals while –oops – changing our very nature and DNA.

I understand, this sounds conspiratorial. If you haven’t gotten the memo that some of these jabs contain saline, why others have been sullied with microscopic nanoparticles that are conductive, consider:

In 2017, in a now-scrubbed-off-the-internet was a study from Italy looking at adjuvants. Researchers found that 15 traditional vaccines (and 44 variations of these), all manufactured by leading global companies, shared a previously unreported and troubling similarity: the vaccines were “heavily contaminated with a variety of nanoparticles.”

This is an indisputable fact. You just can’t see them. A nanometer is 1/80000th the diameter of an eyelash, one-millionth the size of a pinhead.

It’s all part of the Covid Industrial Complex.

In January 2020, when people in Wuhan began dropping like flies, I surmised that maybe nanotech — brought to us by Charlie Lieber via a mandated experimental injection or sprayed via drones – was parlaying with the Internet of Things. Interestingly, Wuhan, the capital of China’s Hubei Province was the first 5G demonstration zone in the Central Business District (CBD), according to a 5G cooperation agreement signed between China Mobile and local authorities on September 3, 2019.

That’s how I uncovered the connection between Lieber to 5G. It was taboo to talk about 5G back in 2020, so I coined the code words, Cinco Geo, to ward off censorship. For the record, I lived across the street from a test cell tower in Beachwood, Los Angeles. I developed a fever for 65 days and couldn’t sleep. While I could not prove it was the radiation, a meter endorsed by Dr. Mercola proved the 5G technology was definitely turned ON. That was 2019.

As we were locking down over the virus, cell towers across the country were going up. In fact, 5G cell tower installation was the only industry that was thriving during the early to mid-2020.

When it came to appealing net neutrality, Ajit Pai, the former Trump-appointed chairman of the U.S. Federal Communications Commission (FCC) said that the government had no place in the private sector. However, when it came to 5G, the government wasn’t only a necessity, it was a requirement. For example, when I recently called Miami-Dade County to try to find out whether they had amplified the 5G signal, I was referred to the federal government.

In fact, in 2018, the FCC initiated the “5G Fast Plan” to establish the United States’ superiority in the tech race. They intended to blanket the ENTIRE country with 5G small cells placed between every 2 to 10 homes. The industry claims they need so many towers because 5G uses millimeter waves that travel small distances and can be easily blocked by walls and even foliage. To compensate for this, engineers found ways to convert the waves to beams and intentionally direct them.

For the record, the CEO of Verizon helped bust the myth of millimeter waves and said that indeed the signals could penetrate through foliage and that the waves can cross 2000 feet from transmitter to receiver. And yet small cells continued to be built.

As part of the 5G Fast Plan, the FCC reformed rules that had been designed decades ago to accommodate small cells. The reforms were designed to ban ‘short-sighted’ municipalities who tried to block the deployment of the 5G technology. Local governments were given a reasonable deadline to approve or disapprove small-cell tower applications.

Small groups of people throughout the nation have attended local meetings to fight these eyesores but they don’t really stand a chance. At best, if the municipalities have money, the 5G poles are moved to another neighborhood. Of course, health studies on 5G have not been conducted.

On January 19, the day I got sick with what felt like radiation exposure, flights were suspended to the U.S., including to Miami, over 5G concerns. I threw up three times. I had watery stools. I felt anxious. I almost fainted in yoga class. And, I lost my sense of smell. I thought it was the Rona. But I wasn’t sick with the flu or cold symptoms. I had no cough or respiratory issues. My symptoms didn’t match the Moronic variant. One friend told me, ‘you must have gotten the Delta.’ I laughed to myself. Upon doing research, I also learned that the CDC acknowledges something called Acute Radiation Syndrome.

Can You See The (Smart) Light?

Did you know that every lighting installation can be a data infrastructure? Two-way communication can also be done via light signals.

Analysts predict the smart lighting market will grow more than 21% a year between 2018 and 2023. Much of this growth will be driven by wireless installations – and the exciting new applications they support. That’s why one company is putting Bluetooth low energy (BLE) technology in their connected components, enabling every fixture to communicate wirelessly with nearby Bluetooth-enabled smartphones.

Will wireless lighting controls soon be the new normal, making the benefits of smart lighting more accessible to organizations everywhere?

Let’s recap how all this connects (pun intended).

What if these injections were never “vaccines” against a virus? What if instead, the jabs have been a secret nanotech project developed to control the brains of the human population? (Until now, we don’t know specifically how they can modify our DNA via 5G).

Seemingly, some jabs were manufactured using nanotechnology. In Spain, it was even described as “secret nanoparticles.” These nanoparticles become magnetic when they reach the same temperature as the human body. When they remain in an under-zero-degree environment, they remain non-magnetic. Maybe one of the reasons they use the injections?

The graphene hydroxide works as an antenna for the electronic circuits they are injecting. If they can create transistors, they can also make an identifier like an RFID chip that can ping a number back, once the person is near a radiofrequency (RF) field. Graphene oxide in the brain creates transistors, and ostensibly its own network.

Thanks in big part to Lieber, molecules of GRAPHENE can interact with neurons in the brain in a remote mode using different radio frequencies (5G could be one of these). Can they also map the brain and transmit and receive INSTRUCTIONS remotely? Do these nanodevices and smart biosensors become programmable? Yes!

Consider the following passages from a 2008 paper:

“… In the proposed platform architecture, different programs and commands can be sent and information retrieved from inside [the] body through wireless communication, providing important aspects on the interface and medical instrumentation of nanorobots.”

“The proposed model uses electromagnetic radio waves to command and detect the current status of nanorobots inside the body. Therefore, the cell phone is applied for the medical nanorobotics platform. This occurs as the cell phone emits a magnetic signature to the passive CMOS sensors embedded in the nanorobot, which enables sending and receiving data through electromagnetic fields. From the last set of events recorded in pattern arrays, information can be reflected back by wave resonance.”

What happens when you integrate communication with nanorobots using RFID, mobile phones, and satellites and apply it to long-distance ubiquitous surveillance and health monitoring?

The jury is still not out.

“We are in a live exercise here …. to get this right!” Sec. Mike Pompeo stated during a presser back in January 2020.

“You should have let us know,” President Trump murmured back.

BBC Shows How Kids Can Walk Into Metaverse Strip Clubs