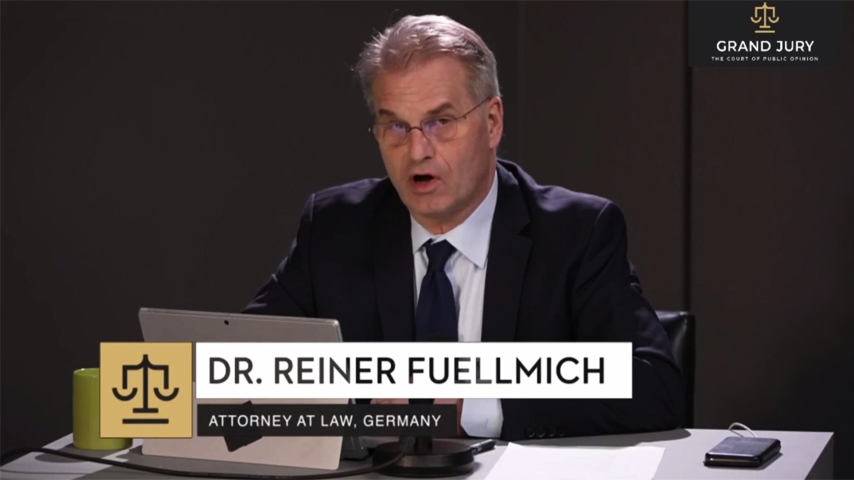 A group of international lawyers and a judge are conducting criminal investigation modeled after Grand Jury proceedings in order to present to the public all available evidence of COVID-19 Crimes Against Humanity to date against “leaders, organizers, instigators and accomplices” who aided, abetted or actively participated in the formulation and execution of a common plan for a pandemic.

Through showing a complete picture of what we are facing, including the geopolitical and historical backdrop – the proceeding is meant to create awareness about the factual collapse of the current, hijacked system and its institutions, and, as a consequence the necessity for the people themselves retaking their sovereignty.

Attorney Reiner Fuellmich presented his opening statements to what is being referred to as a Grand Jury in the court of public opinion. He laid out a case in which he said there was no corona pandemic but rather a “PCR test plandemic.”

The Corona Investigative Committee has been posting the panel’s findings and videos.

In serious criminal cases in the U.S., a so-called #grandjury is presented with the evidence at hand to convince them that this evidence is sufficient to bring public charges against the defendants.

We are adopting this model to prove to the public, with the help of real witnesses, lawyers, a judge and experts from around the world, that we are dealing with #crimesagainsthumanity that span the globe.

The goal is a coherent presentation of all the facts gathered to date, and thus to convince the populations of all countries that resistance here is not only possible but required of every individual.

Here are Fuellmich’s opening statements and he’s right on.

Check out the livestream at Grand-Jury.net.

Don’t give up on Freedom! Fight this Communist Agenda

Watch Meghan and Harry freak show. Are they really human?