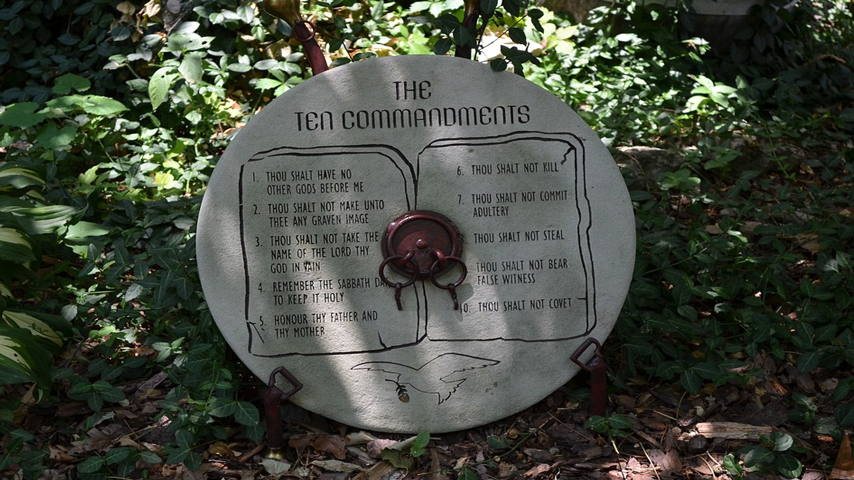 Anonymous: If you’d spend a fraction of the time studying and promoting God’s law as you do so-called natural law, perhaps we could divert the judgment of God on this nation.

First of all, I must say: I had no idea that I held such authority and power in the destiny of this nation; me, a mosquito.  Yes, bionic…but still.

Yet the more interesting topic: God’s Law vs. Natural Law.  No, I don’t see a difference in any meaningful sense, but play along.

Now, I could point to the ability to find natural law strictly via Scripture, as I have done in the past; or I might suggest that God created a universe ordered on principle and pattern (He did), with each created being having a purpose (it does), a telos – hence, “God’s Law” and “Natural Law” are therefore one and the same thing (at least on all the meaningful features, it seems to be so).

But, instead, I will this time pull on a string that was first explored here, via the question “why the flood?”  In other words, on what basis was man punished before the Law was revealed?

Now…that word “revealed.”  Is it only to mean “words I read in the Bible”?  Many who use the term “revealed” mean it this way.  But can it not also mean what has been revealed to us in and through His creation?  A simple question: does not the physiology, biology, and anatomy of a man and of a woman “reveal” something of God’s law?

For me, the answer is yes – and therefore I have no need to continue this post; this “picture” given to us by God in His creation paints a thousand words.  But for many, this is a bridge too far.  So…we only know the purpose of male and female-only by the words in Scripture (like intercourse, and therefore procreation, would never happen unless God commanded it).  Or…we know murder is wrong only because God said so (hence, it was not wrong before He said so).  So, for these, I continue.

Genesis 2: 16 And the Lord God commanded the man, saying, “You may surely eat of every tree of the garden, 17 but of the tree of the knowledge of good and evil you shall not eat, for in the day that you eat of it you shall surely die.”

The fruit was already eaten.  The cat was out of the bag.   The horse had left the barn.  You get the idea.

So, we are back to having no “God’s law,” in the sense that we can find written evidence in Scripture.

Genesis 3: 22 Then the Lord God said, “Behold, the man has become like one of us in knowing good and evil.

Really, the money verse.  The man knows good and evil (God’s law), not by any revelation from God, but…naturally…once he ate the fruit.  It is important that this is so, otherwise, we are left with the accusation for which we have no defense: God is an arbitrary God.  Man must know the difference between good and evil without God’s law; he must know it by his nature, the nature inherent in him once he ate the fruit.

Genesis 4: 3 In the course of time Cain brought to the Lord an offering of the fruit of the ground, 4 and Abel also brought of the firstborn of his flock and of their fat portions. And the Lord had regard for Abel and his offering, 5 but for Cain and his offering he had no regard. So Cain was very angry, and his face fell. 6 The Lord said to Cain, “Why are you angry, and why has your face fallen? 7 If you do well, will you not be accepted? And if you do not do well, sin is crouching at the door. Its desire is contrary to you, but you must rule over it.”

God had no regard for Cain and his offering?  Why?  God expected that Cain knew how to “do well.”  On what basis would God expect such a thing?

I find no law of God preceding these verses that Cain might have violated, nothing from God that said “I am not a vegetarian.”  On what basis was God displeased?  Was it a whim, random chaos, or arbitrary requirements?

Or was it something else, something not written or spoken, perhaps something breathed into man in his creation?  Was it something from the tree of the knowledge of good and evil?  If so, we don’t have the words, nor did Adam or Eve hear any words.  Merely by eating the fruit, did they discover the law…naturally?  The natural law?  Is this what they passed on to their descendants?

I don’t know, but I do know that whatever Cain violated, there is no “God’s law” that cautioned him against this.

Continuing with this passage:

8 Cain spoke to Abel his brother. And when they were in the field, Cain rose up against his brother Abel and killed him. 9 Then the Lord said to Cain, “Where is Abel your brother?” He said, “I do not know; am I my brother’s keeper?” 10 And the Lord said, “What have you done? The voice of your brother’s blood is crying to me from the ground. 11 And now you are cursed from the ground, which has opened its mouth to receive your brother’s blood from your hand. 12 When you work the ground, it shall no longer yield to you its strength. You shall be a fugitive and a wanderer on the earth.”

Was there a law against murder?  If so, it isn’t recorded anywhere in the verses preceding this passage.  On what basis did God punish Cain?  There was no “revealed law.”  How can this be?  Was it the fruit?

Genesis 6: 5 The Lord saw that the wickedness of man was great in the earth, and that every intention of the thoughts of his heart was only evil continually.

What wickedness?  What evil?  Show me the revealed law, show me the written regulation.  Or, does man somehow just “know.”  If so, how?

6 And the Lord regretted that he had made man on the earth, and it grieved him to his heart. 7 So the Lord said, “I will blot out man whom I have created from the face of the land, man and animals and creeping things and birds of the heavens, for I am sorry that I have made them.”

Punishment on the entire human race (save Adam and his family, as we know)?  For what?  We are well before the Ten Commandments here.

Did God ever say that violence was wrong?  Did He ever describe “corruption”?  We have no evidence of this.  Yet if the punishment was to be so severe, isn’t it appropriate that man was given a warning?  Was it the fruit?

Finally (and after the devastating punishment of the flood), we get the first “revealed” (and relevant) law, in chapter 9:

6 “Whoever sheds the blood of man, by man shall his blood be shed, for God made man in his own image.

And we still have nothing about theft, covetousness, etc.  Murder – that’s it.  Well, that and no eating flesh with blood.  Nothing more.  And only one family survived….

Cain was punished.  On what basis?  All of humanity save Noah?  Drowned.  But what did they do wrong?

If you’d spend a fraction of the time studying and promoting God’s law as you do so-called natural law, perhaps we could divert the judgment of God on this nation.

Who was promoting God’s law before Moses, or at least before the two laws given to Noah?  Perhaps all of humanity could have been saved from a God who punished arbitrarily.

But we know that this isn’t what God did.  Man was not punished arbitrarily; man was punished justly.  On what basis?  Maybe it was when God breathed into a man?  More likely, it was when he ate the fruit.  On this basis, man knew God’s law, man knew the difference between good and evil…and he knew it naturally.

And by violating God’s naturally-understood law, man was justly punished.

This natural law, like the fallen nature that we each inherit as a result of this first violation of God’s first command, is passed down to each one of us – descendants of Adam and Eve.

And this is why no man has any excuse.