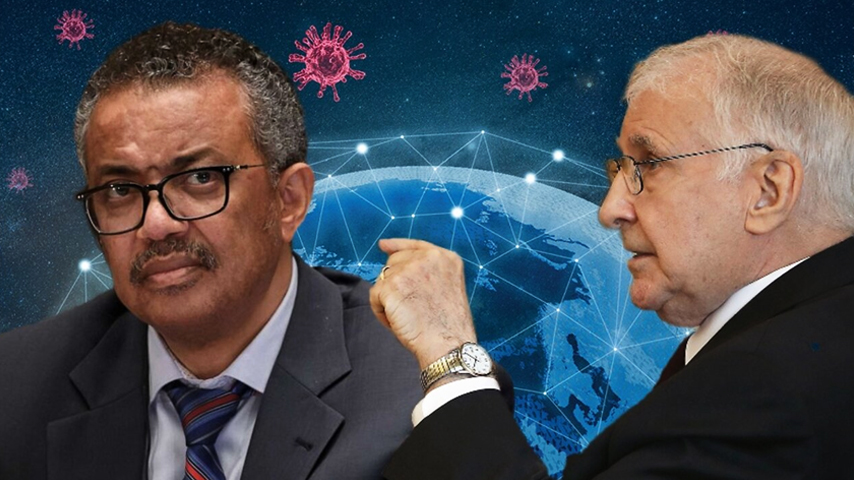 Everyone who has been paying attention knows that people like Klaus Schwab, Bill Gates, and George Soros are in the middle of their evil plans to vaccinate every man, woman, and child on earth. This will help them usher in The Great Reset. We also know the World Economic Forum, Centers for Disease Control and Prevention, and the Open Society Foundation are powerful entities bent on fundamentally changing the way the world operates so the elites can rule over a docile and subjugated remnant once depopulation is achieved.

Until recently, I believed that Tedros Adhanom Ghebreyesus and the World Health Organization were simply mid-level pawns of the elites. I assumed they were part of the propaganda and disinformation wing of the cabal used by the globalists to keep us intellectually herded in the wrong direction. They were useful in distracting from crimes committed by the Chinese Communist Party by backing the bat-soup-theory, for example. What I’ve learned from Dr. Peter Breggin leads me to believe the WHO is actually much higher on the globalist food chain.

On the latest episode of The Midnight Sentinel, Dr. Breggin revealed to me what he and his wife, Ginger, have discovered recently. Their book, COVID-19 and the Global Predators: We Are the Prey, had already been making waves with its bombshells about the powers-that-be. Now, they’ve discovered what I believe to be the next phase in the globalists’ Neo-Marxist takeover.

The World Health Organization is being positioned as the dominant governing body in the world. Those aren’t Dr. Breggin’s words. I’ve done some analysis of my own and it appears the manufactured healthcare emergency of Covid-19 is paving the way for the consolidation of problems and solutions. It’s the ultimate Hegelian Dialectic.

You’ve seen them consolidating and conflating the issues on which they want us focused. Climate change, the pandemic, racism, inequity… these and so many other manufactured challenges are being framed to prompt the people to call for a one-world solution. The only way we can tackle climate change is globally, they say. Now, they’re applying the same concept to all of the problems the globalist elites have created out of thin air.

Who are they positioning to run this new one-world governing body? Tedros, the WHO, and those who are controlling them from the top of the globalist food chain are being propped up for total control. In the future, I will go into a full-blown analysis of my claim, but first I want to focus on Dr. Breggin’s ideas and the splendid interview he gave me. As a primer, here’s his article on the subject from our great friends at America Out Loud:

As many governments are gradually being forced to pull back from COVID restrictions, we have been searching for the direction of the next global assault on individual freedom and the sovereign constitutional republics of the world, including the U.S.A. We have discovered the next move of the global predators—already in progress—in their escalating assaults against individual and political freedom.

The next big assault on human freedom involves a legalized takeover of national healthcare systems by the World Health Organization (WHO). This stealth attack—with its initial plans already backed by many nations—will begin full implementation in 2024 if it is not quickly recognized and fought!

Tedros is a Marxist stooge for the Chinese Communist Party (CCP).1 The Chinese Communist influence over WHO has been solid for more than a decade, and the party was able to install Tedros without any competition. He became the first and only Director-General who is not a physician and instead is a communist politician.

Now the Director-General of WHO, Tedros Adhanom Ghebreyesus—known simply as Tedros—has unveiled plans to take charge of all global health.

While addressing the WHO Executive Committee on January 24, 2022, Director-General Tedros spelled out his global health plan, including his final priority for his enormous scheme:2

“The fifth priority is to urgently strengthen WHO as the leading and directing authority on global health, at the center of the global health architecture.”

Tedros’s closing words to his report to the executive committee are chilling in their grandiosity and echo Marxist exhortations to cheering mobs by a Stalin, Mao, or Xi Jinping:

“We are one world, we have one health, we are one WHO.”

Tedros seeks to become super-Fauci for the world, and, like Fauci, he will do it on behalf of the global predators.

It Began with the Decade of Vaccines

The COVID-19 pandemic, organized by the global predators, was the spearhead of the first attack and relied heavily on their manipulation of WHO for its cover-up of China’s release of SARS-CoV-2 and for justifying vastly destructive shutdowns. In our new book, COVID-19 and the Global Predators: We Are the Prey; we go into great detail about the draconian plans for the SARS-CoV-2 pandemic that originated at least as early as 2010 when Bill Gates announced the Decade of Vaccines at Davos with Klaus Schwab, the founder of the World Economic Forum (WEF).3

Gates and Schwab were joined by the CEO of the Global Alliance for Vaccines and Immunization (GAVI), a consortium devoted to bloating the wealth of the pharmaceutical industry through the massive distribution of vaccines with public financing. At the same time, Anthony Fauci was brought onto Bill Gates’ vaccine advisory board at his Bill & Melinda Gates Foundation, guaranteeing U.S. support for Gates’ plans through Fauci’s National Institute of Allergy and Infectious Diseases (NIAID).

A theme for the Decade of Vaccines was “Public-Private Partnerships Drive Progress in Vaccine Development, Delivery”—essentially the precursor to the Great Reset establishing world governance of public and private health united in the spirit of fascism. By 2012, Gates achieved official UN approval for his scheme, establishing a broad network of global predators aimed at exploiting and dominating humanity through public health. Communist China would play a prominent role through its control over the UN and WHO and through its close relationships with global predators like Bill Gates, Klaus Schwab, Mike Bloomberg, Big Tech executives, and many other billionaires and world leaders.

A decade and more later, during COVID-19, WHO has proven its usefulness to the predators in orchestrating science, medicine, and public health in the suppression of human freedom and the generation of wealth and power for the globalists.

Putting WHO in charge of world health is an idea that found considerable support nearly a year ago.

On March 30, 2021, WHO announced in a headline, “Global health leaders unite in an urgent call for the international pandemic treaty.”4 The UN agency struck its globalist theme, “The COVID-19 pandemic has been a stark and painful reminder that nobody is safe until everyone is safe.” Making “everyone safe,” of course, requires worldwide totalitarianism. Using COVID-19 to advance itself, as all global predators have done, WHO declared, “This is an opportunity for the world to come together as a global community for peaceful cooperation that extends beyond the crisis.” The idea is “the principle of health for all”—universal health care organized by WHO as part of the Great Reset.

The general proposal already had the support of “25 heads of government and international agencies,” including the leaders of Great Britain (Boris Johnson), France (Emmanuel Macron), and Germany (Angela Merkel). Support from the European Council, the policy-setting body of the European Union, was so strong that Tedros announced a separate zoom press conference with its President, Charles Michel. These powerful European global predators remain united in using COVID-19 as a pretext for increasing their wealth, personal glory, and power.

The announced goal was to establish “a new treaty” to “signal high-level political action.” These treaties between nations and the UN agency WHO would be binding under international law. However, the goal of taking over the health systems of individual nations had not yet been clarified or emphasized.

On May 24, 2021, the European Council officially announced, “EU supports start of WHO process for the establishment of Pandemic Treaty: Council decision.”5

On December 1, 2021, the governing body of WHO, the World Health Assembly, with 94 member nations, “reached a consensus to kickstart the process to draft and negotiate a convention, agreement or other international instruments under the Constitution of the World Health Organization to strengthen pandemic prevention, preparedness and response.”6 This means that that the Constitution of the World Health Organization would literally replace the constitutions of individual nations in the arena of “pandemic prevention, preparedness, and response.” The world has already seen how any pandemic emergency, real or concocted, now or in the future, could then justify WHO taking over the entirety of government operations of sovereign nations, robbing all individuals of their freedoms, and fully crushing the democratic republics of the world.

The spirit of Communism can be felt throughout the document. We are told that the “purpose” of the new strategy will be “guided by a spirit of solidarity, anchored in the principles of fairness, inclusion, and transparency.” Notice, as in all pronouncements by global predators; there is no mention of individual rights, political liberty, or national sovereignty. The great engine of human progress, human freedom, will be replaced by the great destroyer of humanity, collectivism, under the rule of the elite.

Tucked into the report were the real goals that would be made more central by Tedros on January 24, 2022. Here are three main purposes or goals of the proposed treaty:

The report adds, “More specifically, such an instrument can enhance international cooperation in a number of priority areas, such as surveillance, alerts, and response, but also in general trust in the international health system.”

Clearly, they were building support for Tedros’s January 24, 2022 announcement that WHO would take over the international health care system.

The December 1, 2021 report also lays out the schedule for the unfolding of this Communist take over of world health and hence world governance. It is a rush program that requires an immediate organized resistance:

An intergovernmental negotiating body will now be constituted and hold its first meeting by March 1, 2022 (to agree on ways of working and timelines) and its second by August 1, 2022 (to discuss progress on a working draft). It will then deliver a progress report to the 76th World Health Assembly in 2023, with the aim to adopt the instrument by 2024.

We must act now! The plan is to have the treaties rolling out starting at the 76th assembly of WHO’s the legislative body in 2023, with the adoption of the treaty instrument by 2024—potentially transforming our world forever, with an inevitable progression toward a Chinese Communist Empire.

We return to Tedros’ description of his New World Order for his global health system:

“The fifth priority is to urgently strengthen WHO as the leading and directing authority on global health, at the center of the global health architecture. …

We are one world, we have one health, we are one WHO.”

This is the first of our series on this strategy to take over the world while the world is lulled to sleep by the temporary loosening of COVID-19 restrictions.