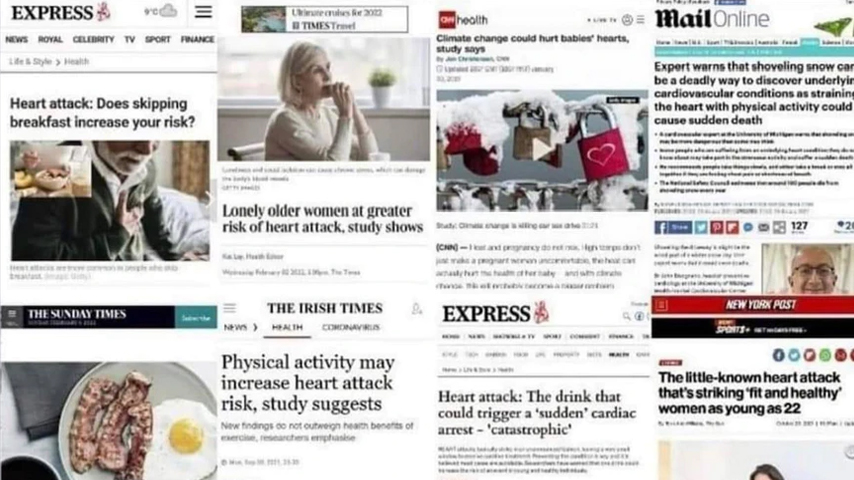 What happens when 3 billion vaccinated people have undiagnosed myocarditis?

I went to the nail salon this week, and there was a young woman working there who started weeping inconsolably in a corner. I asked the manager what was wrong. “She just lost her mother” was the reply. She had died in her sleep and suddenly thought she was perfectly healthy.

This last weekend, I attended the funeral of an old friend. He was perfectly healthy too, and then he got late-stage pancreatic cancer — and he was gone a few months later.

That was the exact same story for another friend. He was healthy as a horse, until he wasn’t — because he too had suddenly developed late-stage pancreatic cancer.

Not to mention a young (and very fit) mother I know who just got a check-up, and was told that she too has suddenly developed aggressive cancer in her early 40s.

The perfectly healthy are getting bad cancers much too frequently now.

The perfectly healthy are dying suddenly.

What all of them shared was being vaccinated.

Steve Kirsch on Substack has conducted a survey (done by a third party) and the results are so disturbing that nobody in the corporate media will touch it.

Ten million Americans had to be hospitalized after taking the vaccines.

At least 600,000 Americans died after getting vaccinated.

If Dr. Malone is correct and a majority of vaccinated people have undiagnosed myocarditis, that would mean 3 billion people are at serious risk of sudden cardiac death.

Wow, take a listen to this pilots story. More are coming out. These are the vaccine injuries cases. #vaccineinjuries #pilot #Covid_19 pic.twitter.com/ves4F5Mpzn

If you’ve been paying attention on social media — or, most of all, on Substack — then you already know that this man-made disaster was happening on a vast scale because you’ve seen far too many posts of soccer players suddenly collapsing on the field, or young people hooked up to machines at the hospital after getting their first clot shot, just like me.

In fact, mortality rates for young people across Europe are rising dramatically — yet another sign that the use of the experimental COVID vaccines should be halted immediately.

Healthy people are now dying so frequently and suddenly from heart failure that the totally corrupt corporate media has invented names like Sudden Adult Death Syndrome (“SADS”) to account for these obviously vaccine-related deaths.

Suddenly, toddlers are now having seizures after getting vaccinated as well.

As for vaccinated women who are pregnant, they are experiencing miscarriages and stillbirths at much higher rates than in the past.

What has the American medical community done about this catastrophe? They have aided and abetted it the entire way.

They have taken the Big Pharma blood money and the Federal government’s blood money — and they have stayed silent while they injected your friends and family with these deadly vaccines and watched them die.

When their patients asked for ivermectin to treat COVID, they denied them those prescriptions and treated them like deviants for asking — and they strongly recommended they get vaccinated instead.

When injured people had the audacity to complain about their vaccine injuries, our doctors and nurses gaslighted them, told them to stay silent, or told them they had no clue why they were having problems.

It’s the most shameful episode in the history of American medicine.

You might think that the COVID virus has gone away, but the global vaccine nightmare has just begun.

75,322 Dead 5,938,318 Injured Recorded in Europe and USA Following COVID Vaccines – Babies and Toddlers Hallucinating and Having Seizures After Shots