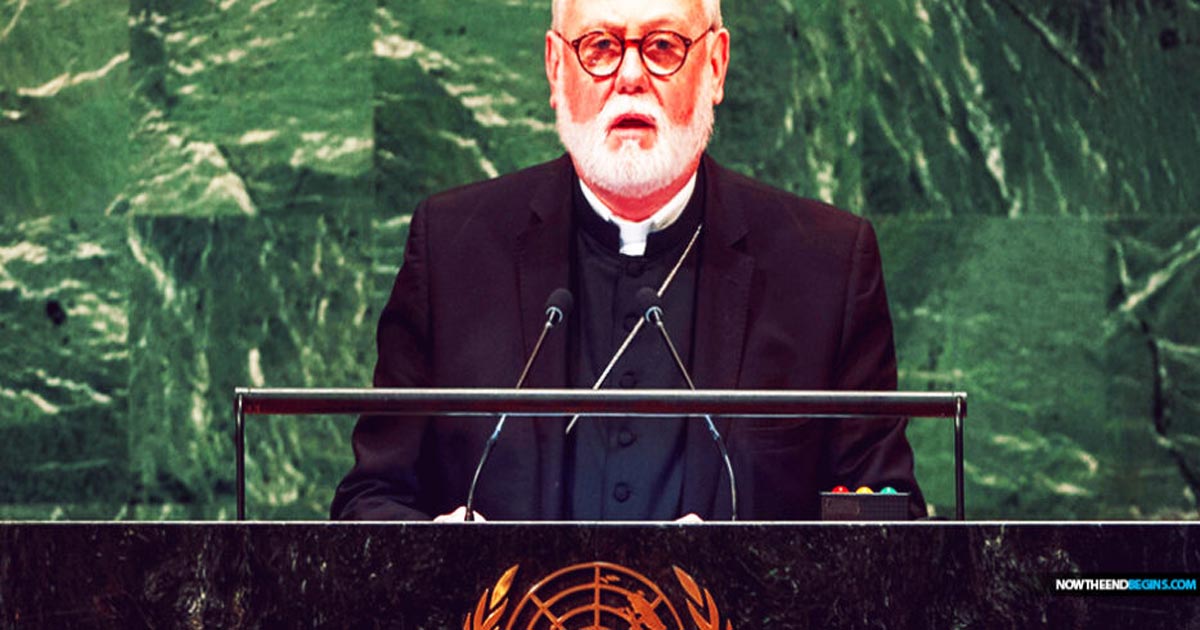 Yesterday, the big headline was ‘World Leader Reach Landmark Deal On Global Tax Rate’, and everyone got all excited at this latest New World Order update. But NTEB told you back in 2019 to prepare for the global tax because it heralds the coming time of Jacob’s trouble. Luke 2 tells us that there was a global tax at the First Advent of Jesus Christ, so it stands to reason that in the ramp-up to the Second Advent, you will see the same thing being played out.

“And it came to pass in those days, that there went out a decree from Caesar Augustus, that all the world should be taxed. (And this taxing was first made when Cyrenius was governor of Syria.) And all went to be taxed, everyone into his own city.” Luke 2:1-3 (KJB)

The Vatican has also been preparing for the coming global tax in addition to gathering together the world’s religious leaders for the UN COP26 Climate Conference that kicks off on Halloween night October 31st. Pope Francis sent his minion Vatican foreign minister Archbishop Paul Gallagher to call for increased financial redistribution of the world’s wealth to help the world’s poor. No mention was made of the untold tens of billions in accumulated wealth in the vaults of Vatican City, funny how their money is never redistributed, only yours.

Global tax, global vax, watch out for those words ending in ‘X, they’re a killer.

FROM BREITBART NEWS: In his address before a high-level U.N. meeting on inequality and prosperity, Archbishop Gallagher asserted that “fighting rampant inequality cannot be achieved without fiscal redistribution and increasing the progressiveness of income taxation schedules.”

“BETTER TAXATION CAN REDISTRIBUTE A PORTION OF THE RENTS ACCRUING TO BIG CORPORATIONS AND HELP BUILD UP TAX BASES, ESPECIALLY IN DEVELOPING COUNTRIES,” HE DECLARED.

The archbishop also noted how the global coronavirus pandemic has slowed humanity’s progressive elimination of extreme poverty. The World Bank, for instance, has estimated the pandemic “drove an additional 97 million people into extreme poverty in 2020.”

“As wages have decreased, millions of individuals have been plunged into poverty, and this has set back poverty reduction targets by nearly a decade,” Gallagher said, adding that those already in vulnerable situations “were disproportionately affected by its fallout.”

Our World in Data (OWD) has noted that in the past, the immense majority of mankind lived in what would be described today as “extreme poverty,” a situation that has been steadily improving over the past two centuries thanks to industrialization and rising productivity.

“This is surely one of the most remarkable achievements of humankind,” OWD declared.

Moreover, the average person on the planet is now 4.4 times richer than an average person in 1950, an astonishing example of ongoing wealth creation. In his address, the archbishop underscored the need for “climate stabilization and climate justice,” which includes the “decarbonization of our economies.” READ MORE

The digital dollar will not be anonymous, Federal Reserve chair Jerome Powell says