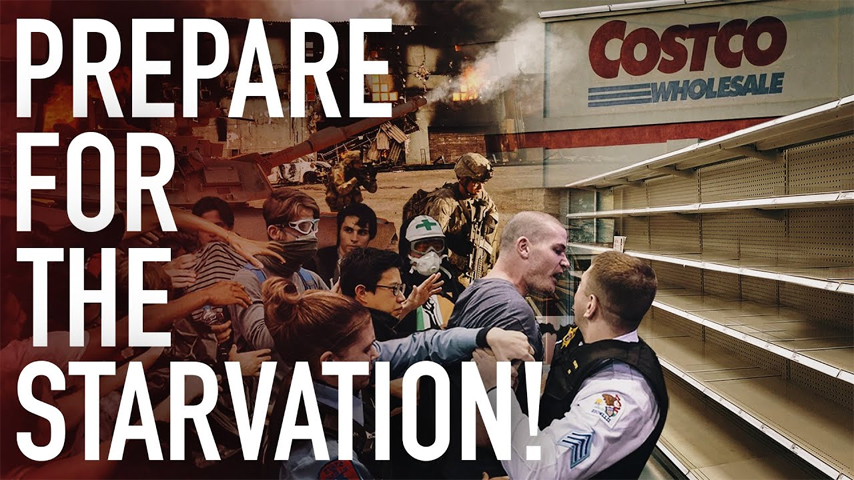 The total collapse of our food and energy systems is dangerously close, and it is safe to say that once that happens, the world will never be the same. Unfortunately, most people have no idea of the challenges we are going to face in the coming weeks and months. Many Americans are still thinking that their lives will go on as normal because the conflicts that recently erupted are on the other side of the globe. They have no idea about just how much their lives are going to be affected by the disruptions brought on by this tragic event.

We must remember that the world was already suffering the worst food crisis in modern history. Food supplies are still getting tighter and tighter with each passing month. To make things even worse, the countries in conflict are large exporters of grains and oils, and of course, the escalating conflict is going to change that. This is the beginning of a terrifying breakdown of our food and energy systems, and that is going to affect every man, woman, and child on the entire planet.

Given that both nations are the world’s largest producers of several types of grains and vegetable oils, the aggression is pushing food prices to skyrocket, and in the U.S. that spike is going to be particularly sharp. According to Kelly Goughary, the senior research analyst at Gro-Intelligence, an agriculture data platform, collectively, the countries usually account for 29 percent of all wheat exports and 75 percent of global exports of sunflower oil, So if exports from the two countries are reduced or completely cut off, how is the rest of the planet going to replace that output? Have you ever considered what is going to happen if the world faces a sweeping shortage of grains?

Moreover, American Bakers Association President Robb MacKie warned that consumers will start seeing rising prices in anything that has grain in it because the grain markets “are all tied to each other.” In essence, this means we will be paying much higher prices for bread, beer, cereal, animal feed among other things, which will impact billions of dollars worth of products. “In a situation where the whole supply chain is already stressed, if [the conflict] goes on more than a couple weeks, you will start to see food prices spinning out of control” he predicted.

On the other hand, the global energy crisis is also causing some alarming distortions on the market. In an attempt to ease the effects of the energy crunch Europe is facing, the U.S. is exporting large amounts of liquefied natural gas, but the costs do to so are very elevated. And since our domestic supply of natural gas is getting smaller, prices in the U.S. are currently 60% higher than a year ago and will continue to go higher, according to Rystad. The same goes for propane, coal, and electricity. And the latest increase in the price of oil, going over $100 per barrel, means that soon we will be paying five to seven dollars for a gallon of gasoline.

In a recent opinion piece, analyst Mike Adams, summed up the current state of affairs and shared some very gloomy forecasts about the near future. “We predict food riots in U.S. cities as food inflation makes even basic sustenance unaffordable to low-wage workers. The working poor is headed toward a massive uprising as both fuel and food become nearly impossible to afford, even at $12 – $15 hourly wages. At some point soon, just driving to work makes no economic sense because the gas is nearly as expensive as what people earn at work”.

Adams also warned that the consequences of the global conflict could lead us to the total collapse of our society and economy. The combination of global strife, rising food and fuel prices, rampant inflation, and currency debasement are likely to create “a total collapse of the world we once knew. Forget about affordable food or just-in-time delivery of anything. The world is about to become extremely inconvenient, expensive, and broken. The supply chain disruptions will get FAR worse from here forward,” he wrote. This is the most insane societal environment that we will soon find ourselves living in. This isn’t a drill. We’re moving towards a horrifying breakdown of our basic systems, and that is going to make our entire society fall into pieces, shaking our lives to the core as it happens.