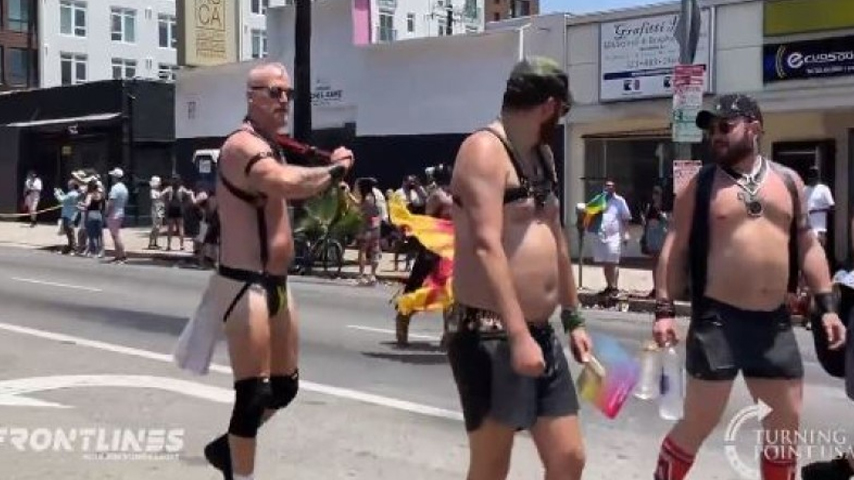 So-called “family friendly” displays on show during this weekend’s gay pride parades included children being exposed to bare breasts, fetish kinks like ‘puppy play’, twerking, half naked men whipping each other, and chants of “we have genitals and lube.”

Before the pride parades began, numerous prominent voices once again reiterated the ludicrous claim that LGBT pride marches were nothing more than PG and that parents should bring their kids to them.

News outlet Fatherly (yes really) asked the question, “Should You Take Your Kids To A Pride Parade?” before quickly making clear, “the answer is absolutely.”

Andy Seale, a strategies adviser in the WHO Department of Global HIV, Hepatitis and Sexually Transmitted Infections Programmes insisted that gay pride marches should go ahead despite the monkeypox outbreak before asserting that they were, “family friendly.”

Family friendly? Let’s see how that manifested itself.

This is a photo from an innocent family-friendly all ages drag brunch today in PA. pic.twitter.com/tHZ8i5DQ9c

DEPRAVITY: A drag queen standing on an egg plant emoji with dancers with bulging genitals says “WE HAVE GENITALS AND LUBE” to little children in the crowd | @TPUSA pic.twitter.com/YWAkjXkxM6

This is from a “family-friendly all ages” drag and pride event in Austin, TX today.

This is from a “family-friendly all ages drag brunch” in Des Moines, Iowa. It featured children dressing up in drag, performing, and collecting dollar bills from the audience. pic.twitter.com/5VurxD1BXE

DISTURBING: Pride LA here in Hollywood CA kicks off with a topless individual waving to little children in the crowd | @TPUSA pic.twitter.com/58Stlu5nHm

The “Puppy Play” community walks in the D.C. Pride March as a theybie watches on.

Multiple children in attendance both marching and watching this year. pic.twitter.com/BRCtRi7nK8

A man with breasts twerks naked in front of a police officer as children March behind. pic.twitter.com/8NeHfiU24d

Quite a bit of underage twerking during school performances as well. pic.twitter.com/ZbeHomwdxF

D.C. Pride- A marcher takes a moment to twerk for the crowd before a large group of rainbow-clad children march past. pic.twitter.com/qBTKH67oF9

As I’m sure you can agree, exposing children to such utter degeneracy is really no different than taking them to see Mickey Mouse at Disneyland!

In other news, it still seems a practical impossibility for many LGBT people to go on ‘pride’ marches wearing something more than their underwear.

“No One Told Me Any of What I’m Going to Tell You Now”: Detransitioned Man Shares Grim Details of Trans Surgeries