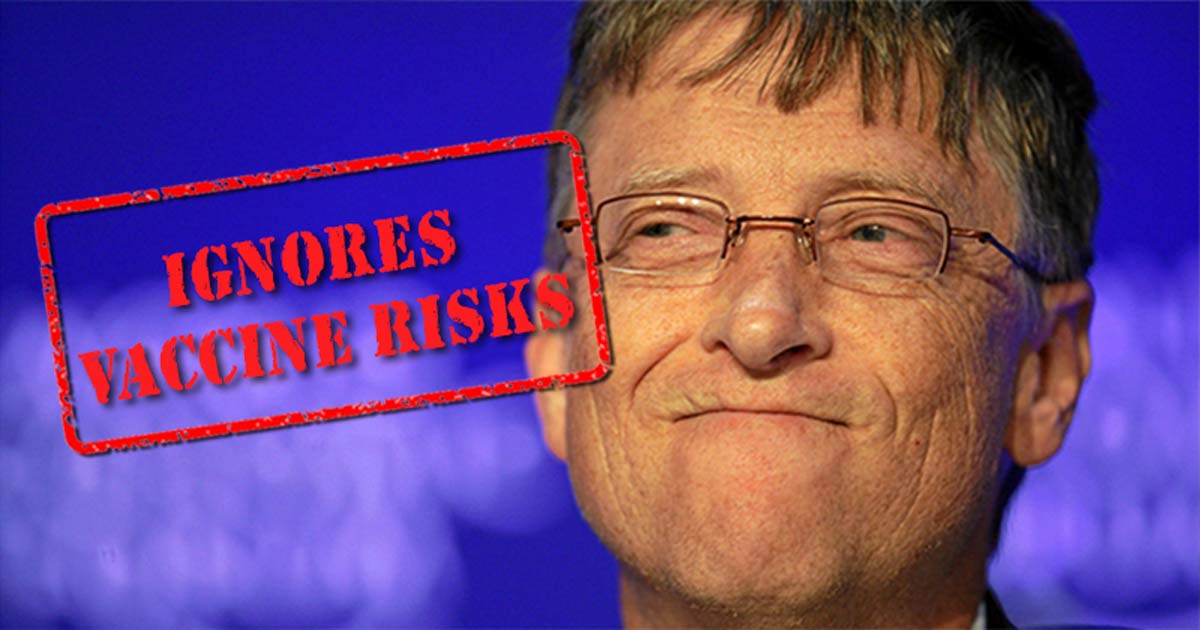 Just as COVID-19 (reportedly caused by the new coronavirus, SARS-CoV-2) has dominated the news cycle in 2020, so, too, the focus on an eventual coronavirus vaccine has crowded out needed attention to a wider range of prevention and treatment strategies. Self-appointed pandemic guru Bill Gates—through a complex tangle of direct and indirect funding mechanisms that includes being the World Health Organization’s (WHO’s) second largest donor—is gleefully leading the contingent promoting planet-wide coronavirus vaccination, unashamedly asserting that a vaccine “is the only thing that will allow us to return to normal.” Gates has the effrontery to make such claims despite financial conflicts of interest blatant enough to be noticed even by the credulous, and a lengthy trail of vaccine-related destruction left in the wake of Gates-funded vaccine programs around the world.

Globally, roughly 70 COVID-19 vaccines are in various stages of development—a veritable gold rush that will be all the more lucrative since Gates has made sure that the vaccines will be indemnified against lawsuits. Gates funding, through the Bill & Melinda Gates Foundation and the Coalition for Epidemic Preparedness Innovations (CEPI), is helping to spur the accelerated development of some of the leading contenders, including two of the three experimental vaccines rushed into Phase I trials in humans without any preliminary testing in animal models. (A third experimental vaccine will soon proceed to Phase II trials in China.) The National Institute of Allergy and Infectious Diseases (NIAID) is running the trial of one of these vaccines (mRNA-1273), co-developed under CEPI sponsorship with Cambridge-based biotech firm Moderna. Meanwhile, Pennsylvania-based Inovio Pharmaceuticals is conducting a Phase I trial of INO-4800, a vaccine being developed with massive infusions of funding from both the Gates Foundation and CEPI.

… Kim warned that even when vaccine makers appropriately begin the process with animal studies, “vaccine development is characterized by a high failure rate of often 93%.

In early April, Dr. Jerome H. Kim (Director General of the United-Nations-affiliated International Vaccine Institute) called attention to the “unprecedented speed” with which the Phase I trials launched, stating that it will be difficult to know whether a vaccine developed in a scant four, 12 or even 18 months “is really safe” and noting that the vaccine development process ordinarily takes anywhere from five to ten years. Although striving for enthusiasm about the “remarkable” speed-up, Kim warned that even when vaccine makers appropriately begin the process with animal studies, “vaccine development is characterized by a high failure rate of ‘often 93%.’”

Dr. Kim’s words of warning are far from theoretical. In the mid-to-late 2000s, scientists engaged in an ultimately futile effort to develop a vaccine to address the first SARS-related coronavirus (SARS-CoV). Researchers of the day developed four SARS-CoV vaccines that underwent testing in animal models and two (described in 2007 and 2008) that proceeded to Phase I trials in humans. The less-than-reassuring results of the animal studies, in particular, prompted one set of researchers to conclude that “Caution in proceeding to application of a SARS-CoV vaccine in humans is indicated” [emphasis added].

…all of the vaccinated mice, irrespective of the type of vaccine or the presence or absence of aluminum adjuvant, displayed unique lung damage not seen in the control mice …

In 2012, Texas researchers with combined expertise in molecular virology, microbiology, immunology, biodefense and emerging diseases reported in the journal PLoS ONE on their evaluation—in mice—of four candidate vaccines designed to prevent SARS-CoV. All four vaccines had run into trouble in earlier experimental studies, which showed that the vaccines had a tendency to induce pathologic lung reactions in the unfortunate recipients—whether mice, ferrets or nonhuman primates.

The Texas scientists reevaluated the safety, immunogenicity and efficacy of two whole-virus vaccines prepared in Vero tissue or Vero cell cultures (from African green monkey kidney); one recombinant (genetically engineered) DNA spike protein vaccine produced in insect cells; and their own virus-like particle (VLP) vaccine containing SARS-CoV proteins as well as mouse hepatitis coronavirus. They also compared versions of the vaccines containing an aluminum adjuvant with adjuvant-free formulations. The research team injected the experimental groups of mice with vaccine on days zero and 28, exposed them to live SARS-CoV on day 56 and sacrificed them two days later (day 58) to examine the lungs for virus and histopathology, comparing the experimental mice to control groups.

…all of the vaccinated mice, irrespective of the type of vaccine or the presence or absence of aluminum adjuvant, displayed unique lung damage not seen in the control mice …

All four vaccines appeared to induce antibodies against SARS-CoV two days after exposure to live virus. However, the second set of results—the findings that persuaded the researchers to urge the utmost caution in proceeding to human testing—showed that all of the vaccinated mice, irrespective of the type of vaccine or the presence or absence of aluminum adjuvant, displayed unique lung damage not seen in the control mice, and the pathology occurred in the absence of any detectable SARS coronavirus in the lungs. The researchers described this “Th2-type immunopathology”—indicated in part by abnormal levels of white blood cells called eosinophils—as suggestive of vaccine-induced “hypersensitivity to SARS-CoV components.”

… the RSV vaccine stimulated an unbalanced immune response that potentiated disease in the vaccine recipients upon subsequent exposure to RSV, often leading to hospitalization and sometimes leading to death.

To explain their findings, the Texas researchers pointed to studies showing similar immunopathologic reactions in human infants who, in the 1960s, received vaccines for respiratory syncytial virus (RSV). That body of research found that the RSV vaccine “stimulated an unbalanced immune response” that “potentiated” disease in the vaccine recipients upon subsequent exposure to RSV, often leading to hospitalization and sometimes leading to death. Given that the very basis for developing a SARS vaccine was to protect vaccine recipients from infectious SARS-CoV, the Texas researchers concluded that a vaccine that instead elicited an immunopathologic reaction (as had occurred in the 1960s with the RSV vaccine) was cause for concern.

More recently, in 2016, scientists expressed similar worries when children in the Philippines developed serious complications or died after receiving a vaccine to protect against dengue disease. Far from protecting the children, the vaccine dramatically worsened risks of severe complications in children exposed to dengue after vaccination. The deaths of roughly 600 children are now under criminal investigation.

Two other worries highlighted by the Texas researchers in 2012 are worth mentioning in light of today’s COVID-19 context. First, given that there are a number of human coronaviruses, the researchers suggested that their results raised important questions about the “safety of vaccinated persons exposed to other coronaviruses.” Second, they noted that although the two Phase I clinical trials of SARS-CoV vaccines in humans had reported the vaccines to “induce antibody responses and to be ‘safe,’ . . . the evidence for safety [was] for a short period of observation.” Today, knowing that even the WHO’s top experts are questioning how vaccine safety gets evaluated, one wonders how the rushed COVID-19 vaccine trials will be able to address SARS-CoV safety concerns to any meaningful degree.

Bill Gates and his foundation have longstanding ties with the good-cop/bad-cop duo that has been headlining the official COVID-19 narrative: Dr. Anthony Fauci, long-time NIAID director, and physician and retired Army colonel Dr. Deborah Birx, U.S. Global AIDS Coordinator and Special Representative for Global Health Diplomacy. It is noteworthy that the two government doctors are long-time allies, having cut their professional teeth working “side by side” on the AIDS epidemic in the 1980s and sharing overlapping career paths ever since. With HIV vaccine patents to both their names, neither Birx nor Fauci is a stranger to the lure and potential profits involved in vaccine development—regardless of whether the vaccine ever pans out.

In the early 2000s, Birx was one of the lead investigators of an HIV vaccine clinical trial in Thailand. Although the trial’s methodology and results drew severe criticism, Birx and others—including Fauci—spun the study as a success. As her reward, Birx then spent the next ten years directing the CDC’s Division of Global HIV/AIDS. In 2016, Fauci and NIAID dished out more taxpayer money to test the same HIV vaccine all over again in South Africa, but NIAID had to call a halt to the study in February 2020, when an interim review found that the vaccine was worthless.

Around the same time as the Thai vaccine trial, Fauci was active as one of the “principal architects” of the 2003 President’s Emergency Plan for AIDS Relief (PEPFAR), a still-ongoing program that has since ballooned into over 50 countries, where it coordinates (across seven different U.S. departments and agencies) promotion of HIV drugs and other measures. Since 2014, PEPFAR has been led by none other than Birx, who has been only too happy to accept generous Gates Foundation support. The foundation is the top source of philanthropic funding for all international HIV efforts, and development of an HIV vaccine remains one of its core “areas of focus.” In the face of recent Trump administration threats to slash PEPFAR’s budget, Birx has declared her willingness to seek out “other sources of funding wherever she can find them.”

The National Institutes of Health (NIH), of which NIAID is a part, have been joined at the hip with the Gates Foundation for many years, together funding 57% of “global-health research and development on diseases that disproportionately affect populations in low- and middle-income countries.” The close partnership has involved working to develop new vaccines (such as a malaria vaccine and a universal influenza vaccine) as well as mobilizing Gates funding streams to roll out NIH-developed vaccines across the developing world. In 2013, Gates declared himself “thrilled” with NIH for “pushing [vaccine research] forward” and stated, “We are just at the beginning of what we can do together.”

…the studies on unsafe vaccines for SARS-CoV, RSV and dengue suggest that Americans would be wise to ask the age-old question of ‘who benefits’ and push back against the billionaires and scientists looking to limit choices, control populations and make a financial killing.

Despite writing on March 26 in The New England Journal of Medicine that the COVID-19 case fatality rate is likely to be no worse than the rate observed for a severe seasonal flu, Dr. Fauci continues to pledge alliance to extreme measures, parroting Mr. Gates’ statements that more prolonged lockdowns are necessary and advising Americans to become a nation of obsessive-compulsive hand-washers who never share a handshake again. On these topics , Birx has been evasive and non-committal.

Recently, Dr. Zeke Emanuel—coronavirus advisor to both Joe Biden and the WHO, and one of the former ringleaders behind Obamacare—joined the fray, urging the banning of conferences, concerts, sporting events, religious services and restaurant meals for another 18 months, or “until we have a vaccine that protects everyone.” The Guardian obligingly echoed this vaccine-centric propaganda on April 8 when, reporting on a Chinese study just published in The Lancet, the British rag stated that “Lockdowns can’t end until Covid-19 vaccine found.”

Listening to these individuals’ carefully crafted public briefings on COVID-19 exit strategies, one could easily get the impression that a SARS-CoV-2 vaccine is, indeed, the only way out. For a population amped up on hysteria and fear, it may be challenging to accept other solutions—including the historically documented benefits of natural herd immunity—but the studies on unsafe vaccines for SARS-CoV, RSV and dengue suggest that Americans would be wise to ask the age-old question of “who benefits” and push back against the billionaires and scientists looking to limit choices, control populations and make a financial killing.

“ZOMBIE APOCALYPSE”! Brought to you by the CDC