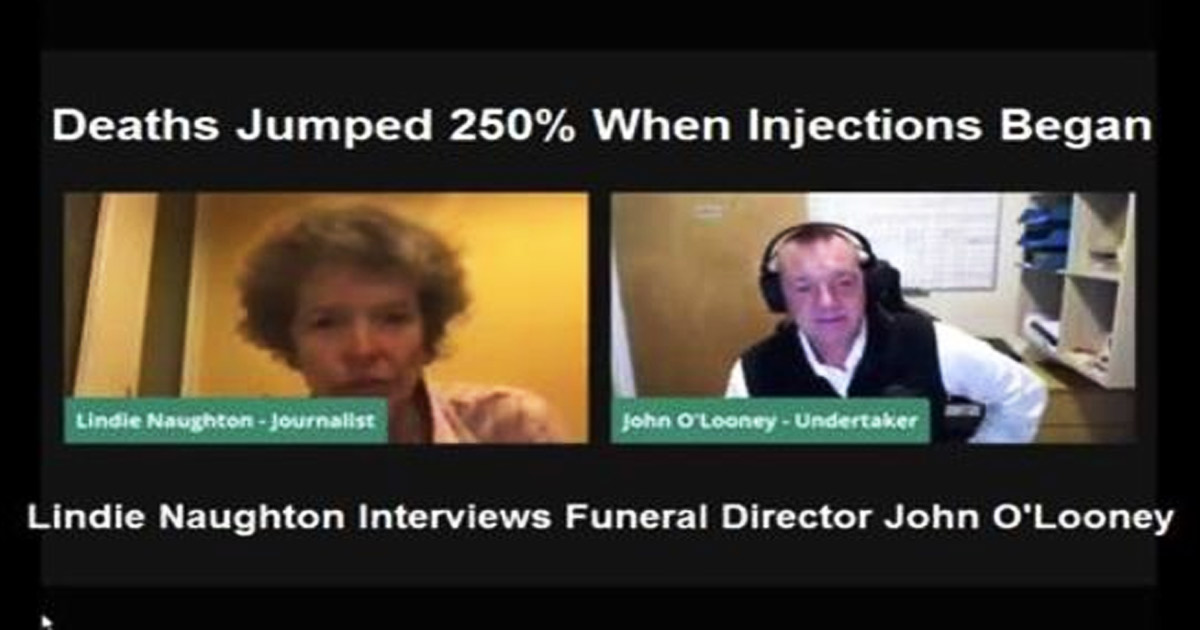 In this compelling video, a British funeral undertaker speaks to an independent journalist giving first-hand testimony revealing what has really been happening with the dead from care homes and hospitals.

Undertaker, John O’Looney talks of the lies and shenanigans spun by corrupt politicians and media to brainwash the public into believing there exists a ‘deadly virus. Lindie Naughton interviews this candid funeral director to learn that due to medication is given during the pandemic “Deaths jumped 250 percent when injections began.”

“As part of my work I visit hospitals routinely. During the pandemic, I got to speak to a lot of medical staff. We all understood we were being lied to and this was a fraud,” says O’Looney.

The undertaker explains it is routine that when collecting the dead for burial/cremation they keep a mortuary register (a kind of ‘guest book’) this shows a record of any usual events. The undertakers explain that he saw, during the pandemic, unusual patterns of high deaths at care homes where the vast majority of deaths were known by staff not to be from COVID19 but more likely due to the medication given to the elderly.


“Terminal cancer patients are routinely being recorded as COVID deaths.”

Too many independent analysts, there appears to be a correlation between the supposed new variants and vaccine breakthrough cases. New variants are suspected to be nothing of the sort and are actually adverse reactions to the experimental jabs.

Any and all deaths are glibly and dishonestly (and likely criminally, too!) being certified as from “COVID”  and such “variants” and this is masking what some observers believe is mass genocide.

As concern grows about the misrepresentations keen-eyed observers are asking why no “journalists” in the mainstream media have sought to investigate the true cause of the massive ‘delta wave’ that hit India in mid-2021 following their mass vaccination campaign, which began in January 2021. Only independent online citizen journalists and heroic whistleblowers seem to want to save us all from tyranny.

As we have identified in many articles here on Principia Scientific International, the pandemic is a coordinated international ploy based on allopathic germ theory, increasingly seen as a scam pushed by the major pharmaceuticals companies – a litany of costly and unnecessary procedures and fake vaccines.

Pfizer Documents Bombshell: ‘Stay Away from the Vaccinated’