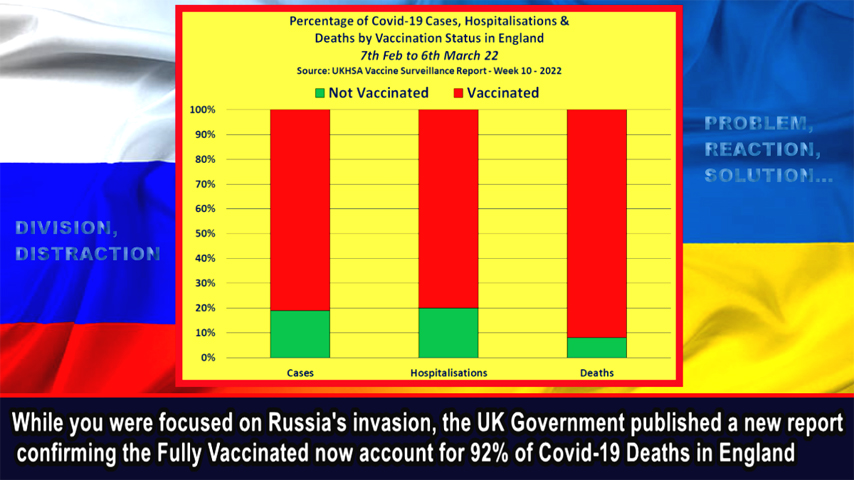 For three long weeks the mainstream media have chosen to broadcast nothing but unverified press releases from the Ukrainian Government, historic footage of conflict in Palestine and military parades; both passed off as the war in Ukraine, more Government press releases denying the Russian discovery of US-funded Bioweapon labs in Ukraine, and ridiculous claims that Putin has gone mad because he is suffering from ‘Long Covid’.

All this is being done to invoke fear among the public that World War III is just around the corner, and to make you wrongly blame Putin for the misery that has finally hit home in the form of inflation and tax rises. All thanks to over two years of the Government shaking the “magic money tree” to pay for things such as ‘Test and Trace’, a ridiculous quantity of experimental Covid-19 injections, and a Furlough scheme. A misery that has now been made ten times worse thanks to the sanctions placed on Russia by your Government.

But while the mainstream media has been hugely successful in making sure you focus on all of the above with their lies and propaganda, other terrible news is going unreported and slipping through the radar. Such as a new UK Government report which confirms the fully vaccinated population now account for 92% of Covid-19 Deaths in England, and shockingly, the vast majority of those deaths are among the triple vaccinated.

The BBC is lying to you

The UK Health Security Agency (UKHSA) publishes a weekly Covid-19 Vaccine Surveillance Report, the most recent of which was published Thursday 10th March 22, and it can be viewed here.

Table 10, found on page 41 of the latest report shows the number of Covid-19 cases by vaccination status in England between 7th Feb and 6th March 22, and it confirms the vast majority were recorded among the triple vaccinated population.

Overall the vaccinated population had 710,601 cases among them, meaning they accounted for 81% of all Covid-19 cases between 7th Feb and 6th March 22.

Table 11, found on page 42 of the latest report shows the number of Covid-19 hospitalisations by vaccination status in England between 7th Feb and 6th March 22, and it confirms the vast majority were again recorded among the triple vaccinated population.

Omicron, the dominant variant across the UK, causes a disease that is comparable to the common cold. And we know that children have never been at any real risk of suffering serious disease due to Covid-19. So why is it that they now account for more hospitalisations than they did when Delta, a much more severe variant, was dominant?

The table above is taken from Public Health England’s ‘Covid-19 Vaccine Surveillance Report – Week 36 – 2021‘, and it shows that between week 32 and week 35 of 2021 (when Delta was the dominant variant) there were just 404 Covid-19 hospitalisations recorded among under 18’s in England.

We can confirm that number of hospitalisations among under 18’s is typical for most of the weekly reports when Delta was dominant. So what’s going on here?

Could the UKHSA with the help of the NHS be fudging the numbers by ensuring every single child admitted to hospital with any ailment is tested, now that authorities have approved the roll-out of the Pfizer jab to 5 to 11 year olds?

Table 12b, found on page 44 of the latest report shows the number of Covid-19 deaths by vaccination status in England between 7th Feb and 6th March 22, and it confirms yet again that the vast majority were recorded among the triple vaccinated population.

But these shocking statistics all occurred when cases, hospitalisations and deaths were falling in the UK from the height reached over Christmas and January. And now official data found on the UK Government Covid-19 dashboard shows that cases and hospitalisations have begun to rise again since the 7th March.

So it appears the triple vaccinated population may be in for a torrid time this spring, especially when we consider they are statistically up to 262% more likely to be infected with Covid-19.

So there you have it, whilst you’ve been focused on Russia’s invasion of Ukraine, the UK Government released a new report confirming the fully vaccinated now account for 92% of Covid-19 deaths in England. Based on this we predict a “Super Booster” campaign may be coming to a town near you, much sooner than you think.

The Boosted Deaths in Canada just Surpassed the Fully Vaccinated