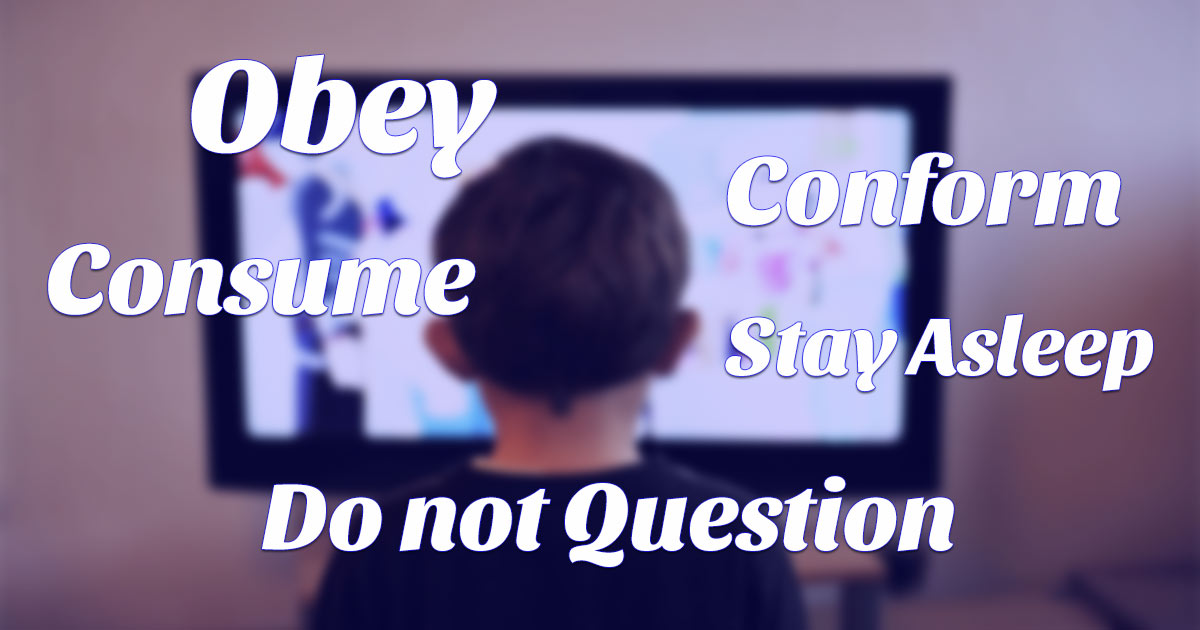 Starting with Gutenberg’s printing press, then Thomas Edison’s motion picture camera and the introduction of celluloid and the silver screen, and later the cathode ray tube – a select few media institutions, and the men behind them, have enjoyed monolithic monopoly over the information we see and hear.

Their machine is awesome and seemingly unstoppable, and reaches anywhere, anytime and into the minds of all it targets.

How does one navigate, let alone make sense, of this 21st century matrix?

Mainstream Media is Consuming you

If this transformation were truly an organic process, then most critical minds would be able to rationally deal with our total immersion in media. But the evolution of technology and how we interact with it is not so easy to articulate. As platforms and choice continue to proliferate, the situation is becoming more attuned to Chaos Theory than Darwinian Theory. The media and its modern marketing arms tell us it’s all progress. By now, their role is well defined – as the initial express vehicle on which all new ideas and advancements are delivered into the mainstream. In most cases, one could say the public are now fully preconditioned to accept new media on arrival.

Whether we care to admit it or not, there are varying degrees of brainwashing and behavioral conditioning with films and TV. That’s why they call it programming. How many of us find ourselves automatically using quotes from popular films or TV shows? And how many of us emulate the fashion or hairstyles of those we see on the screen?

It happens much more than most people care to admit. Most of us are completely unaware of how much we mimic what we see, and repeat what we hear.

In the 1976 classic, The Network, the film’s main character, a television prophet named Howard Beale, delivers an unforgettable sermon to his studio audience, perfectly describing the raw nature of mass media in a societal context:

And why is that woe to us? Because you people and sixty-two million other Americans are listening to me right now. Because less than three percent of you people read books. Because less than fifteen percent of you read newspapers. Because the only truth you know is what you get over this tube. Right now, there is a whole, an entire generation that never knew anything that didn’t come out of this tube. This tube is the Gospel. The ultimate revelation! This tube can make or break Presidents, Popes, Prime Ministers. This tube is the most awesome, god-damn force in the whole godless world. And woe is us if it ever falls into the hands of the wrong people.

Beale must have known it had already fallen into the hands of the wrong people, namely organised crime, the CIA, the Military Industrial Complex and the transnational global elite.

The reality is that studio and record executives, and their media producers, are responsible for much of society’s behaviour, as well as the popular cultural archetypes that people adopt. For sure, this is a tremendous amount of power, and don’t think for a moment that executives do not know this. The same can be said for their CIA and Pentagon ‘advisors’ too.

When in high gear, this culture machine commands any of the following behaviors en masse; foul language, profanity, sexual promiscuity, pre- and extra-marital affairs, drug use and abuse, dysfunctional relationships and families, racial tension, violence, defacing religious symbols, Satanic ritualism, undermining authority figures like fathers, teachers, clergy, and even the worship of the Orwellian security state. It’s all fair game for the media and entertainment industry.

How is anyone expected to survive this psychological and spiritual onslaught?

The average person living in a technologically advanced first world society will watch an average of three hours of television per day, as well as another two to three hours spent on computerised electronic devices. If we want to survive with our minds and souls intact, at some point in our lives we have to muster the courage to turn off, and tune-out.

The sheer volume of content now available means each person must be judicious about how they spend their time. The old binary option for ‘Generation X’, when you said to yourself, “Alright, I have three hours to myself. How am I going to spend that time? Do I watch TV, or do I read a book?” – may no longer apply.

For Millennials (and others too), it’s more like, “Do I watch TV, YouTube, hangout on Periscope, Instagram, Facebook, or do I stream Hulu, Amazon Prime, iTunes or Roku, or do I read online, with my Kindle, or my Nook, or who knows, maybe a book?”

The term binge watching also comes to mind. Seven seasons with 10 episodes each, with a continuous interconnected cliffhanger plot line – enough suspense and intrigue to trigger endorphins in the brain to keep you awake all night, enough to watch an entire season of 24… in 24 hours.

If things are really that bad, or you are feeling anxious over an obsession with keeping up with content, then there is a high probability you are under some degree of media-driven mind control.

The first step in liberation from the machine is to become a more active consumer of information and content, as opposed to being a passive sieve. That’s not to say you cannot enjoy a movie, or watch a good ball game now and again – everyone needs to step off the hampster wheel and indulge in entertainment from time to time.

To defeat the linear, force-feeding tube of information and social conditioning by Hollywood and mainstream media… simply read more. Read whatever you can get your hands on – books, print journals, magazines, online articles, and newspapers. Your knowledge retention rate will be higher, and the experience of reading will hone your mental focus, self-reflection and clarity of thought.

Rather than waste hours watching TV or sitting through a sub-par Hollywood cinema production that you know will be disappointing in the end, instead try listening to radio shows, or podcasts. Instead of drifting down rabbit holes on YouTube, visit websites like Soundcloud instead, and get immersed in their vast audio jungle.

Another useful practice in liberating your mind from group-think and staying less susceptible to mainstream brainwashing is to make a concerted effort to occasionally read, watch or listen to content from media outlets or sources that you do not like, or generally do not agree with. This is important for a number of reasons. If you are truly confident in your political beliefs, your worldview or your grasp of current and historical events, then it shouldn’t bother you to hear what ‘the other side’ has to say. If you really want to successfully defend your position, opinion, or ideology, or your side of the political spectrum – then it helps to know the contrarian arguments, and you should want to analyse them as much as possible. This type of open-minded information consumerism is exactly what the establishment culture-makers and matrix operatives do not want you to be involved with – because a confident, well-informed and objective voice is antithetical to the prevailing divide and rule, bipolar political paradigm program that social engineers are currently running on Western society.

Also, should you ever find yourself growing tired of reading about it, then go and experience it.

Learn How to Learn

The American poet Robert Frost famously said, “We all proceed with insufficient knowledge.”

In the education of the mind, everyone must submit (at least once a day) to the fact that no matter how smart or knowledgeable you think you are on any given topic or event, you actually know very little. You may know more than the person next to you, and you might even be an expert on one layer of a lattice, but more than likely would only have above average knowledge of one corner of the galaxy that is your area of expertise.

Unfortunately, as far as social media is concerned, it remains a crude platform for human interaction and learning. Your 13.5 inch laptop screen doesn’t always deliver when it comes to human stimulation and speed of exchange that you’ll get through human conversation. The solution to this problem is a simple one – we need to talk more. Talk more, and talk about anything. The most powerful microprocessor on the planet is not in the basement of the NSA in Provo, Utah, or in Jeff Bezos’ server yards in Colorado – it’s between your ears.

Also, rather than preaching to the choir, try and strike up conversations with people who are smarter or more experienced than you. This is one of the fastest ways to increase your knowledge base and gain valuable insights which you will never get from the mainstream media.

Remember: you’re not a robot, so stop acting like one.

There’s a big world out there – and it’s much bigger than anything inside your TV or smart phone.