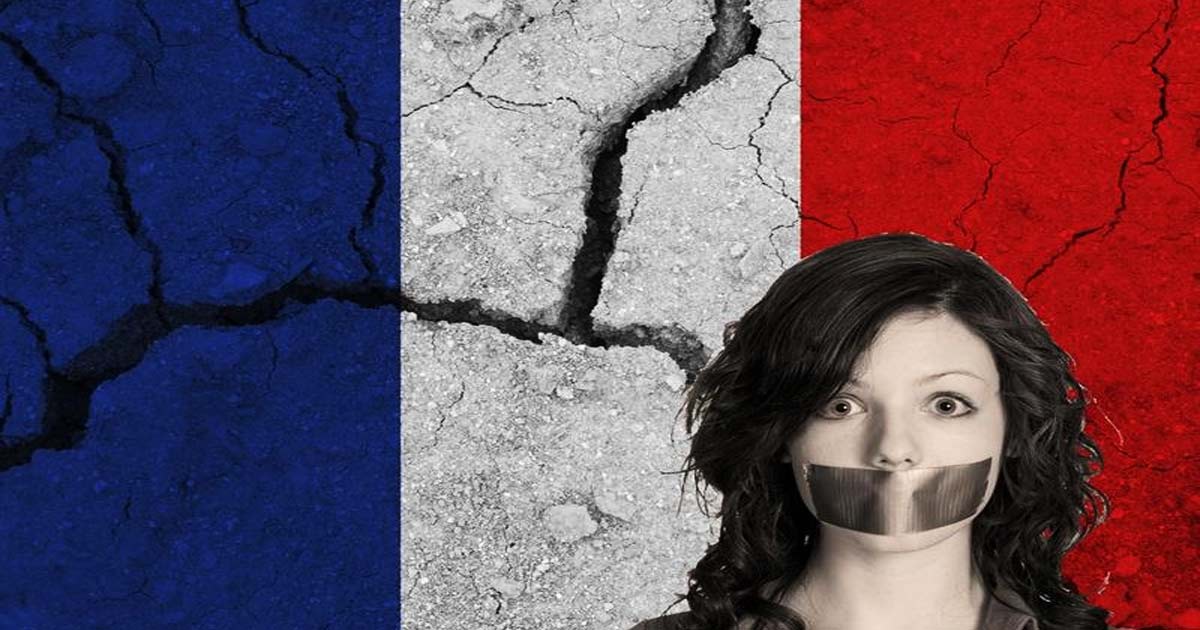 Authored by Judith Bergman via The Gatestone Institute,

On May 13, the French parliament adopted a law that requires online platforms such as Facebook, Google, Twitter, YouTube, Instagram and Snapchat to remove reported “hateful content” within 24 hours and “terrorist content” within one hour. Failure to do so could result in exorbitant fines of up to €1.25 million or 4% of the platform’s global revenue in cases of repeated failure to remove the content.

The scope of online content deemed “hateful” under what is known as the “Avia law” (after the lawmaker who proposed it) is, as is common in European hate speech laws, very broadly demarcated and includes “incitement to hatred, or discriminatory insult, on the grounds of race, religion, ethnicity, gender, sexual orientation or disability”.

The French law was directly inspired by Germany’s controversial NetzDG law, adopted in in October 2017, and it is explicitly mentioned in the introduction to the Avia law.

“This law proposal aims to combat the spread of hate speech on the internet,” it is stated in the introduction to the Avia law.

“No one can dispute the exacerbation of hate speech in our society… the attack[s] on others for what they are, because of their origins, their religion, their sex or their sexual orientation… hints… [at] the darkest hours in our history… the fight against hatred, racism and anti-Semitism on the Internet is an objective of public interest that justifies…strong and effective provisions… this tool of openness [the internet] to the world, of access to information, to culture, to communication, can become a real hell for those who become the target of ‘haters’ or harassers hidden behind screens and pseudonyms. According to a survey carried out in May 2016, 58% of our fellow citizens consider the internet to be the main locus of hate speech. More than 70% say they have already been confronted with hate speech on social networks. For younger people in particular, cyber-harassment can be devastating…However… Few complaints are filed, few investigations are successful, few convictions are handed down – this creates a vicious circle…”

Having acknowledged that online “hatred” is tricky to prosecute under the existing laws because “few complaints are filed and few investigations are successful, few convictions are handed down”, but nevertheless determined that censorship is the panacea to the perceived problems, the French government decided to delegate the task of state censorship to the online platforms themselves. Private companies will now be obliged to act as thought police on behalf of the French state or face heavy fines. As in Germany, such legislation is bound to lead to online platforms exhibiting overzealousness in the removal or blocking of anything that might conceivably be perceived as “hateful” to avoid being fined.

The purpose of the law appears to have been twofold — not only to achieve the actual censorship of speech by the removal or blocking of online posts, but also the (inevitably) chilling effects of censorship on online debate in general. “People will think twice before crossing the red line if they know that there is a high likelihood that they will be held to account,” French Minister of Justice Nicole Belloubet said in what sounded ominous for a government representative to say in a country that still claims to be democratic.

From the beginning, when French President Emmanuel Macron first tasked the group led by Laetitia Avia with preparing the law, the proposal was met with criticism from a number of groups and organizations. France’s National Consultative Commission on Human Rights criticized the law proposal for increasing the risk of censorship, and La Quadrature du Net, an organization that works against censorship and surveillance online, warned that, “Short removal times and large fines for non-compliance further incentivize platforms to over-remove content”. The London-based free speech organization Article 19 commented that the law threatened free speech in France. According to Gabrielle Guillemin, Senior Legal Officer at Article 19:

“The Avia Law will effectively enable the French state to devolve online censorship to the dominant tech companies, who will be expected to act as judge and jury in determining what is ‘manifestly illegal’ content. The Law covers a wide range of content so this is not always going to be a straightforward decision.

“Given the timeframes by which companies have to respond, we can expect them to err on the side of caution when it comes to deciding whether content is legal or not. They will also have to resort to using filters that will inevitably lead to the over-removal of content.

“The French government has ignored the concerns raised by digital rights and free speech groups, and the result will be a chilling effect on online freedom of expression in France”.

The passed law was also met with disapproval in France. On May 22, Guillaume Roquette, editorial director of Le Figaro Magazine, wrote:

“Under the pretext of fighting ‘hateful’ content on the Internet, it [the Avia law] is setting up a system of censorship that is as effective as it is dangerous… ‘hate’ is the pretext systematically used by those who want to silence dissenting opinions.

“This text [law] is dangerous because, according to lawyer François Sureau, ‘it introduces criminal punishment… of the conscience’. It is dangerous…because it delegates the regulation of public debate… on the internet to American multinationals… A democracy worthy of its name should accept freedom of expression”.

Jean Yves Camus. from Charlie Hebdo, called the law “a placebo for fighting hate” and pointed out that the “hyper-focus on online hate” masks the real danger:

“It is not online hatred that killed Ilan Halimi, Sarah Halimi, Mireille Knoll, the victims of the Bataclan, Hyper Cacher and Charlie; it is an ideology called anti-Semitism and/or Islamism… Who determines what hatred is and its [distinction from] criticism? A Pandora’s box has just been opened… There is a risk of a slow but inexorable march towards a digital language hyper-normativized by political correctness, as defined by active minorities”.

Nevertheless, that is what hate speech laws do, whether in the digital or the non-digital sphere. Asking private companies — or the government — to act as thought police does not belong in a state that claims to follow a democratic rule of law.

Unfortunately, the question is not whether France will be the last European country to introduce such censorship laws, but what other countries are next in line.