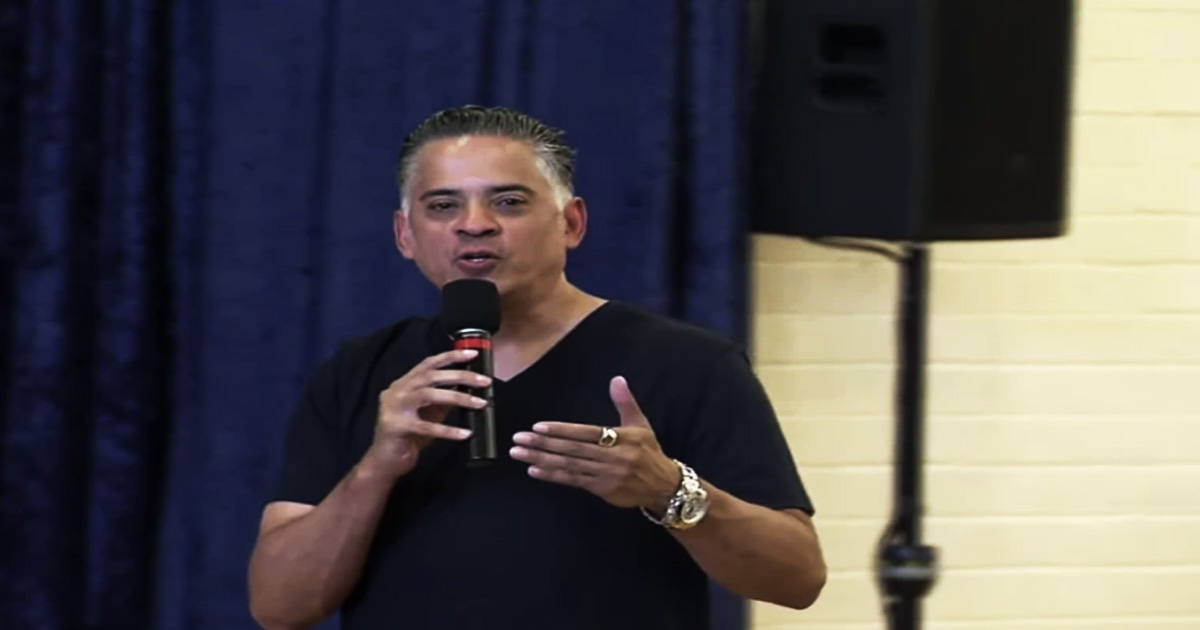 Worshipping the devil, practicing witchcraft, and delving into the occult world for decades alongside family members who were practicing witches are all memories ex-Satanist John Ramirez has of the life he lived for 35 years before turning to God.

Ramirez, who is now 57 and an evangelist, said he will never forget the night 22 years ago when he made the decision to “walk with the Lord Jesus Christ.”

On that evening in 1999, Ramirez said that God gave him a “life-altering, out-of-body experience” in which he transcended from his bodily form and went on a train that he knew was traveling to “Hell rapidly.”

In a recent interview, Ramirez told The Christian Post that during his out-of-body experience, he remembers sitting on the train, going faster than anything on the planet.

“Also, Jezebel was on the train, which is a demon principality, yelling from across the aisle, calling me a traitor in demonic tongues. The train made an explosion right into Hell and the doors were opened,” he added.

“When I came off the train in Hell, I stepped onto the ground and the ground was breathing like a human being. I encountered people in Hell that were in the occult that were still alive on the earth. God told me sometime later that these individuals were not going to repent.”

He said what he experienced was life-transforming, similar to the transformation of Apostle Paul. Today, he is an evangelist for Jesus Christ, seeking to win souls around the world and setting the captives free by the power of the Holy Spirit.

Following that night in 1999, Ramirez has devoted the past two decades to preaching the holy Gospel and sharing his testimony globally of God’s goodness in His life.

He has also authored several books, including Out of the Devil’s Cauldron: A Journey from Darkness to Light. He is set to release his new book on Oct. 12, Conquer Your Deliverance: How to Live a Life of Total Freedom.


His ministry, John Ramirez Ministries, offers multiple programs, books, and courses on spiritual warfare available online. He said his mission in Christ is to fight the good fight against the kingdom of darkness and point people to the cross of Jesus Christ. Ramirez has made appearances in various regions to share his testimony.

The evangelist was first introduced to the occult at the age of 8 by his Puerto Rican parents, who practiced Santeria. The belief system blends spirit worship and animal sacrifice with aspects of Roman Catholic teaching.

Ramirez often shares with others how he was once trained to be part of a satanic cult by witches and warlocks and how he became a high-ranking warlock in the highest level of the occult — casting powerful witchcraft spells and “controlling entire regions and Astro projecting and cursing regions under the name of Satan and his kingdom.”

Eventually, Ramirez said he sold his soul to the devil in a “diabolical, blood-soaked ritual.”

In his testimony, Ramirez shares how he would actively “recruit souls” into this “unholy kingdom” by “haunting” the bars and clubs of New York City by night to find his “next victims.”

“The love of Jesus Christ is in my heart and what He has done in my life is truly supernatural,” Ramirez told CP. “There are a lot of people who have been hurt by witchcraft and demonic forces, and I am here now to set others free because God freed me.”

“I am free in Christ,” he added. “I know my purpose and my destiny today in Christ.”

Ramirez said “one of the greatest tricks of the enemy is to pretend to make life easier and let people play into the great deception. People don’t know these consequences lead them straight to Hell.”

“People want a microwave-effect,” he detailed. “When I was in the devil’s kingdom, it was like a microwave: You get it fast and you lose it fast. But the devil comes to collect later.”

For Ramirez, it is a special and worthy experience to put his faith in God. He stressed that “when [people] sell their souls to the devil, they are giving away their purpose and their destiny.”

“Everyone’s soul belongs to God, and no one truly sells their soul to the devil because their soul will always belong to God, their Creator,” he said. “But, selling your soul to the devil is another way of saying you are devoting your focus, allegiance, and time to the devil. You are making a commitment to something that isn’t worthy and that is not a good return in the end.”

But even people who sell their soul to the devil, Ramirez added, will have to “face God at the end of time in the final judgment.”

Ramirez recently made a guest appearance in California. He shared a sermon, his testimony and participated in a Q&A for an audience at the “Explosive Spiritual Warfare & The Prophetic” event live-streamed on YouTube on July 17.

At the event, Ramirez told viewers that God is calling him for East Coast and West Coast ministries and ministries around the world. He said God has plans for California and the world for Jesus Christ.

“There’s a spirit of pride and religion that are running Hollywood, and the altar of Satan is [located] in Hollywood,” he said as a response to an audience member’s question. “We are going to take Hollywood back from California.”

“God’s going to give an eviction notice to the enemy and around the world,” he said.

He advised churches to “never leave your post because God never created anyone to run [from where He is calling them to go].”

Coming from a past lifestyle where he attended church in the daytime and practiced witchcraft at night, Ramirez told the crowd that they could be a generation of people who know how to “fight, shake, dismantle and uproot the demonic assignment of their lives.”

“Truthfully, a religious spirit is a demonic spirit. That is the same spirit that killed Jesus. The spirit of religion is a spirit that is cancer that is killing the Church within, and the devil is into religion,” he contends. “The only way you can have Jesus is when you have a real encounter. … The fight has been won at the cross. Jesus said, ‘It is finished,’ which means [He] did everything to fight your fight. Jesus did everything to equip the saints to fight the good fight.”

He believes “many Christians run from where God is calling them to go by sweeping their assignment from God under the rug.” Many, he preached, have been “running away and not confronting the enemy who is in front of them.”

“It is time to stop talking about the enemy and it’s time to confront,” he concluded. “The battle has been won through our Lord and Savior Jesus Christ.”

The Devil and the Jews