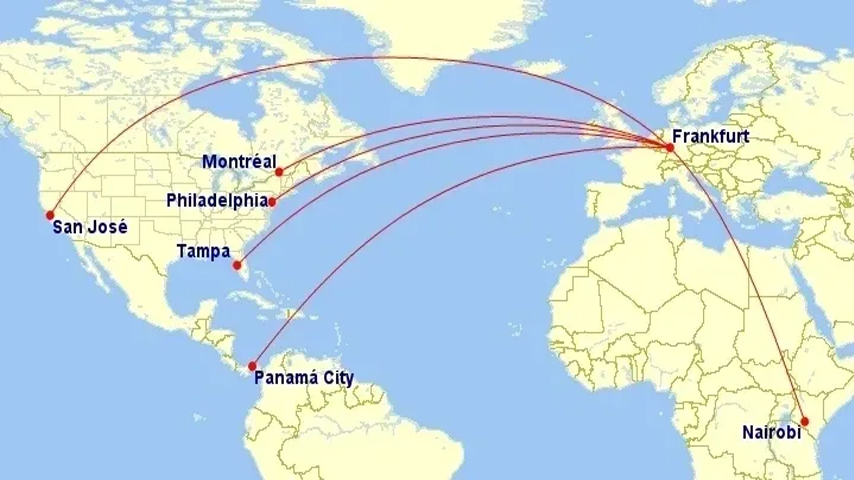 Instead of defending my position that the earth is indeed flat, I’ve decided to go on the offensive and ask you a few questions. Take a very close look at the flight routes from Frankfurt Germany to Montreal and San Jose.  Frankfurt is located at latitude 50.11 degrees North, Montreal at 45.50 and San Jose at 37.33.

On ball earth, if the shortest distance between two points is a straight line, then logically the shortest, fastest and most economical flight route from Frankfurt to Montreal and San Jose is in a Southwesterly direction. The above flight route chart to Montreal for the most part is an accurate depiction. However, the flight route to San Jose makes absolutely no sense. Why would a flight departing Frankfurt first head in a Northwesterly direction and then skim along the Artic Circle before changing course to the Southwest?  Completely illogical…

As a matter of fact, the flight track appears to cross near Greenland’s largest city Nuuk, at a latitude 64.18 degrees North. So a flight departing from a latitude of 50.11 degrees travels approximately 14 degrees Northwest, before heading Southwest to its final destination at 37.33 degrees latitude.  Does that make any sense?… At all?

If the earth was a ball, jets would have to compensate for the curvature with a constant downward trajectory. Otherwise, they would fly into space.  Actually, they would hit the sea firmament dome. Jets fly level because there isn’t any curvature. The artificial horizon instrument in the cockpit of a plane indicates whether the pilot is flying level to the horizon. This gauge is a mechanical gyroscope without a single internal electrical component, adjusting itself into an upright position indicating a level flight in relation to the ground. Therefore, if a jet followed the true curvature of the fictional earth ball, the artificial horizon should roll back to reflect curvature. The constant flat line on the artificial horizon instrument proves the horizon is always flat. In addition, the sundial, periscope, and lighthouse could not function on a round spinning ball.

Yes, the earth is flat, with a sea firmament dome above. A diamond-shaped underworld below.  It’s the floor of the universe. And ground zero of the third dimension in the first heaven. The flat earth is the only physical plane in existence…

It’s not the high-def digital clarity that holds the key to deception. Rather it’s the lens of perception through which your eyes view reality. In this case, the camera lens brings the lie into focus. There’s no denying that videos taken from above distinctly show the earth’s curvature.  However, the only curvature is in the fish eye lens of the camera. It’s not the earth that has curvature. But the lens itself creates the illusion of curvature. Like a mirage rising off a desert highway in the middle of the summer. These ultra-wide-angle lenses produce a strong visual distortion. All the while creating a wide panoramic hemispherical image, like when a fish-eye lens is tilted up or down in relation to the horizon. The result is the illusion of curvature. Tilting it down creates an orb-curved effect. Panning the shot from a low orbit position above to the flat earth below displays the mirage of an orb curved effect.

We’ve been programmed to believe we live on a magical, rotating ball with a circumference of twenty-four thousand nine-hundred and one miles. What we believe is the earth’s curvature is, in fact, the vanishing line of perspective from your point of view. The flat horizon changes in relation to your vantage point. Whether it’s viewed from ground level or a jet at thirty-five thousand feet, each flat horizon will have a different line of perspective.  A boat disappearing over the vanishing line of perspective comes back into view through a pair of binoculars. An impossibility if the earth were a ball. There’s a reason they call it sea level. Water will always find its level.

Our indoctrination began in kindergarten, focusing our innocent, impressionable eyes on the ubiquitous, fictional ball. So thorough was our brainwashing that we believe a magical, invisible force called gravity makes the oceans, buildings and people stick to the fictional round ball, all the while spinning faster than the speed of sound. Gravity is why people in Australia don’t fall off the earth. Truth be told gravity doesn’t exist. Rather, it’s a question of density.  If it’s lighter than air, it rises. If it’s heavier than air, it falls. No gravity; just density.