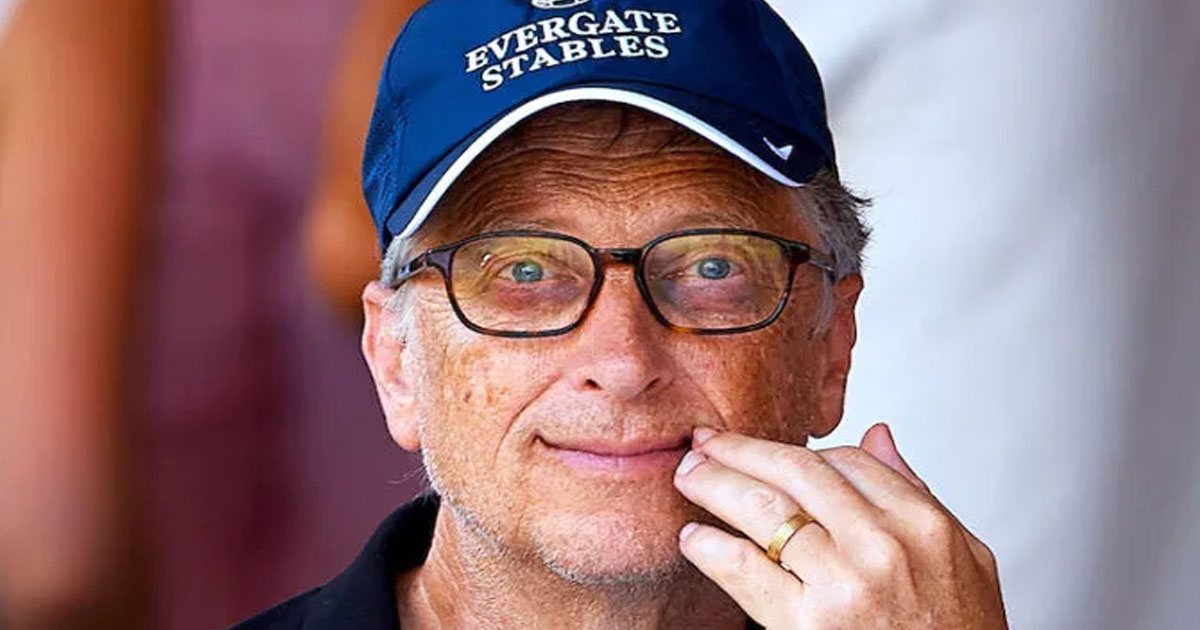 Not only did Bill Gates repeatedly hang out with a convicted pedophile, but he was also known among friends as being a ‘filthy pervert’ who hired sex workers and attended naked parties, according to bombshell new claims.

In a new interview, Wallace admits that Gates was ‘no choir boy’ when he thought the cameras were not watching him.

“A lot of those Microsoft kids back then, they were young guys in pizza-stained t-shirts for two or three days working on software code,” the former Seattle Post-Intelligencer investigative reporter told the Daily Mail.

“Then they would have some pretty wild parties, where they would go out and get strippers in Seattle and bring them over to Bill’s home.”

In 1997, Wallace’s second book on the billionaire, Overdrive: Bill Gates and the Race to Control Cyberspace, described the naked sex parties at Gates’ Laurelhurst, Washington home in even more shocking detail.

They “didn’t report on the wild bachelor parties that Microsoft’s boyish chairman would throw in his Seattle home, for which Gates would visit one of Seattle’s all-nude nightclubs and hire dancers to come to his home and swim naked with his friends in his indoor pool.”

Dailymail.co.uk reports: Wallace wrote that Gates’s ‘womanizing’ also put a strain on his nascent relationship with his now-estranged wife Melinda.

‘Though Gates began dating French [Melinda’s maiden name] in 1988, he continued to play the field for a while, especially when he was out of town on business when he would frequently hit on female journalists who covered Microsoft and the company industry,’ the author wrote.

‘His womanizing was well known, although not well reported, because Gates and Microsoft spoon-fed stories to industry writers for such papers as the New York Times, and none of them wanted the flow of information to stop.

‘French was well aware of Gates’s womanizing, and consequently, their relationship ran hot and cold. At one point, they broke up for nearly a year, reportedly because Gates refused to make any kind of commitment. When they got back together again in 1992, however, the relationship grew closer and stronger.’

Gates’s longtime friend and former Microsoft executive Vern Raburn corroborated the book’s claims in an interview with DailyMail.com and revealed how the tech billionaire’s alleged womanizing even extended to ‘infidelity’ during his early relationship with Melinda, which began in 1988.

Raburn admitted that Gates ‘liked to party and was not faithful to Melinda when they first began dating but was ‘very proud of the fact he hadn’t done any of that since the couple wed.

But the Eclipse Aviation founder added that ‘to the best of my knowledge’ Gates was faithful to Melinda after their 1994 marriage.

‘In fact, I had dinner with him one night. He said he was very proud of the fact that he hadn’t done any of that since he got married.’

The 70-year-old, who has known Gates for decades and was one of Microsoft’s earliest employees, said that the software guru and his wife may have grown apart in recent years, and ‘didn’t always share the same interests in their multi-billion-dollar charity the Bill and Melinda Gates Foundation.

He added that the couple are ‘good people’, saying: ‘I truly hope Bill and Melinda end up being happy. I went through a divorce myself maybe 12 years ago. Anybody who tells you they have a good divorce, they’re lying through their teeth.’

Amid the super-rich couple’s split announced this week, rumors have begun to fly that Gates has reverted to his old bad behavior.

TMZ reported Thursday that Melinda rented Calivigny Island in Grenada for $132,000 a night for the whole family – except Bill.

The site claimed his wife and family are ‘furious’ at him for some unspecified alleged incident, and that the couple had been trying to hash out a divorce agreement for months.

Though their divorce documents do not specify a prenuptial agreement and instead reference a current private divorce contract, Wallace told DailyMail.com that the couple did in fact get a prenup in the 1990s.

In his book, the author wrote Gates shied away from asking Melinda’s signature himself, instead of getting his close friend and former Microsoft CEO Steve Ballmer to persuade her.

‘According to knowledgeable sources, however, Gates did, in fact, sign a prenuptial agreement with French [Melinda’s maiden name],’ Wallace wrote.

‘Gates could not ask French himself, so he talked his pal Ballmer into convincing her to sign. Ballmer, according to those sources, explained to French that the agreement was for the good of the company.’

Speculation around his relationship with his ex-girlfriend, Silicon Valley venture capitalist Ann Winblad was immediately following the announcement of the Gates’ split.

Despite breaking up in 1987, Gates and Winblad still vacationed together alone for a weekend every year throughout his marriage to Melinda.

The billionaire philanthropist even reportedly had the agreement formalized ahead of his 1994 marriage.

Reports have always described the Microsoft founder’s current relationship with his ex as purely platonic.

On Tuesday another bizarre and unsubstantiated theory emerged on Chinese social media: that he had been having an affair with a 36-year-old interpreter who works for the Bill and Melinda Gates Foundation.

The claims linked Gates to Zhe ‘Shelly’ Wang, a Seattle-based translator and former air hostess who started working for the charity in 2015, among other gigs in her freelance translation business.

‘I thought that the rumors would go away by themselves, but I did not expect the rumors to become more and more crazily spread,’ Wang reportedly wrote.

‘How many books can I read, so why spend time on the unfounded rumors? I would like to thank everyone for their concern and help in dispelling the rumors through private messages in the past 24 hours.’

Another sticking point in Gates’ marriage could have been his renowned intensity and single-minded focus on his work, as Wallace told DailyMail.com his interviews with the billionaire’s exes revealed he could be a taxing partner to be with.

Wallace told DailyMail.com that even as a multi-millionaire following Microsoft’s early success, his ex-girlfriends described him as frugal to a fault.

‘[Gates and his then-girlfriend] were supposed to be at a software conference in Seattle and they were running late,’ said Wallace. ‘But Gates is driving around all over these blocks near the conference because he doesn’t want to pay for valet parking, he wanted to find a meter that he can put a few quarters into.

‘This is a guy who’s already a multi-millionaire, his company is already public, and he’s driving around looking for a parking meter that he can put quarters into because he says ‘I don’t want to pay for valet parking, it costs too much.’

Other girlfriends described the software guru as aloof to Wallace.

‘He could be doing two or three things at once. They’d be driving along, he’d be talking at her, and his mind would be processing software,’ the author told DailyMail.com.

Winblad told Wallace in an interview for his 1997 book that early relationships with Gates were more of a ‘test’ than a romance.

‘This is not just a serendipitous choice,’ she told the author about Gates’ proposal to Melinda. ‘A relationship with Bill early on is a test. Are you smart enough? Do you have enough common sense? Can you make the grade? Are you athletic enough?

‘Melinda is Bill’s pick. He could have chosen any woman as a wife for life. He has chosen her, and that means she is an exceptional woman.’

Wallace said he doubted Gates would return to his naked pool-partying days. But even at age 54 the Microsoft boss still enjoyed a bash.

In 2010 he was photographed ‘dancing Paris Hilton-style’ on a banquette with a group of young women at a Sundance Film Festival party sponsored by Microsoft.

Page Six reported the billionaire ‘gyrated in a VIP booth until 2 am and that ‘everybody was snapping photos of him until his security rushed him out the back door after he tipped a waitress $500.’

The tech founder reportedly pulled dance moves including air guitar, fist-pumping, the Swim, and the Jackhammer.

Members Of Brazil’s Parliament Broke Into Hospital That Claimed To Have 5,000 Infected & 200 Dead From COVID19 – The Hospital Was EMPTY