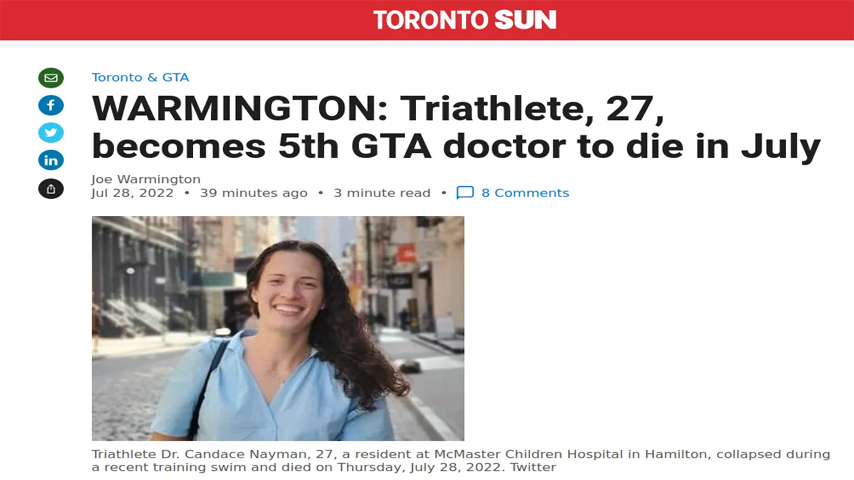 Four Ontario Doctors Have Died This Week. Suddenly and Unexpectedly…

From the Toronto Sun article:

In all four cases, their hospitals made it clear their deaths “were not related to the COVID-19 vaccine.” … The cause of death in Dr. Nayman’s case has not been released.

“ hospitals made it clear” with no investigation or autopsy….

It is being rumored that there are more than five doctors who suddenly died in the last three weeks:

Meanwhile, the University of Toronto has announced it’s bringing back its vaccine mandate for students living on campus for the Fall semester and will require they all receive boosters.

“…As per a COVID-19 planning update released on July 28, “Recently, U of T reinstated the vaccination requirement for students and employees living in University residences. Students living in residences this fall will be required to have a primary series of a COVID-19 vaccine and at least one booster dose before moving in.”

“Implications like injuries and deaths don’t matter when you have strategic alliances with government organizations and foundations such as Defense Advanced Research Projects Agency (DARPA), Biomedical Advanced Research and Development Authority (BARDA), and The Bill & Melinda Gates Foundation“:

Moderna SEC Filing: We May Be Delayed or Prevented From Receiving Full Regulatory approval. Unexpected Safety Issues Could Significantly Damage Our Reputation and That of Our mRNA Platform