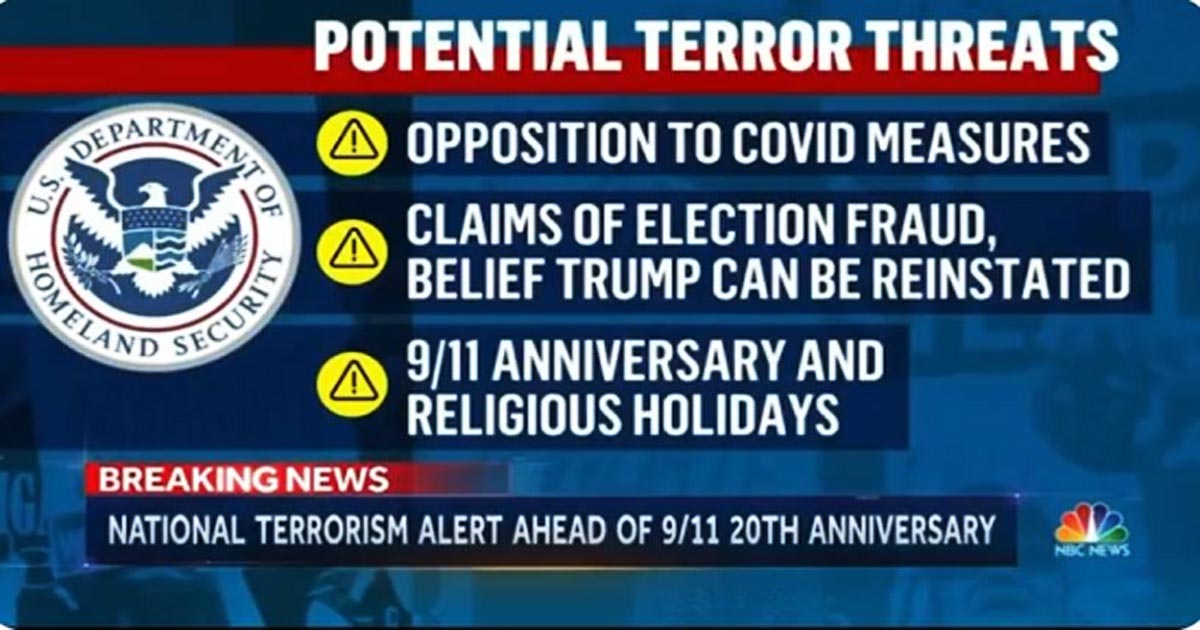 Just as we repeatedly warned would happen, the corrupt, criminally-run federal government has just declared war against the American people. In a widely-circulated Homeland Security warning, the federal government declared that anyone who opposes vaccines, masks, social distancing, or lockdowns poses a “potential terror threat” to society at large. Dubbed a “National Terrorism Alert” by CIA-run NBC News, the warning also insists that anyone who thinks there was fraud in the 2020 election might also be a terrorist.

Never mind the fact that Democrats and the left-wing media spent the last four years decrying total fraud during the 2016 election, claiming “the Russians” stole the election. Back then, such declarations were declared to be patriot… but today, they’re considered terrorism.

According to the criminally-run government that has deployed biological weapons against its own people, it’s not “extreme” to demand mass injections with experimental, deadly spike protein bioweapons shots, but it’s totally extreme to resist being suicided via a vaccine. The memo even warns that new lockdowns and restrictions are coming, and anyone who opposes them is a terrorist by default:

These extremists may seek to exploit the emergence of COVID-19 variants by viewing the potential re-establishment of public health restrictions across the United States as a rationale to conduct attacks.  Pandemic-related stressors have contributed to increased societal strains and tensions, driving several plots by domestic violent extremists, and they may contribute to more violence this year.

This “national terrorism alert” from DHS is really just an admission that the deep state plans to launch false flag attacks in America and blame the unvaccinated. No doubt the FBI is rapidly recruiting crisis actors to firebomb a hospital (or some such thing) while CNN’s cameras capture the staged action and broadcast their propaganda around the world. The actors throwing the Molotov cocktails will, of course, all be on the FBI payroll and dressed in MAGA gear in order to demonize Trump supporters at the same time.

The purpose of the DHS warning is to set the narrative in advance of their own event, and we should carefully note they’ve given themselves almost 90 days (until Nov. 11th) to pull this off.

Astonishingly, this announcement by DHS that half of Americans are suddenly terrorists is nothing less than a declaration of war against the American people. This illegitimate government — which only stole power by rigging the 2020 election — now sees the people it claims to represent as enemy combatants to be targeted and destroyed.

While the American people are being demonized and targeted, the U.S. southern border remains wide open (on purpose) so that the nation can be flooded with millions of illegal aliens who will replace the soon-to-be-dead Democrat voters who have lined up to commit vaccine suicide. As obedient, brain-dead Democrats die from Antibody-Dependent Enhancement, they will be replaced by a wave of illegals who will be handed voting rights in order to try to keep Democrats in power.

The deep state plans to use their upcoming false flag event as a way to criminalize all anti-vaccine speech and declare a medical/military dictatorship in America, with troops running highway checkpoints that demand to see your vaccine papers any time you cross a state boundary. Should you fail to present the proper vaccine papers, they will arrest you at gunpoint and haul you off to one of the CDC-run covid death camps that have already been publicly announced by the CDC, which insists these death camps will meet “minimum humanitarian standards.”

We advise all Americans to take the following precautions during any public protests:

Get full details in this emergency alert message that exposes the coming false flag “terrorist” attack in America, being waged by the deep state itself: