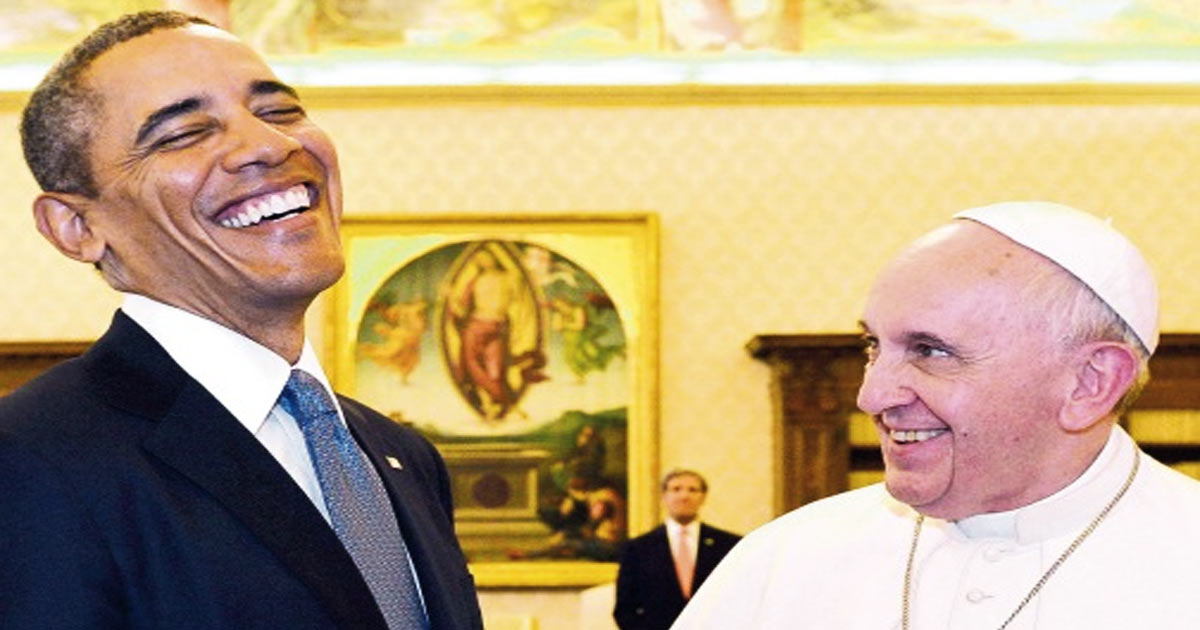 It was a celebration of all things strange, sexual and satanic at the Roman Catholic religion’s Vatican Hall on January 8. Pope Francis reportedly invited a group known as “Aqua Circus,” Europe’s response to “Cirque du Soleil,” to dance around on stage and pay homage to the reptile “jesus” idol perched up in a display behind him.

During this postlude to Rome’s General Audience event, Francis tossed a hula hoop to the “artists” in the performance troupe who were acting out a tale about a mermaid and a man under the sea trying to fight contamination of the ocean. In other words, the purpose of the show was to offer worship to Francis’ god of global warming and climate change.

In the below video footage, watch as creepy Francis smirks with satisfaction at the pagan performance happening right in front of him. And keep in mind that Vatican Hall itself is shaped like a giant serpent, both inside and out (pictures of Vatican Hall are available at Now The End Begins):


For more related news about the false religion of Roman Catholicism, be sure to check out Deception.news and Evil.news.

Is Pope Francis the false prophet eagerly awaiting his antichrist’s rise from the ashes?

As you’ll notice, the overtly satanic imagery was everywhere at this spectacle. Besides the shape and design of Vatican Hall, which is clearly meant to resemble a snake – think Garden of Eden if you’re missing the insinuation, here – the dancers, which looked like a bunch of ambiguously adorned drag queens, further represent the new race of genderless, sexless cyborg beings that will populate the New World Order.

This is what the satanic Baphomet image is supposed to represent, in case you didn’t know: a part male, part female, part animal, part artificial intelligence (AI) robot being that will exist as earth’s new race of fake humans once the LGBTQP agenda is fully implemented.

And how about that creepy “art” image of fake jesus rising from an “atomic apocalypse” behind Francis the entire time? This 1977 creation by Pericle Fazzini depicts the false messiah rising from the ashes after what would seem to be a catastrophic global disaster of some kind.

If you look closely at the fake jesus in Fazzini’s statue creation, you’ll see that he’s been given a reptile head, further revealing this creepy to be that of Satan himself, and certainly not the real Jesus.

“In the Bible, Satan is pictured as a reptile who will have a coming war with King Jesus at the Battle of Armageddon at the Second Coming,” writes Geoffrey Grider for Now the End Begins, about which side of the battle Roman Catholicism has embraced.

“Revelation shows us that the Genesis serpent had an ‘upgrade’ along the way and now is a giant, red-headed multi-headed dragon, though still a reptile.”

Whether you personally believe in all of this or not is irrelevant, because Roman Catholics and Francis certainly do. And it’s all coming to pass just as the Bible said it would, with Francis vying for the false prophet position in this apocalyptic narrative.

Keep in mind that the climate change narrative being pushed by Francis and his ilk is a religion in and of itself, and one that requires worship in the form of not eating meat, not using fossil fuels, and embracing the LGBTQP “rainbow” as the new global standard for civilization – just like Sodom and Gomorrah, and we all know what happened to those places.

“The Vatican loves dead things, and creepy things, and perverted things,” Grider also notes. “Things like the circus that Pope Francis invited to the reptilian Audience Hall on January 8, 2020.”