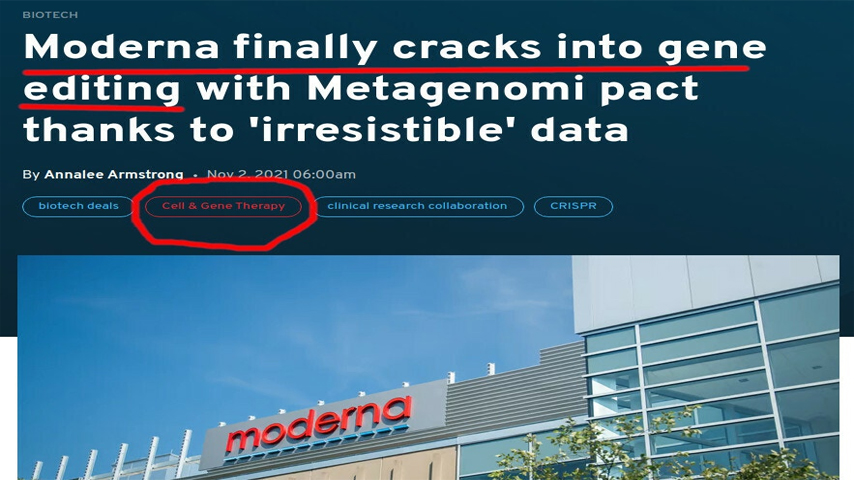 This post exposes lies and omissions by Moderna and “fact checkers”, who dishonestly claimed that mRNA injections cannot change human DNA. I will show that during this time, Moderna was secretly working behind the scenes to modify human genes.

I recently wrote a series of posts about mRNA “Covid Vaccines”, unexpectedly reverse transcribing into human DNA and creating strange DNA genetic codes in human cells, including code of a p130 tumor gene, as well as permanent DNA code to produce spike protein.

While this was contrary to the promises of how “Covid Vaccine makes harmless spike protein and goes away in 2-3 days”, more and more science experiments confirm that mRNA “Covid vaccines” have far-reaching and disturbing permanent genetic effects.

Since then, I came across new information about Moderna going full speed with commercializing mRNA technology that alters and purposely edits human DNA.

This is incredibly dangerous.

Amazingly enough, this news was not reported widely in mainstream media.

First, read my two previous articles if you have not yet:

Pfizer mRNA DOES Integrate Itself Into Human Cellular DNA

The glowing and uncritical article in Fierce Biotech, inadvertently confirmed some of the allegations highlighted in my articles.

A statement from Moderna made in 2021, therefore, was already known to Moderna to be false:

Now that Moderna is commercializing mRNA gene-editing after having worked on it for years, we know that the above statement was a lie.

What is Moderna seeking in this Metagenomi deal?

It appears to be two things:

Should we applaud or fear these highly secret developments?

Allure and Dangers of Gene Editing

First of all, gene editing is a topic that we need to think about, rationally, extremely critically, but with an open mind. For example, according to 23andme, I supposedly have a “diabetes gene”. This is not a gene that I would like to have, or pass to my offspring. (too late) I am aware that “diabetes genes” are not completely negative and they offer some survival advantages. However, editing out a diabetes gene is something that I can at least entertain as an intellectual possibility.

The dangers of gene editing are multifold. For those, like me, who believe in evolution: our genetic systems evolved for billions of years, through evolution, incremental improvement, and trial and a lot of error on a planetary scale.

The result of this billion-year evolution is decidedly imperfect, but results in a working, resilient, sophisticated and robust human and animal ecosystem where different and diverse animals and humans live, grow, fight, reproduce, resist diseases, etc. As the last two years showed, we humans can easily fight off even the worst lab viruses created by evil experimenters, using our innate immune systems evolved over millennia.

For those of us who believe in God, human genetics was designed by God for us to be in His image, to be used by us to live, think, make mistakes, fall in love and reproduce. Our genes make us wonderfully diverse.

The genetic code, for religious people, is literally God’s program for every human being. Changing this (as opposed to fixing bodily injuries by surgery, for example) is a direct affront to God’s coding of our most sacrosanct internal “program”.

Human gene editing is by its nature “transhumanist”, where human bodies are altered to go beyond our natural path of development.

Thus, even though we people can think about anything, including “gene editing”, we need to look at it with maximal skepticism.

Whether we believe in God or in evolution, in any case, our current human knowledge and safety procedures are simply not there to support something as dangerous and far-reaching as gene editing.

What can go wrong? Let me give you a shortlist that I would like to augment by what you would also suggest in your comments:

As the last two years have shown, “science” failed us in numerous ways:

I changed my mind: Do not touch my diabetes gene, please. And do not tread on my genes.

Hospice workers are being taught how to KILL patients using protocols

Health Officials Deny Even One Death From COVID Jabs