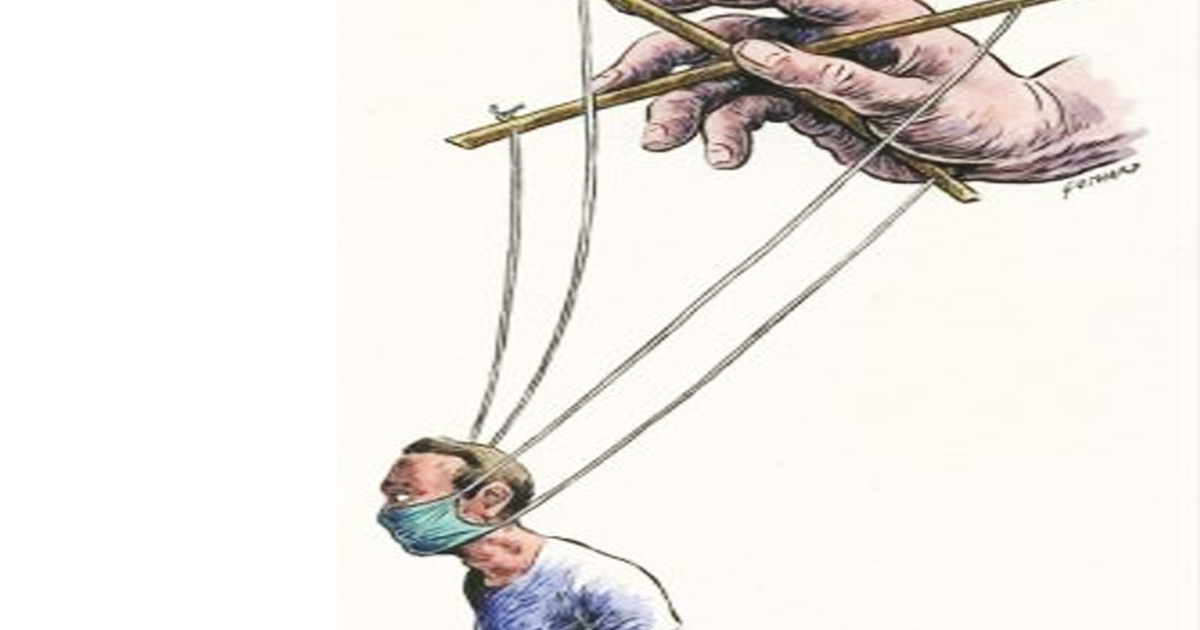 When the government is complicit in faking an epidemic that destroys millions of livelihoods and spends billions on untested vaccines from companies protected from any liability;

When Bill Gates/WHO say there will be no return to normality without mandatory vaccinations;

When rioters, arsonists, and looters get the support of elected officials and CEO’s, cops and athletes “take a knee;”

When criminals are released and police defunded;

When a student is suspended for wearing a MAGA cap;


When casinos and abortionists remain open but churches are shut;

When the Democrat Party platform replicates the Communist playbook;

When public officials are trannies you know that sick is healthy and the Satanists’ Great Reset has begun. The fake pandemic is a pretext to cull/enslave the useless eaters and downsize society.

When the President declares Antifa “domestic terrorists” and does not arrest the funders; When he says he’ll stop tech bias, and fails to regulate them;

When the father of Attorney General William Barr gave Jeffrey Epstein his first job. You know they both belong to the same satanist cabal as the Communists, just another (Zionist) branch.

Civilization has slipped its moorings; its defenders are strangely impotent.  Hope for the best but prepare for the worst.

We have allowed our worst enemies to control all the levers of power and now face the consequences.

In a powerful article below, Eric Peters says people who reject the covidhoax (wear the mask) will be ostracized from society, like Jews in Nazi Europe: “We’ve been down this road several times before but have lost the ability to read the signs.”

The Sneeze Police and Worse to Come

Armed government workers will do anything for money. Your money. They used to take it for “speeding.” Now it’s for sneezing. And not even that. Here’s a video out of Florida of an undercover AGW relieving a victim of $110 for the “crime” of not wearing a Face Diaper . . . momentarily.

There is a Gesundheitsfuhrer Order in North Miami that all persons must wear one, all the time – no matter how healthy they are and regardless of the threat to their health, both physical and psychological. The Diaper Decree is being enforced by undercover AGWs such as the one in the video linked above – who failed to ticket himself after he, too, partially removed his Diaper…

Lots of “cases” – very little chance of death or even symptoms for most people. Hence the nonstop shrieking out of the idiot box – out of everywhere – about the cases! the cases! …

Forcing healthy people to wear a Face Diaper is a Humiliation Exercise, not fundamentally different from requiring them to drape a bedpan around their necks. It serves the same purpose.

Diapering is being imposed for reasons other than “stopping the spread”  . . . by spreading hysteria. The daily barrage – as in the news coverage above – of the cases! the cases! – without any context.

Which eerily suggests another ululation from a long time ago.

One of the local government thugs seen in the video above said that Diapering is evidence of  . . . “community” and that those who don’t Diaper “may not be part of the community.”

Some may recall another time when certain people were forced to wear a piece of government-decreed external identification that also marked them out as  . . .  “not part of the community.”

And what happens to people who aren’t considered “part of the community”?

The people who deserve what they get?

Echoes of Auschwitz, getting louder.

Today, the bad and dangerous ones are those who don’t wear the government-ordered piece of external identification. But it serves the same purpose. It marks them out as being “not part of the community.”

The intent – then and now – is to systematically turn a segment of the population into a pariah class for the benefit of the political class.

It begins with official and then societal harassment of the pariah class – the former making the latter socially acceptable. The pariahs are demoted to second-class citizens; they are denied of basic rights such as the freedom to enter a store and shop – or even to walk around outside among the general public.

Eventually, they are denied everything.

All of it egged on by the social pressure of the rest of the population that acquiesced to it – and whose metastasized resentment becomes hatred of those who haven’t.

It gets out of hand fast – because it is hard to stop once it begins.

The herd tramples everything before it, sieg (or health) heiling all the way. Then as now, the effort to whip up a hysterical mass of people willing to do or at least not condemn anything that is done to the pariah class is being sold as a matter of . . . public hygiene.

Necessary steps to eliminate a bacillus.

The things that were done then were spoken of – justified – in precisely those terms. The health of the community.

They are being spoken of again, in the same terms.

We’ve been down this road several times before but have lost the ability to read the signs.

People wondered, once: How could it have happened in such a civilized country? America is no different – and could prove to be far worse.

But this go ’round, who is going to stop it?

That’s up to each one of us. Don’t join the herd. Don’t countenance the abuse of anyone else for not behaving like one of the herd.

Stand up for them – and there may be someone left to stand up for you, too.

The Globalists’ Solution To Plandemic: A New Treaty That Essentially Creates A World Government (NWO)