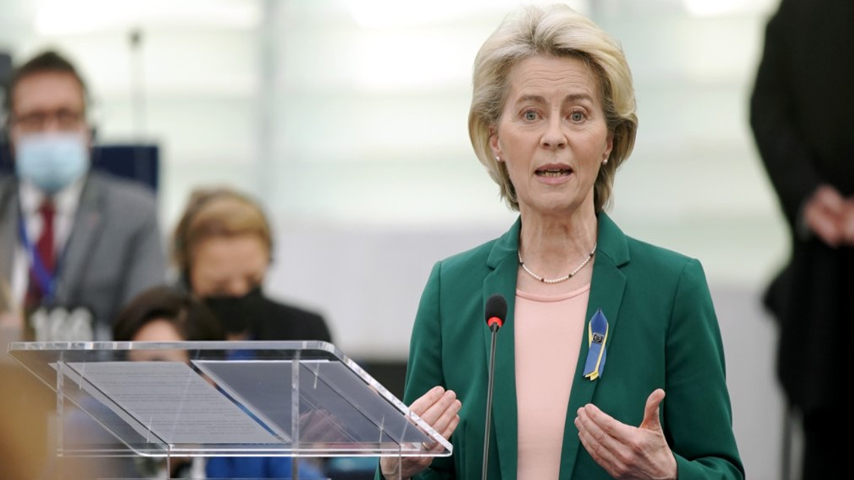 EU President Ursula von der Leyen paid a visit to embattled President Zelensky in Kiev. She handed him the first documents with which his warring country can become a candidate for EU membership. Ukraine may join the EU sooner than usual, she has said.

In addition, she was the first Western “leader” (the global elite’s designation for an unelected bureaucrat) to visit Bucha, where hundreds of bodies of Ukrainian citizens were discovered. She looked at 20 exhumed bodies from a mass grave and lit candles in a church for the victims.

These locations are highly problematic in themselves since US intelligence has admitted that the purpose of the information on Ukraine is designed to deceive the Americans and the world public about the reality of conflict.

Three US officials told NBC News this week there was no evidence for example that Russia had used chemical weapons in Ukraine. They confirmed that the US had released fake information. This may include assertions about the alleged “massacre” in Bucha as well as the bombing of a train station in Kramatorsk.

Von der Leyen’s presence in Bucha is part of a journey she is on with EU foreign affairs chief Josep Borrell “to strengthen support for Ukraine“.

Her dismal performance has attracted a lot of criticism. For example, Dutch neurologist Jan Bonte commented: “Can someone transport Von der Leyen to an asylum? Forced admission with indefinite confinement in an isolation room? This person is crazy. Dangerously crazy.”

Lawyer and philosopher Raisa Blommestijn added: “On what does Ursula von der Leyen base the idea that she has the mandate to decide whether or not Ukraine should be allowed to join the EU? In 2016, the Dutch population spoke out against an Association Agreement with Ukraine.”

In 2016, two-thirds of Dutch voters had opposed any political, trade and defense treaty, showing the depth of antipathy in the Netherlands towards the enlargement of the EU and especially Ukraine. GeenPeil, a cooperation between the website GeenStijl and the organisations Burgercomité EU and Forum Voor Democratie, organised the campaign to collect the required signatures. They successfully deployed a web application to collect, print and deliver the required signatures to the Dutch Electoral Council (Kiesraad).

“That the EU-Ukraine Association Agreement would be the first step towards EU membership has been called a silly conspiracy theory. It was supposed to be ‘just a trade deal’. EU expansion is unstoppable, so that’s why [we need] Nexit!” said FvD Member of Parliament Martin Bos.

Freelance journalist Arno Wellens responded: “What is it with those Germans? Ignoring local democracy and building a European super state, under German leadership, against the Russians. The last three times it also ended in misery, this time it will be no different.”

Ukraine may now join the European Union sooner than later. The president of the European Commission promised Ukrainian President Zelensky speedy admission on Friday. Visiting the president, she said forming an opinion on Ukraine’s accession would only take weeks, something that could normally take years.

Von der Leyen handed Zelensky a questionnaire as the starting point for the EU to decide on membership. Ultimately, it is up to the 27 member states to decide whether or not to admit Ukraine. All countries must agree on this.

Zelensky said he would come up with the answers in a week. He also called for more sanctions against Russia, in order to persuade Moscow to stop its operation in Ukraine.

Von der Leyen underlined the importance of the sanctions. “Russia will fall into economic, financial and technological decline, while Ukraine is moving towards the European future, this is what I see.”

At the end of February, Ursula von der Leyen had already spoken out in favor of Ukraine joining the European Union. Her comments were curious because Ukraine had not yet qualified as a candidate country – it was also before the Russian operation. The Ukrainian parliament had its wish to join the EU included in the constitution in early 2019. The country’s goal was to apply for a formal membership application by 2024 with the view of joining by 2030.