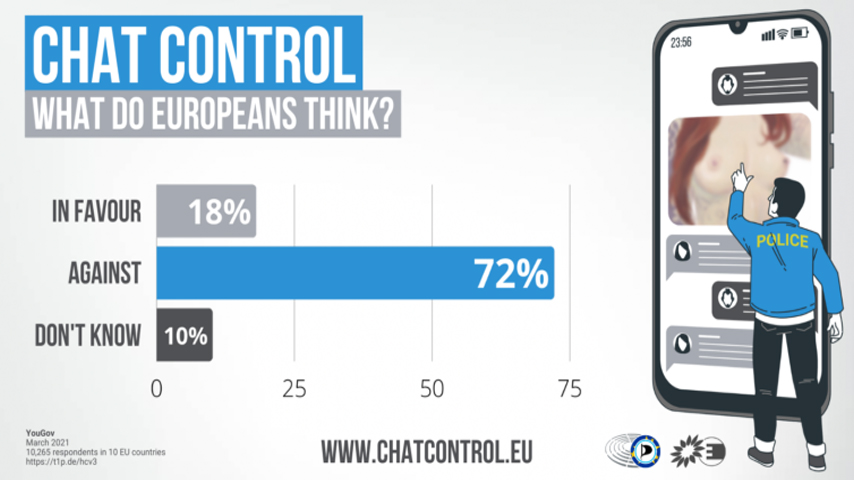 On Wednesday, May 11, 2022, the EU Commission will present an EU draft law on mandatory chat control to the public for the first time. Although almost all Europeans are against its deployment…

Similar to Apple’s highly controversial “SpyPhone” plans, the Commission wants to oblige all providers of email, chat and messaging services to search for suspicious messages in a fully automated way and forward them to the police in the fight against “child pornography”.

This will require them to monitor and scan the communications of citizens en masse – even if they are still securely encrypted end-to-end so far.

Doing so, the new law “would undermine the essence of end-to-end encryption” and would “make the EU a world leader in the generalized surveillance of whole populations. How, then, would the EU be able to speak out when undemocratic regimes enact the same measures?“

“This spying attack on our private messages and photos by error-prone algorithms is a giant step towards a Chinese-style surveillance state. Will the next step be for the post office to open and scan all letters?

“Opening the door to foreign intelligence services and hackers is completely irresponsible. To stop chat control, the net community must go to the barricades as!”

In March, 35 organizations worldwide, including the German Lawyers Association, Digitale Gesellschaft, and the Committee to Protect Journalists (CPJ), had warned against the EU’s chat control law.

The German government coalition agreement states on the topic of chat control: “We reject measures to scan private communications.”

Meanwhile, on May 9, 2022, Yesterday, a Member of the European Parliament and digital freedom fighter Patrick Breyer (Pirate Party) filed an action for an injunction against the so-called chat control against Facebook’s parent company Meta Platforms Ireland Limited at Kiel District Court. [PB1, PB2]

Meanwhile, on May 22, the WHO plans to strip 194 nations, and the US, of sovereignty…

Creating A Personal 3D Avatar: To Live Your Life For You