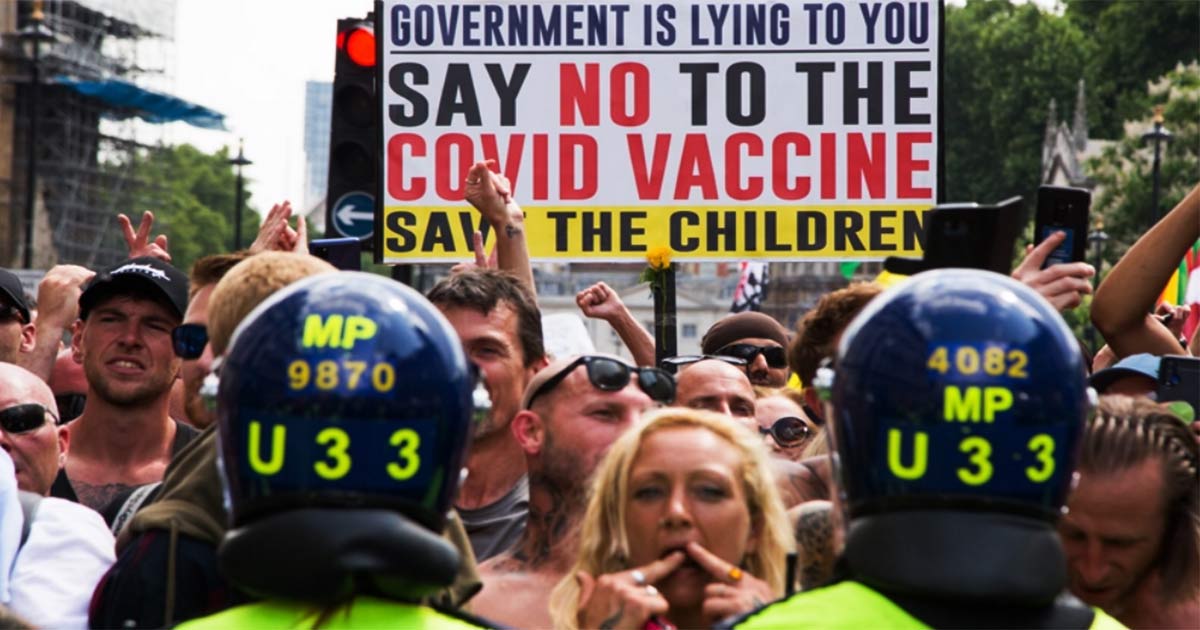 Massive protests erupted across Europe and Australia on Saturday against mandatory COVID passports and continuing lockdowns.

Tens of thousands of people are mobilizing in demonstrations in England, France, Italy, Australia, and even Finland in retaliation of their government’s announcing draconian “health passes” to determine the vaccination status of citizens.

Huge protests are being documented in Sydney, Melbourne, and Brisbane after the government’s announced more nationwide lockdowns following the country’s third COVID death in 2021, all of whom were at least 70 years old.

Sydney 🇭🇲 Anti Lockdown 💥 Epic Scenes, Sydney says Enough💥 Considering MSM has said most of Sydney is allegedy infected and or dead, this is one mighty large Celebration Of Freedom. 💥👊 pic.twitter.com/uAqEEsxlvm

Melbourne 🇭🇲 Anti Lockdown Anti Govt BS 💥 Excuse the crude narration in the background, it's been going my so long, it was all too much for me to handle. Long Live Freedom 💥👊 pic.twitter.com/OZdkEu3OCU

Protests kicked off in Trafalgar Square in London after Prime Minister Boris Johnson declared on “Freedom Day” that lockdowns will continue and that vaccines will be required.

Thousands of people are campaigning against vaccine passports, face masks and further lockdowns in Trafalgar Square today as part of The Worldwide Rally For Freedom.#talkRADIO | #londonprotest pic.twitter.com/wd5waFDEr2

Protests have been ongoing in France for the last week after President Emmanuel Macron announced that citizens face 6 months of jail time if they refuse to provide their vaccination status at places like bars or restaurants.

Scenes in Paris, Valence, and other cities on Saturday show an enormous number of protesters in the streets, with police retaliating violently with batons and water cannons in some cases.

The protest in Paris, France against the Macron government domestic vaccine pass is massive. pic.twitter.com/K20R1GMRCN

Protests in France against vaccine passports and mandatory vaccination. pic.twitter.com/7119e1P52T

In France tensions rising at one of the hundreds of protests. People have had enough of tyranny pic.twitter.com/L31n3YeRob

So, the people of France get water cannons for anti-vaccine protests, but we couldn’t bring these out in every city that was being destroyed by ANTIFA and BLM during the #BidenRiots? UNFAIR!pic.twitter.com/IxOjrhM8ye

Thousands protest in the streets of Valence, France against the government’s vaccine passport. pic.twitter.com/yH4WpGwMva

Today over 275 huge protests against vaccine passports reportedly expected all over France 🇫🇷 and Italy 🇮🇹 And many other European countries. pic.twitter.com/moG9wDXmVS

Protest against Italy’s “green pass” vaccine passport.
We the people will fight back against tyranny. pic.twitter.com/SraFVWjaeS

NOW – Thousand take it to the street in #Turin as Italy makes Covid "green pass" mandatory for most public places.pic.twitter.com/8QJnFMhjJd

Although Japan has resisted harsh lockdowns in anticipation of the upcoming Olympics, many residents still protested against the vaccine after seeing the creeping tyranny finally show its face in Europe.

Truly a historic day for Freedom.

In addition to France, thousands are also protesting in Dublin, Ireland against forced vaccinations.🇮🇪pic.twitter.com/QIK7OwQAiV

Citizens around the world are tired of the fascist oppression.

In addition to France, protests & rallies were held in Cities across Canada, Australia, Finland, Ireland & more.

Part 8
Netherlands
Thousands on the streets of Amsterdam pic.twitter.com/BzlimoJZfo

The world is waking up! Will the globalists back down, or double down?