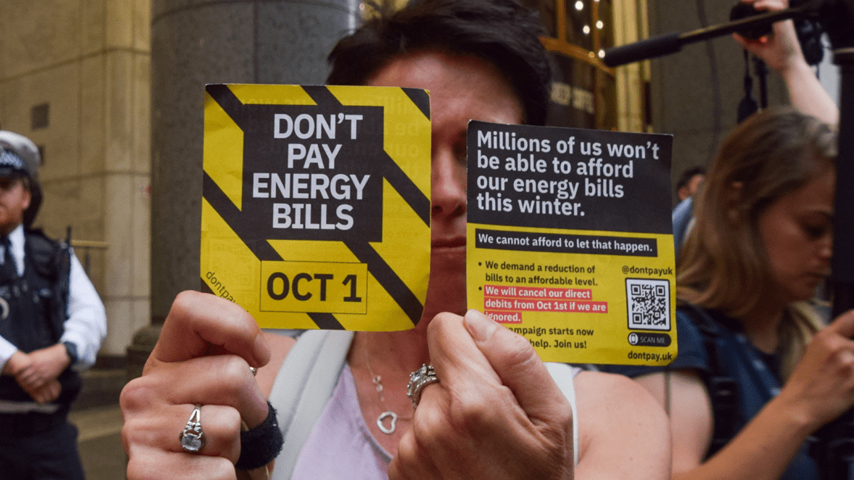 Many Europeans are at risk of choosing between food and heating this winter.

The British have had enough. A petition started by a grassroots organization, Don’t Pay UK, to boycott U.K. energy bill payments is gaining traction as the country faces its worst cost-of-living crisis in a generation. As more and more people are threatening to slip into poverty due to high inflation, they want to enforce a broad boycott wave against the sharply rising electricity prices.

The UK’s Office of Gas and Electricity Markets (Ofgem) raised the cap on annual energy bills by 80% on August 26 amid soaring gas prices across Europe and energy generation shortages at home. The new cap is set at £3,549 (around $4,189) and will go into effect from October 1, 2022, to the end of the year, which is expected to rise further. This will put many Brits at risk of choosing between food and heating this winter. According to Don’t Pay UK, 6.3 million British households will slide into energy poverty due to the sharp price increases.

The group aims to attract at least one million Brits to their campaign. The hope is to pressure the government and energy companies to end the crisis and ensure that energy bills remain affordable for ordinary citizens.

As of Tuesday, the grassroots movement had racked up more than 170,000 signatories who pledged to cancel their direct debit payments to energy companies on October 1, when household bills are set to skyrocket.

LBC News spoke with a ‘Don’t Pay UK’ campaigner who calls on Brits to join in on collective action to protest against rising energy bills:

Campaign organizers say supporters will enact their pledge if 1 million signatures are amassed before the October deadline.

However, the Times recently reported polling that shows 1.7 million people across the country are planning not to pay their energy bills.

It's a simple idea: We demand the govt scrap the energy price rises and deliver affordable energy for all. We will build a million pledges and by Oct 1st if the govt and energy companies fail to act we will cancel our direct debits. Read more here: https://t.co/NPF8VQXcHD pic.twitter.com/E4gPenIXiL

Russel Brand, who was a big proponent of Canada’s Trucker Convoy, recently voiced his support for the Don’t Pay UK campaign on his popular YouTube show:

Thanks @rustyrockets for the support!

Together, we’re building a mass movement to resist the crisis, which will accelerate on oct 1 with the extortionate increases.

We all need to work together to defend our communities.

The government has dubbed the movement irresponsible, warning that it could cost consumers even more money in late payments. Furthermore, they warn that unpaid bills could lead to lawsuits and seizures and affect creditworthiness. The government said that global energy prices could not be controlled.

The group “bill strike” takes inspiration from the mass non-payment of the poll tax in 1990, when 17 million refused to pay Margaret Thatcher’s community charge (reversed the following year).

At the end of August, Scottish citizens gathered outside the Ofgem energy regulatory building in Glasgow to protest against high inflation, the surging cost of living, and price tags on food and fuel.

Scots burned their electricity bills outside Ofgem’s headquarters while they shouted: “We don’t pay!”

The UK is not the only European country protesting excessive energy bills. Local in Naples decided to imitate the Scottish workers and protest against the soaring energy bills crisis people in Italy are now facing. Citizens gathered in front of the post office in Piazza Matteotti and burned their bills in an iron bucket as they shared the effects of the rising power bills.

After Naples, Italian people also burn their energy bills in Terni, Assisi, Bastia, Foligno, Gubbio, Norcia, Spoleto, and many other cities: “We don’t pay! Now that’s enough!” It will be a very hot autumn in Europe and beyond.

After Naples, Italian people also burn their energy bills in Terni, Assisi, Bastia, Foligno, Gubbio, Norcia, Spoleto and many other cities: "We don't pay! Now that's enough!" It will be a very hot autumn in Europe and beyond. pic.twitter.com/tJcdoPloRb

Over the past several weeks, shocked citizens in Ireland have been posting photos of their shockingly high energy bills amid the ongoing and worsening energy crisis.

“Several of the posts were from small business owners who are getting absolutely crushed right now and won’t be able to remain operational much longer,” reports Zerohedge.

“One such owner is Geraldine Dolan, who owns the Poppyfields cafe in Athlone, Ireland – and was charged nearly €10,000 (US$10,021) for just over two months of energy usage.” 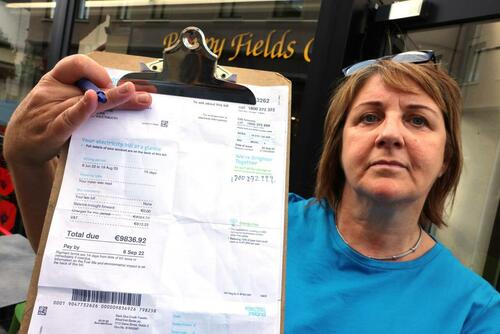