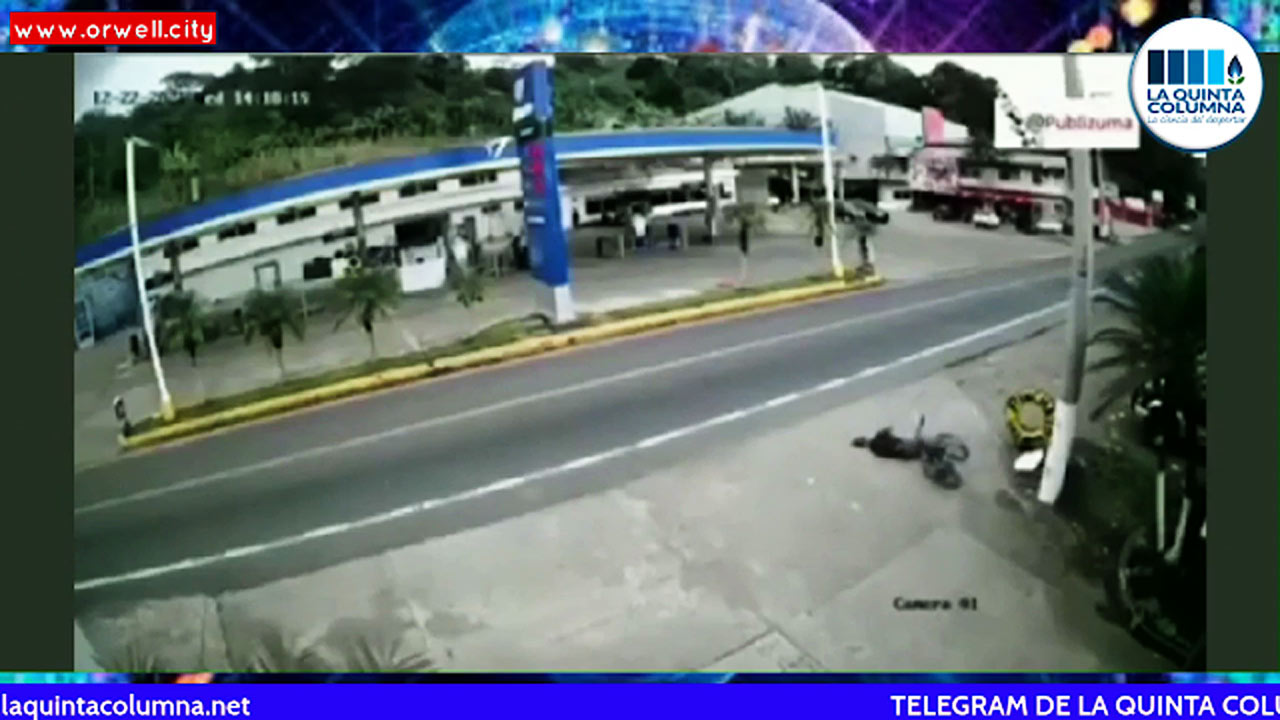 La Quinta Columna commented on a video in which an electromagnetic pulse causes the death of a man. The video shows a glitch that occurs at the precise moment when the man falls straight to the ground.

According to Spanish researchers, electromagnetic pulses are seen as interference in-camera recordings when they occur.

Ricardo Delgado: We’re going to watch a video now, José Luis. First, I want you to see how… We showed it at the beginning. We’ve been very struck by a cyclist captured on camera, and he dies a sudden death. He dies as if he’s been shot. And just at the moment he falls off the bike, there’s a glitch in the recording. It’s as if he had received an electromagnetic pulse.

Ricardo Delgado: Watch it. We’re going to play it a couple of times so you can take a good look at it. We’ve got it here. It’s going to happen at the second 23. Let’s see if it loads now. Let’s see… Now. Well, pay attention. He stops right there, at the lamppost and stays there for a second. It’s probably waiting for cars to pass by or something, I guess. Notice when there’s an anomaly in the camera footage. And this coincides with the moment of his collapse. There’s a glitch. Did you notice it? And the man falls suddenly. Let’s go back a little bit. Let’s see it again. There. Very clear.

Dr. Sevillano: This is an evidence more than… Come on… It’s impressive. That’s more than clear proof of why people are getting off the roads and so on. Right. This is the proof. Because it’s no longer a matter of the guy falling over from something internal to him, but there’s an external trigger that’s caught on camera. What a great video. Keep it as if your life depended on it. That’s gold. That would explain why so many people are suddenly dropping dead here and there right now.

Ricardo Delgado: It looks like a gunshot, but it’s an electromagnetic pulse at the speed of light. And that it’s also being recorded by the camera as glitching, which is normal.

Ricardo Delgado: Right. And if, in addition…

Dr. Sevillano: And it stops working.

Ricardo Delgado: And if the person is vaccinated and has graphene already located in the heart… And if in addition, the person is exercising… Well, it’s impossible to be clearer.

Dr. Sevillano: That was a pulse multiplied by graphene. But a pulse alone could do the same even without it.

Dr. Sevillano: But with that… Hey, how many people are telling us that they notice palpitations because of the density in the waves lately? A lot of people. A lot. Or that they feel in a strange atmosphere when they go outside as if they were in a spaceship. Or that they go out to a planet that is not ours. It’s a strange feeling. All those sensations are due to electromagnetic fields.

But if they’re pulsed like what we just saw, they can create a disaster because there’s a short circuit. What works stops doing so. And until it starts up again —if it starts up spontaneously and naturally, because it may not start up again in such ways— you lose consciousness. Some people recover and say, “What the heck happened to me?” But in some people, the process is so fast that they don’t recover again. They end up in a cardiorespiratory arrest, and it’s over.

Those are really good images. It’s the first proof, let’s say, that there is a cause that could be triggering the famous sudden attacks from the outside. That’s a proof.

Someone might say, “It’s just a coincidence!” Yes, it’s one for those who don’t know anything about all this. For those of us who know this and know what’s out there and where it’s going, that’s proof.

Ricardo Delgado: Now we’re going to have to put cameras in all the areas because it could be that…

Dr. Sevillano: It’s a good idea because nobody is thinking about retrieving the recordings and broadcasting them. What’s more, the police will be retrieving them because they have a record of what happens on all the highways. They have the place where people are recorded, overtakings, etc.

I’m sure they go back and take a look. They see those glitches yet don’t attribute them to anything. Because they don’t know what they’re seeing. I say again, the one who doesn’t know is like a mole. They don’t have a clue. You’re seeing it, yet you’re not noticing it. That’s the problem when you don’t have the knowledge. And the one who knows about this goes looking for those signs. “Oh, you have a recording? Where? When? The car? Give it to me, give it to me. I want to watch it!” The other is not even going to notice the glitch. But you will be like: “Look where the interference is.” “Have you seen what’s happening in the car at the same moment? Well, that glitch means that this car…”

But that requires intelligence, neurons that, it seems to me, are quite scarce in some people. And between people who don’t want to use them and those who should but choose not to, all this is going to go unnoticed in the end. Very few people are going to notice.

This is akin to a Columbo investigation, Ricardo. I’m sure you’ve seen the Columbo episode where the guy catches the bad guy on camera footage. Well, this is the same thing. Operation Columbo took place today. We’ve caught them with a camera.

Proof: Teens With Myocarditis Are Having Heart Attacks