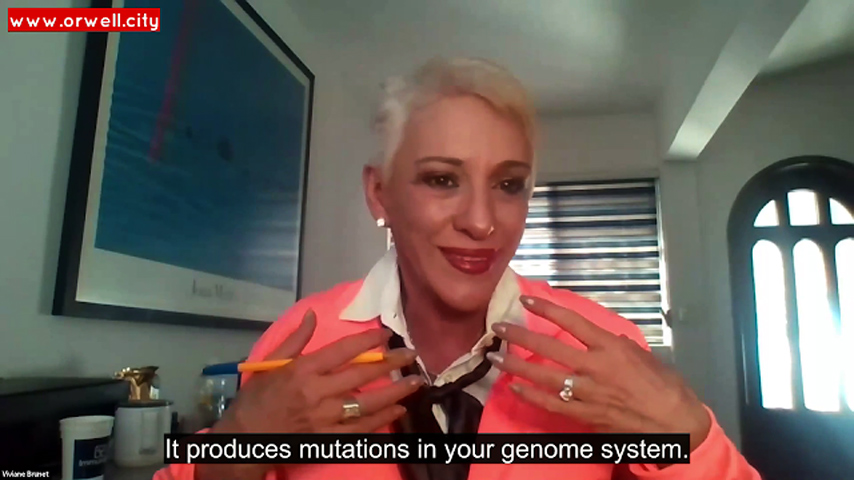 Dr. Viviane Brunet, gynecologist and researcher, has once again warned about the dangers of the misnamed COVID vaccines.

Dr. Viviane Brunet: These are inoculations. We cannot call them vaccines. Inoculating this poison before conception… That’s to say, before the union of ovum and spermatozoon. In couples, when both individuals are already vaccinated and decide to procreate, we have been seeing babies born with characteristics totally different from normal human beings. It’s called transhumanism.

And we all have videos of babies that have been born in these circumstances where we see that their genome changed.

Why? Because the inoculum is mutagenic. It produces mutations in your genome system. The genome is the complete sequence of the deoxyribonucleic acid, which is your genes. So, they changed genes.

When inoculated during pregnancy, we have seen 6000% more abortions.

Those little roots —let’s call them like that— of the placenta, and that forms together with and inside the uterus in what’s called decidua. At that point, it’s no longer endometrium. It’s decidua. That’s to say, it just changes its name. But if there are clots there, the amount of blood that reaches the baby obviously decreases. And then we have babies that die. The great majority of them.

Others are born hypertrophic. That is, with very low birth weight, depending on their gestational age. We have babies of 39 to 40 weeks, at the end of pregnancy, who are born with a kilo and a half of weight. There’s a decrease in amniotic fluid, which is the environment that protects the baby from changes, temperature, shocks, and so on. There’s a decrease. And a fetus with oligohydramnios can’t survive. That’s to say, it can’t survive with a low amount of amniotic fluid inside the abdomen of the maternal uterus. We have deaths of the pregnant patients. And, obviously, with the death of the patient, there’ll be the death of the product of conception as well.

So, I’m totally against the inoculation of these misnamed vaccines in the whole population. But especially in pregnant patients and in children.

From Social Media to Napping, The List of Reasons Healthy People Die of Heart Attacks Seems to Be Growing

Celeste Solum – Graphene Vaccines Could Turn Us into “Something Unimaginable”