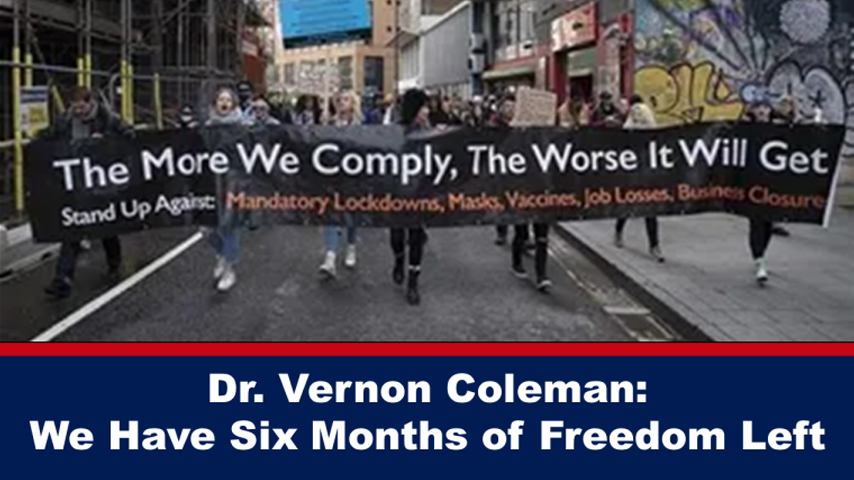 In April 2022, I made a video in which I predicted that we had eight months of freedom left.

I stand by the timing.

We now have six months left – and that takes us until Christmas 2022.

I’m not suggesting that we’re all suddenly going to die by Christmas.

What I am suggesting (and this is in some ways scarier) is that things are now moving so fast that unless we stand up and defend ourselves we will be too far along the road towards an existence built around the principles of social credit; too far along to stop progress towards the Great Reset.

Everywhere you look there is evidence showing just how fast the conspirators are making progress.

First, look at the global economy.

We are all heading not just for a recession but for a deep, long depression that will rival anything that took place in the 1930s.

Barbados, Lebanon and Sri Lanka have all gone bankrupt. As, of course, has Argentina. Government corruption (enjoyed by politicians and bureaucrats) is largely responsible. Just look at the corruption in the UK, for example.

Things are so bad in Sri Lanka (long independent for food supplies) that farmers can no longer afford to buy seeds. The country is begging for food.

Governments everywhere are going to push up interest rates to try to keep inflation down. And when they do that the cost of servicing all that debt is going to bankrupt millions, destroy thousands of companies and put nations in peril. No country on earth is immune. Both the UK and the USA could go into default. Services are going to have to be cut. Pensions and other payments will have to be halted.

Spending on health and education will be slashed as more and more money goes on buying bombs for the Ukraine war. The cost of rebuilding Ukraine will probably be close to a trillion dollars. Taxpayers are going to be expected to find the money – most of which will doubtless be stolen. And, as I predicted many weeks ago, western governments are preparing for war with Russia. NATO is preparing for war. And the head of the British armed forces says we must be ready for war. The only people who will gain will be the arms companies.

Everywhere you look there is economic chaos.

In China, they are talking about maintaining absurd zero covid policies for five years while they tighten up the social credit rules. Mass testing will continue and travel curbs will become tougher for those whose social credit scores are low.

It’s been deliberately created. But it’s still chaos. Pakistan and Argentina have borrowed huge amounts of money from the International Monetary Fund. Neither will ever pay back their debts. The IMF holds huge debts and effectively controls many countries – on its way to a role in the new World Government.

The same things are happening everywhere in the world. Is that a coincidence? Of course, it isn’t. It’s all deliberate.

What no one mentions is that when economies crash the number of people dying always soars. People cannot afford to eat properly and nor can they afford to keep warm. Undertakers and florists are the only businesses that can expect boom times ahead.

Local councils are heading for bankruptcy. Services are going to be cut – or slashed to protect those massive pensions paid to former chief executives and other overpaid staff. Your local library may close. Swimming pools and leisure centers are for the chop. How long will bin collections continue? How long will schools stay open? Jobs will have to be cut.

The collapse of the stock market is threatening pensions everywhere. Stock markets are already about where they were in the 1990s. If the markets crash still further then the value of pensions will also fall. Very few people are aware of just how precarious their futures are.

As the cost of food and fuel and heating soars so there will be more and more strikes. Doctors want a 30% rise. A strike or a massive pay rise will destroy what’s left of the failed NHS.

Health care is no longer available in the UK.

Even before there was talk of strikes, doctors were resigning en masse in their 50s. Why? Because they can no longer cope with the regulations and red tape introduced by the Government and the General Medical Council. The GMC’s hated revalidation scheme is utter lunacy. Doctors spend so much of their time on form-filling that they have little or no time left for patients. They find no joy in their work.

Dentists are retiring early too because of the red tape. Dentists work all day pulling and filling teeth and then routinely have to work another two or three hours filling in forms to satisfy the bureaucrats.

Meanwhile, the UK is rudderless, effectively without a government, and everything is crumbling.

Would anyone deny that our transport systems are a mess?

There is constant talk among millennial liberals of a four-day week and the importance of work-life balance. But someone has to be prepared to work if the country is to be made to work. And most under the 40s have no idea just how close we are to the edge of a cliff. There are nearly 1.5 million vacant jobs in the UK. And over five million people are at home on benefits that the country cannot afford.

Farms everywhere are struggling with new regulations. Young people don’t want to work on farms because the work is too hard. In the UK, the average age for farmers is 59. The average hill farmer grossed £15,000 last year. They’d have been better off on benefits. An astonishing four million European farms have shut down in recent years – encouraged by EU regulations designed to destroy farming and make the way for laboratory food.

It’s not surprising that food shortages are coming very fast. Within the EU there is already talk of food rationing. Food and fuel rationing is inevitable. And they’ll be controlled by an App. Electricity supplies will be controlled with the smart meters so many idiots have in their homes.

Cash is being demonized and many shops now refuse to accept cash. Citizens are forced to do everything via an App. Schools are introducing social credit points schemes to control students. We are only a few months away from a society that will be just as oppressive as China’s.

And the media lies and suppression of the truth continue.

I have been banned from all mainstream media for two and a half years now. As I explained the other day, I was even silenced when I tried to appear on the internet radio. I have a website. But for how long before that is taken down?

Too many people accept it all without a murmur.

The collective silence will be our undoing.

They are picking us off one at a time.

I estimate that we’ve got six months of freedom left unless we fight this war with more determination.

And if you think I’m exaggerating look back over the last two years. I’ve predicted everything that has happened. My old videos are still available (for the moment) on this website.

Look at a few of the old videos and you’ll soon see why I am the most banned doctor in the world.

The truth is the one thing the conspirators fear. To them, the truth is as deadly as sunshine and garlic are to vampires.