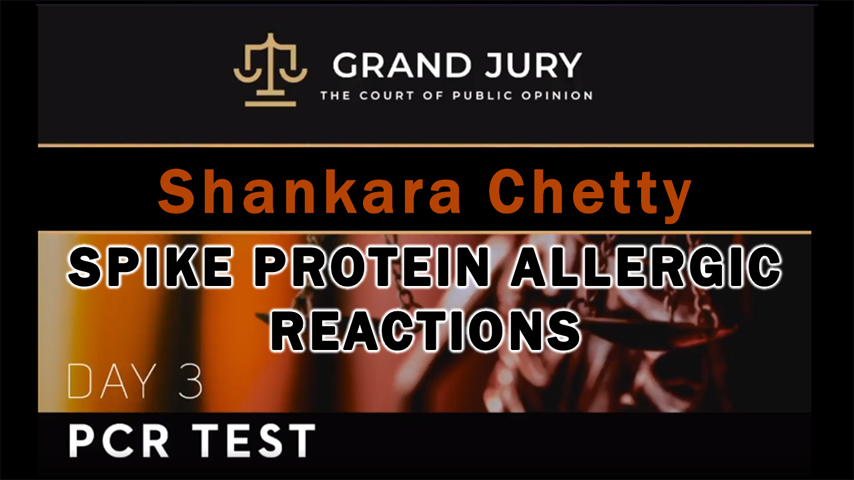 Dr. Shankara Chetty gave his testimony on Day 3 of the Grand Jury Proceeding by the Peoples´ Court of Public Opinion.  He described the research he has conducted regarding Covid.  His research concludes that severe illness caused by SARS-CoV-2 is in fact an allergic reaction to the spike protein.  He also describes the treatment protocol he has been using on his patients with a 100% success rate.

Dr. Chetty is a medical practitioner in South Africa who has a background in genetics, advanced biology, microbiology and biochemistry. And so, “I investigate everything, and I make sure that I fall back on the knowledge I’ve gained in those years of tertiary education and don’t really believe things too easily … with the controversy around hydroxychloroquine, with the PCR test being used as a diagnostic tool, with the word that there is asymptomatic spread, I had a very healthy suspicion for what I was being told. So, with the knowledge that I had, I decided that I’m going to take this [Covid] on,” Dr. Chetty said.

“I needed to get myself a toolbox in preparation for this. So, when I looked at this, we’re dealing with the respiratory virus. The first drug that came to mind was hydroxychloroquine. Hydroxychloroquine or plasmoquin is well known. It’s been used for decades, and it has a broad antiviral effect. So, if I had to look at something that will curtail the spread of a virus, I would look at that as my mainstay treatment.

“I bought up as much stock of hydroxychloroquine as I could, and subsequently, two days after I did that, the government here in South Africa pulled it from the shelves. Luckily, I had a stock of it, and I had prepared for my patients.

“Patients came to see me very distraught that I might close and I might not be available to them. But I reassured all of them that I would brave this out, and I would make sure that I examine every one of them and I needed to understand what we’re actually dealing with.”

During the first wave, he noticed that for a small subset of patients, on the eighth day, precisely the eighth day, after symptoms, for example, a sore throat first appeared, patients would become breathless. He realized he was dealing with two pathologies; the two phases of illness had no correlation between them. He worked out that the second pathology, the eighth-day illness, was an allergic reaction to the spike protein.  So, this is how he treated his patients, as he treats any allergic reaction.

“They’ve refused to accept my work on the pathogenesis of Covid illness. I think simply because I have proven that spike protein is the primary pathogen. And if you accept that spike protein is the primary pathogen, that shows the vaccines in a very dangerous light. If you don’t accept what causes severe illness and death, how can you claim that your product [vaccine] can prevent it? We know that it’s not a vaccine because it doesn’t prevent infection and transmission. Now, it exposes you to spike protein. So clearly, if you’re allergic to spike protein, the vaccine works as a desensitization tool,” Dr. Chetty said.

“So that drew my attention to something far more sinister. I knew that I was dealing with an engineered virus … Because if this was pre-planned, then it’s a preamble to ethnic cleansing. It’s an understanding of how to affect different systems and how to affect different population groups with the mutations that you engineer into a virus. And so, I knew at that point that I’m probably dealing with the bioweapon.”

Watch the full Grand Jury sessions Days 1-5 on Odysee HERE or on Internet Archive, with chapters and timestamps:

Logistic support is provided to the proceedings by the Berlin Corona Investigative Committee: website (German) or website (English).

More information about the proceedings and contact details can be found on the Grand Jury’s website, HERE.