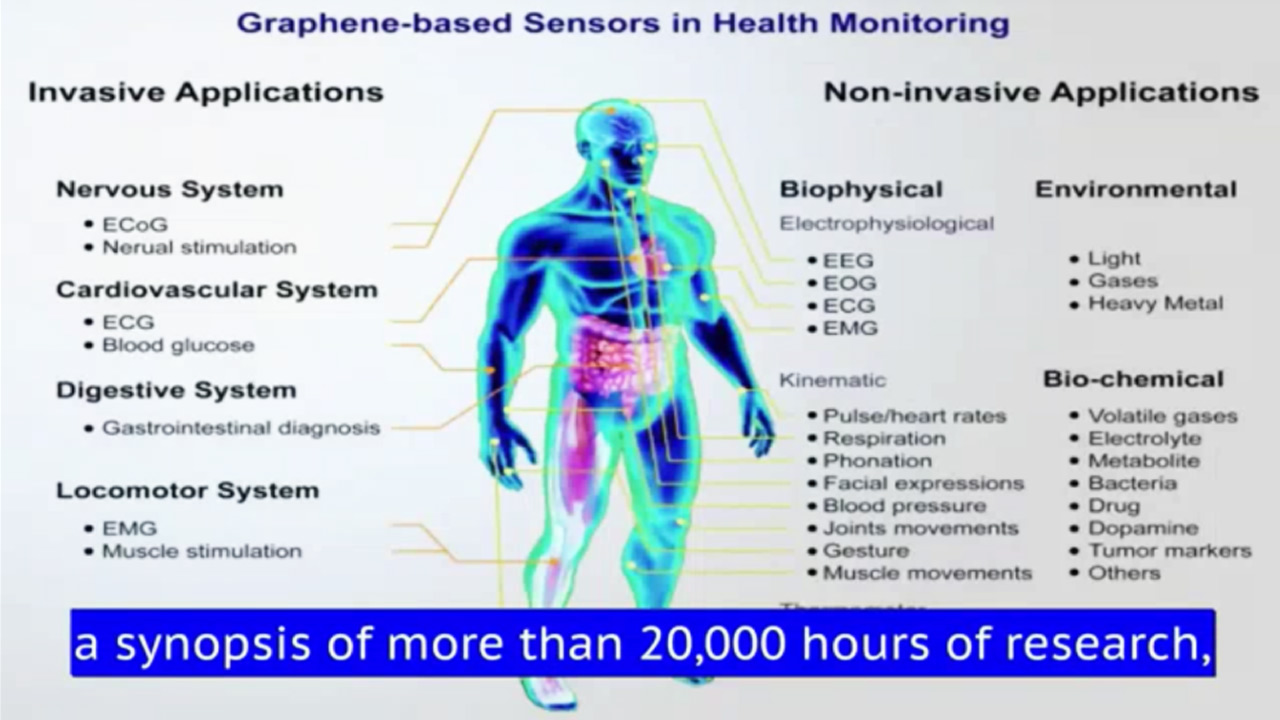 Dr. Ricardo Delgado and his team, in an explosive exposé in late June/early July of this year (2021), revealed that the toxic substance graphene oxide was in the “COVID vaccines”. This was followed up by several other doctors and whistleblowers from around the world confirming these findings. (Despite what “fact-checkers” – otherwise known as glorified “protected opinions” – have been peddling.)

Now in the video below, subtitled and dubbed in English, Dr. Ricardo Delgado gives us additional information about how this graphene oxide material is combined with nanotechnology for the sole purpose of not only depopulating the world, but ultimately changing the remaining survivors; leaving humanity genetically mutated – biologically, neurologically, and psychologically.

While it may sound like science fiction, these agendas are front and center for several organizations/”philanthropists”, who also just happen to have a prominent hold over several businesses, economies, institutions, etc. – even governmental interests:

“The first Neuralink Brain Chip implanted in a human brain connects the human brain directly to the hard drive of a physical computer. Without wires, without cables. We have biology that allows us to do this already. We have what those chips are allowing us to do.”

– What is transhumanism and how does it affect you? | World Economic Forum


“It is rooted in the belief that humans can and will be enhanced by the genetic engineering and information technology of today, as well as anticipated advances, such as bioengineering, artificial intelligence, and molecular nanotechnology. The result is an iteration of Homo sapiens enhanced or augmented, but still fundamentally human.”

“A startup has developed a contraceptive chip that could be deactivated and reactivated using a wireless remote.”

“Goldblatt hired a biotechnology firm to develop a pain vaccine. If a soldier got shot, Goldblatt explained, the vaccine would “reduce the pain triggered by inflammation and swelling,” the desired result being “10 to 30 seconds of agony then no pain for 30 days.” Such a vaccine would allow the warfighter to keep fighting so long as bleeding could be stopped. To develop new ways to try to stop bleeding, Goldblatt initiated another program that involved injecting millions of microscopic magnets into a person, which could later be brought together into a single area to stop bleeding with the wave of a wand.”

The video below is transcribed with some embellishment added for emphasis.

My sincere thanks and gratitude to Dr. Ricardo Delgado/La Quinta Columna for all of their research and their pursuit of the truth, and the person/team that provided the English translations.

All the vaccines tested (Pfizer, AstraZeneca, Janssen and Moderna), contain exclusively nanotechnology. We have found nanorouters, which also emit MAC addresses that can be registered with Bluetooth wireless technology by just using your own mobile phone and the help of an app.

We have found nanoantennas and plasmonic antennas for the amplification of these signals. We have also identified nano-rectennas (which act as rectifier bridges of alternating/direct current), codecs and certain logic gates for the encryption of these nano communications emitted from the inoculated individual to a remote server.

The main mechanisms of exfoliation of graphene oxide within the body into graphene quantum dots are: natural biodegradation mediated by the enzyme myetoperoxidase – and the teslaphoresis mechanism, which are microwave electromagnetic fields, emitted from mobile phone signals, with different frequency ranges.

Graphene oxide injected into the body acquires magnetic properties in contact with hydrogen and living cells. This is why most vaccinated people have this exacerbated magnetism at the point of inoculation, and subsequently in the upper solar plexus and the skull.

Graphene oxide has a blood clotting factor and increases thrombogenicity or thrombus proliferation. The ultimate consequence of thrombi is all kinds of cardiovascular accidents, such as embolisms, ischaemias, strokes, aneurysms, etc. Graphene oxide also has an affinity for electrical organs, such as our heart, especially when its cardiac activity increases, and therefore its electrical activity. At that moment, this graphene oxide targets the heart and inflames it, generating myocarditis or pericarditis.

In addition, graphene oxide has the ability to absorb electromagnetic radiation from our environment and multiply it with a transistor effect. Thus, it generates small discharges that cause arrhythmias in our cardiac system.

This explains why so many athletes are suffering from arrhythmias when they have increased cardiac activity. Consequences of these arrhythmias are fainting, blackouts or syncope, linked -or not- to unexpected or sudden death. A large part of our vaccinated population is suffering unexpected or sudden death when interacting near these microwave sources.

Graphene oxide also has the capacity to generate mutagenesis, chromosomal alteration and cancer… so that those people who have recently suffered tumors or neoplasms… after vaccination, will rapidly resurface a line of metastasis… and those who are completely healthy will be at high risk of developing cancer.

Graphene oxide is extremely toxic, and its toxicity is also dependent on the electromagnetic radiation it absorbs. Wherever it goes, it generates tissue inflammation, systemic or multi-organ inflammation… and a cascade of free radicals.

When the oxidative stress generated by this toxic substance inside the body breaks the equilibrium in the “redox balance” and exceeds a certain threshold above the antioxidant levels of our endogenous glutathione, our immune system collapses and favors the famous cytokine storm.

This graphene oxide, which is injected as a prime material in “vaccines”, is eliminated from the body through our lungs. But if it is irradiated whilst found in the lungs, the subsequent inflammation of the lung tissue causes bilateral pneumonia.

If the vaccinated survive the initial doses of graphene oxide injected into their blood, it will be degraded in the body by the neutralizing antibodies that are responsible for its degradation. Once the graphene and its toxicity are gone, so are the antibodies that neutralize the substance, which also triggers our immunoglobulins.

This is why people are being forced to be revaccinated every three months, in order to maintain the body’s levels of this toxic substance, by claiming that they no longer possess immunity.

In short, the non-existent, non-isolated, non-purified, non-cultivated SARS-CoV-2 presented to us in the official version and its variants, in the real version the graphene oxide introduced consciously and voluntarily in the flu vaccine of the 2019-2020 campaign.

In other words, the disease, relabelled COVID-19, is simply a graphene-enhanced acute irradiation syndrome.

Therefore, the first and basically the only artificial wave, had our elderly in nursing homes as its target population, whose flu vaccination rate is very close to 100%. Our elderly were previously vaccinated with this substance and then irradiated with the famous cell phone antennas… which suspiciously, 8 out of 10 are implanted in the vicinity of nursing homes or old folks’ homes.

The aim is to eliminate a large part of the population and use the behavioral modulation properties of graphene oxide in the field of neuroscience and artificial intelligence, for the remaining population.

Graphene oxide has a special affinity for neurons. Once installed in neurons, it generates an artificial neural network that gradually replaces the natural neural network.

When the size of graphene oxide nanoparticles is less than 35 nanometres, they easily pass through our blood-brain barrier (a membrane that protects our brain from possible damage coming from the outside) and gain access to our own neural network. On the one hand, graphene oxide manages to break neuronal synapses, so that our brain can be mapped, and literally collect information such as memories… local thoughts…sensations… emotions… or feelings.

You will now understand why during this pandemic, legislation such as “the NeuroRights Act” has been passed, in certain countries. Moreover, this graphene oxide can be stimulated remotely and wirelessly, using for this purpose the implementation of the new 4G, 4Gplus and 5G technology. All vaccinated people send their data to an external server, controlled by artificial intelligence (probably financed by Mr. Elon Musk).

This information provided is a synopsis of more than 20,000 hours of research, working with a multidisciplinary group of scientists and is based on the scientific discoveries in Dr. Campra’s final Technical Report, which provides unequivocally conclusive evidence of the presence of reduced graphene oxide in the sample of the “vaccines” produced by AstraZeneca, Moderna, Pfizer and Janssen.

This research also emerges from scientific analysis of the material and observational evidence. We understand that they have taken advantage of the general ignorance and lack of knowledge of the medical and health community regarding matters such as nanotechnology, to carry out this sinister plan of what they call “Agenda 2030”.

You can learn more about this valuable information at www.laquintacolumna.net, where you will find all the evidence and scientific articles stated here.

Since the “vaccination” process is global, we are facing the disappearance of the human species as we know it, within a few months. They call it post or transhumanism, or simply the Human 2.0 project. In that new stage, the automaton survivor will be deprived of self-thought, autonomy and free will. A slave species, diminished and entirely dependent on these technocratic oligarchies.

LA QUINTA COLUMNA is made up of millions of people around the world, who seek to maintain the essence of human beings, respect for humanity, and their dignity as a unique species. La Quinta Columna uncovered this crime against humanity, against its life and against its very nature.

Please share this vital information with all those around you.”

This is not science fiction. This is reality. This is what these global “elitists” are trying to enforce on all of humanity. These are not “conspiracy theories”, as much as the mainstream media/news will try to tell us.

The sooner we realize these agendas, and stand up and say NO, we can turn this tide around and refuse to change the fate of humanity’s conscience/conscious autonomy and freedom, into one of a bleak, desolate society run by sinister organizations programming our every move, thought and action.

She Nailed It! We All Need To Do What This Passionate Nurse Did (Video)